New and old on Westminster 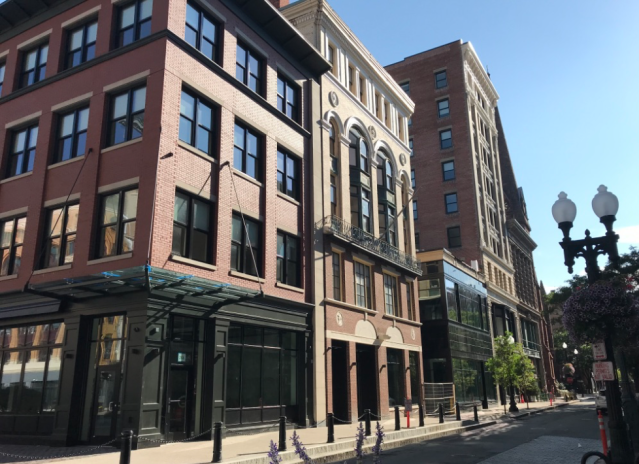 From left, the Trayne addition, the Trayne, the Wit, and the Lapham. (Photo by author)

Several years in the making, renovations on downtown’s Westminster Street between Union and Mathewson are almost done. It will take more time, and possibly the extirpation of coronavirus “and stuff” (as my son puts it), for the buildings to be fully tenanted (as the property developers put it).

The latter have dominated development here for more than half a century, stunting the city’s growth and quality of life. Flying in the face of that tedious history, the one new building and three renovated buildings on Westminster mostly improve the city’s historical character – in short, they are traditional rather than modernist in style. Traditional architecture always tends to feed historical character; modernist architecture always tends to starve it.

The four buildings in this project overseen by Buff Chace and his Cornish Associates, with Union Studio and Site Specific as design partners, constitute, then, a feast for the eye and balm for the future of Providence. Starting with the easternmost of the buildings, the project stands as follows:

The Trayne Building (1893), whose two-story faux-modernist façade was removed in the 1990s, now has an addition to its east that reads, in a totally different style, as an entirely new building, which extends into the plaza (with parking and public space) created by the demolition, in 2005, of the Brutalist 1949 W.T. Grant’s department store (for long the Travelers’ Aid Society) and John Holden Green’s 1823 Stephen Waterman House (by then almost entirely modernized). The nine-story Lapham Building (1904), which wraps around the four-story Tilden-Thurber Building (1895), now has 35 apartments and has been renovated to incorporate the poor Wit Building (1925), of two stories, between the Trayne and the Lapham. I say poor because until recently its first floor had huge plate-glass windows with a windowless faux modernist façade on the second story beneath an elegant cornice that read “Wit Building” (after a benefactor named I. Wit). The building’s modernist style shamed its classical cornice, raising questions about the “wit” (or maybe “wits”) of the designer who remodeled the exterior in the 1950s. In the first decade of this century, Buff Chace asked Union Studio to design a new façade for the building after it was vacated by the Black Repertory Theater (which had painted the faux-mod front black). In the dark as to what the Wit originally looked like (I was asked to look in the photo files of the Providence Journal, without success), Union proposed a traditional design that was grievously ignored when the time finally came to renovate the building. While certainly an improvement over its predecessor – a very, very low bar – the foreboding black tile and plate-glass façade disrupts the classic feel of the entire block, degrading an otherwise exultant Cornish project not quite fatally but most unpleasantly and inexcusably. What happened? (Someday it will be time to try again.)

Altogether, the project now has 52 apartments and space for six restaurants or shops. At the same time, Cornish’s new Nightingale Building, a block to the north on the huge Providence Journal lot across from its 75 Fountain St. headquarters (also owned and redeveloped by Cornish), provides another 143 units, bringing the firm’s total up to approximately 500 units in downtown. I thought it would be a lovely building when I first saw its brickwork going up more than a year ago along Washington and Fountain. Unfortunately, the upper story is a clunky chunk of brooding darkness that weighs down the building. The two stretches of unremitting schlock along its Mathewson and Union façades belie the brickwork that initially enchanted me. Are those two side streets chopped liver? Potted plants? They deserved a much better treatment. Again, what happened?

The surprising drawbacks in the Wit and the Nightingale are disappointing, but rather than representing a reversal of Cornish’s traditional design theme they constitute aesthetic errors that diminish the buildings themselves more than the streets upon which they sit. They are not modernist, after all, and hence do relatively little to upset the historical character that is the chief selling point of the city and its downtown.

The great urbanist Andrés Duany has said that Westminister’s ratio of street width to building height is as good as it gets, and that might be said to apply almost as well to parallel Washington and Weybosset streets and cross streets Eddy, Union, and Mathewson; also Aborn and Snow, someday, when Cornish or someone finally develops the mostly open parking lots between Washington and Weybosset.

I don’t buy the idea that covid will drive city dwellers into the suburbs or exurbs, at least not city dwellers lucky enough to inhabit such an intimate urban neighborhood as this, with most of its historical character intact. It is the only entire downtown listed on the National Register of Historic Places.

Above and below are photos I took on Thursday. I am trying to locate a copy of the rendering of the Wit Building proposal by Union Studio. At the post’s bottom is the Fountain Street end of the Nightingale Building. The building extends rightward, along Mathewson, all the way to Washington Street. 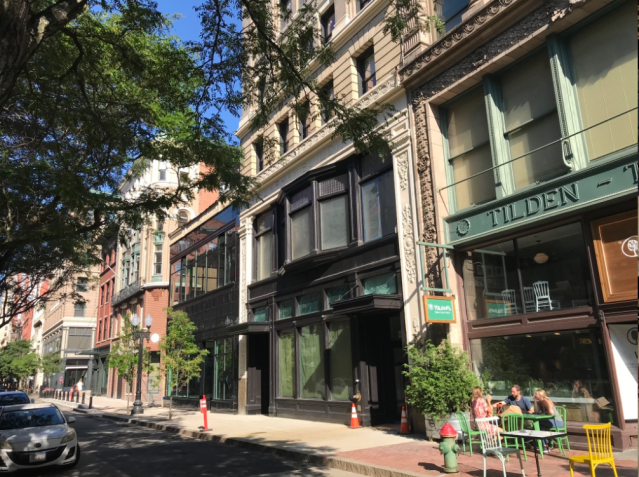 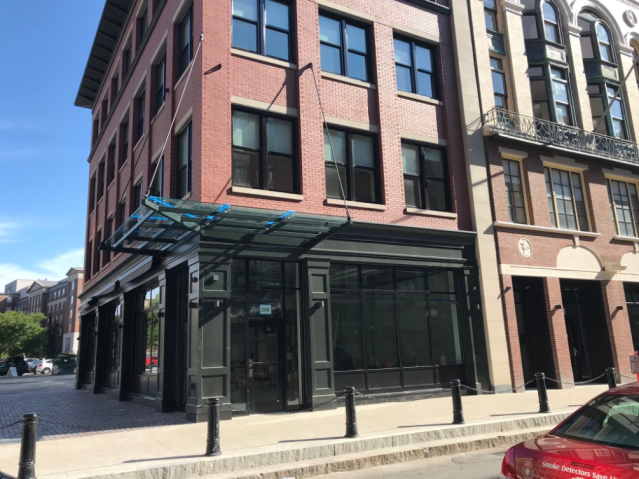 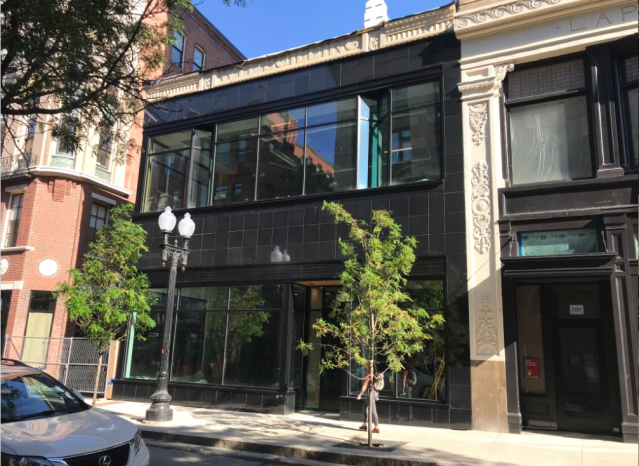 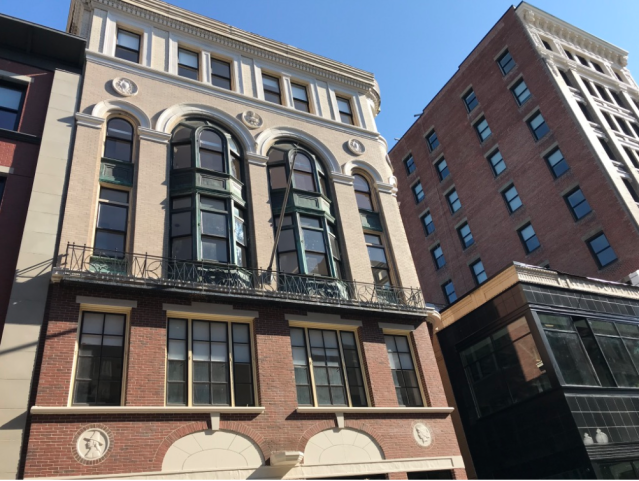 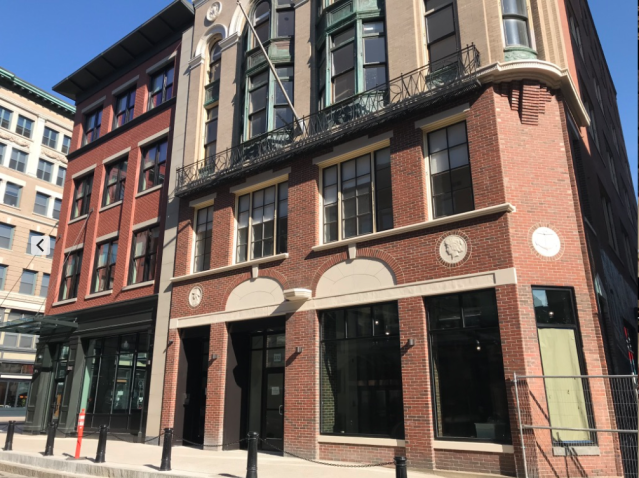 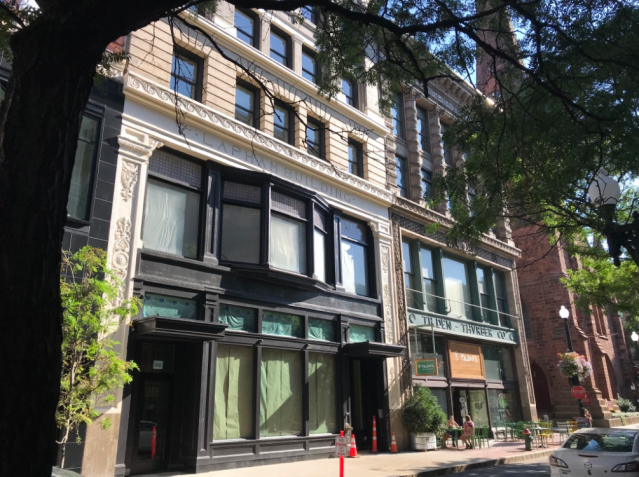 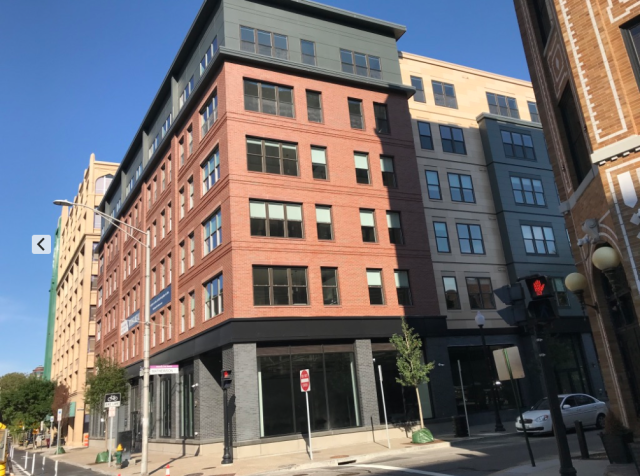 This blog was begun in 2009 as a feature of the Providence Journal, where I was on the editorial board and wrote a weekly column of architecture criticism for three decades. Architecture Here and There fights the style wars for classical architecture and against modern architecture, no holds barred. History Press asked me to write and in August 2017 published my first book, "Lost Providence." I am now writing my second book. My freelance writing on architecture and other topics addresses issues of design and culture locally and globally. I am a member of the board of the New England chapter of the Institute of Classical Architecture & Art, which bestowed an Arthur Ross Award on me in 2002. I work from Providence, R.I., where I live with my wife Victoria, my son Billy and our cat Gato. If you would like to employ my writing and editing to improve your work, please email me at my consultancy, dbrussat@gmail.com, or call 401.351.0457. Testimonial: "Your work is so wonderful - you now enter my mind and write what I would have written." - Nikos Salingaros, mathematician at the University of Texas, architectural theorist and author of many books.
View all posts by David Brussat →
This entry was posted in Architecture and tagged Andres Duany, Buff Chace, Cornish Associates, Historic Preservation, Providence RI, Site Specific, Union Studio, Urban Planning, Westminster Lofts. Bookmark the permalink.

6 Responses to New and old on Westminster