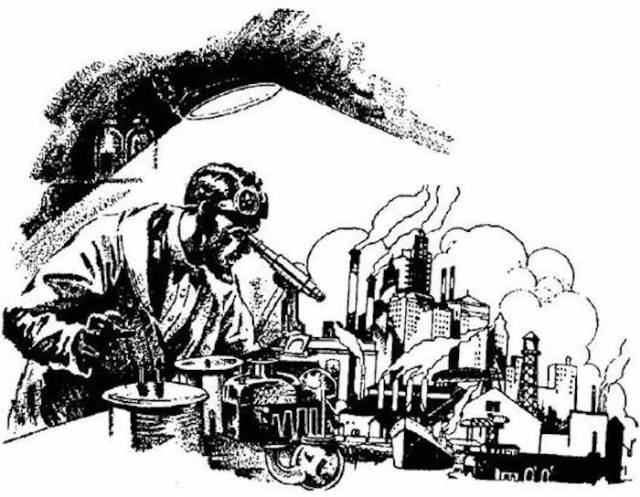 In my last post, “Modern Diner, USModernist,” I promised USModernist talk host George Smart (aka Mr. Modernism) to send him an example of my old “Ask Dr. Downtown” columns, from when I did a column of architecture criticism every Thursday for the Providence Journal, where I served on the editorial board from 1984 to 2014. In leafing through a stack of columns, I just happened on the one from Feb. 23, 2006, that may be more along Mr. Modernism’s line than any. It is reprinted below, with its usual boilerplate montage of the mad doctor examining a city through a microscope.

The doctor thought he explained in last week’s column, “Confusion of the design reviewers.”

Dear Dr. Downtown: I didn’t think you were too hard on the design reviewers. You let ’em off easy! I’ll bet they all live in nice old houses! And then they go and saddle the rest of us with ugly modern architecture. — Redundant in Dunn’s Corners

Yes, but name-calling won’t help us understand their motives. The doctor believes they have reasons that don’t seem hypocritical to them. He described their reasons at length and with excruciating objectivity in “What can they be thinking?” (June 20, 2002) before shooting them down.

Dear Dr. Downtown: Well, they’re sure not acting shot down! — Judgmental in Jerusalem

No. They still believe, to quote the doctor himself, that “since the history of downtown Providence, like every other place, is characterized by change, they see change as essential to maintaining downtown’s historical character and preventing the city from becoming a ‘museum’ stuck in time. . . . In practice, this means holding a broad view of architectural ‘context,’ or how a new building, or an alteration or addition to an old building, fits into a historic streetscape. It doesn’t have to look like an old building; it need only respect the massing, or reflect one or two stylistic particulars by aligning the cornices, say, or arching the windows. . . . They do not intend to flout the law. As professionals, they simply cannot bring themselves to interpret the law in a way that obliges them to call a halt to change, evolution, progress, the future, as they see it.”

Dear Dr. Downtown: Well, that doesn’t make any sense at all! If “the doctor” thinks that’s reasonable, then color me confused! — Baffled in Barrington

Dear Dr. Downtown: What’s the difference? Are they protecting the historic character of Providence? No! They’re not! — Not Buffaloed in Burdickville

Well, in their defense, the doctor would argue that causing “change” is not exactly breaking–

Dear Dr. Downtown: Stop! How is it possible to put up any building and not have “change”? How is that possible? — To the Point in Ponaganset

Okay, okay. It is not possible. Even an exact copy of an old building would cause change. That’s what the doctor was about to say when you cut–

Dear Dr. Downtown: Wait! Seems to me putting up a building that the public would love — that would be change! — On Target in Tarkiln

Dear Dr. Downtown: If I were the doctor, I would ask the design reviewers why they are so afraid of Providence being a “museum stuck in time”? Aren’t all the greatest, most beloved cities, the ones we go to visit, “museums stuck in time”? Why is that a bad thing? Think Paris! Think Rome! — Florid in Florida

“Florid” is exactly right. But the doctor, putting himself briefly in the design reviewers’ shoes–

Dear Dr. Downtown: Eww! Doctor! Please don’t gross us out! — Not Quite Socratic in Sakonnet

Dear Dr. Downtown: Then please tell us why the design reviewers’ definition of change is so one-dimensional? — Wondering Why in Wyoming

The design reviewers are trapped in the sophistry of the word modern. The critic Catesby Leigh has referred to their error as “the bogus Hegelian doctrine that modern times demand modern architecture.” In fact, any new building is modern by definition. And yet professionals in the architecture, planning and even the preservationist fields are caught in a time warp. While classical architecture is timeless, modern architecture is dated immediately. The modernists’ idea of the future is so yesterday. Their idea of progress looks like the Jetsons: a cartoon that was canceled decades ago! Modern architecture has turned the cities of America into a Disney dystopia, an endless Hanna-Barbera loop of flatness, sterility and herky-jerk, from which we cannot escape, and in which we are forever led over the cliff, again and again, like Wile E. Coyote!

That’s a cartoon worth rioting against. Don’t stone the Danes; stone the modernists!

Dear Dr. Downtown: You are on a roll! Tell us your opinion, Doc! — Fairly Affable in Fairlawn

In fact, no, don’t stone them. That would be too caveman. Make them live in modern architecture.

David Brussat is a member of The Journal’s editorial board.

This blog was begun in 2009 as a feature of the Providence Journal, where I was on the editorial board and wrote a weekly column of architecture criticism for three decades. Architecture Here and There fights the style wars for classical architecture and against modern architecture, no holds barred. History Press asked me to write and in August 2017 published my first book, "Lost Providence." I am now writing my second book. My freelance writing on architecture and other topics addresses issues of design and culture locally and globally. I am a member of the board of the New England chapter of the Institute of Classical Architecture & Art, which bestowed an Arthur Ross Award on me in 2002. I work from Providence, R.I., where I live with my wife Victoria, my son Billy and our cat Gato. If you would like to employ my writing and editing to improve your work, please email me at my consultancy, dbrussat@gmail.com, or call 401.351.0457. Testimonial: "Your work is so wonderful - you now enter my mind and write what I would have written." - Nikos Salingaros, mathematician at the University of Texas, architectural theorist and author of many books.
View all posts by David Brussat →
This entry was posted in Architecture and tagged Ask Dr. Downtown, Capital Center Commission, David Brussat, Design Review, George Smart, Providence Journal, Urbanism, USModernist. Bookmark the permalink.