Do the citizens of Doylestown, Penn., feel as if the new addition to their theater is giving them the eye, following them closely as they walk by? Sort of like the Mona Lisa or some dark portrait of an old patriarch on the wall of a haunted house in a horror movie?

If so, then the citizens of Doylestown probably like the new addition. 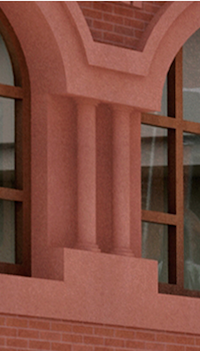 Buildings in whose façades faces can be found capture the attention of most people because their brains are fixated on faces, as they have been for millions of years. Architectural theorist Ann Sussman’s eye-tracking research on what human beings like and dislike about buildings demonstrates that the public’s preference for traditional architecture is hard-wired into our brains’ neurobiological atavism.

The addition to the County Theater was designed by George Ranalli in a style different from his firm’s usual fare, which, to put it mildly, is not quite my cup of tea. Some five years ago I wrote highly of his Saratoga Avenue Community Center in Brooklyn, but so far it and the cinema addition are the only two projects of his I could possibly like. (You can actually see a face in the rec center: it’s upper corner windows as eyes, the protrusion as nose and the window beneath it as mouth – at least from the angle in the first photo below the text of this post.)

Are they classical? Surely not. Traditional? Well, hardly. They seem to be some sort of “third way” between traditional and modern architecture, but in both cases bending the curve toward tradition and beauty in a way that even the late modernist critic Michael Sorkin was unable to resist. (See my 2014 post “Michael Sorkin’s Saratoga.”)

Not that I’m really a fan of a “third way” as a strategy for resolving the style war between the modernists and the classicists in architecture. I believe the correct way forward is to resume the classical and traditional evolution in style that was snuffed out by modern architecture in the late 1940s and ’50s. But Ranalli’s third way is far superior to anything modern architecture has to offer, as his Doylestown theater demonstrates. The theater addition has real personality, not the usual fake “Gotcha!” personality that is really tedium on stilts. Doylestown now has a building that can stand tall among the historical buildings that make it a beautiful town.

The citizens of Doylesville could have fared much worse. Two earlier versions of the theater addition would have been abominable. Doylesville civic leaders outlined a set of principles under which design work should proceed. Two earlier designs offered by another firm thumbed their noses at the character of the town, which the design principles said must be respected. How could architects possibly think they could get away with that? The town appears to be a delightful place. If its Wikipedia images can be taken at face value, Doylestown has dodged decades of modern architecture. (A deeper look elsewhere shows that modernism has not completely failed to undermine Doylesville’s beauty, but this is not evident from the Wiki images. Like postcards, tourist pamphlets or promotional videos, these often strive to portray any given city or town at its most attractive, so images of modernist buildings are often left on the cutting room floor.)

Ranalli had better be looking back over his shoulders as he approaches his office. The ornament of his Doylestown theater addition is almost Art Deco in its flouting of the modernist canon (if there may be said to be such a thing). Indeed, the detail in the inset photo above shows a set of Doric columns that will strike modernists right between the eyes. Watch out, George! Your work had already risked opening the eyes of the likes of Michael Sorkin (RIP). Don’t think the deeply modernist portfolio of your firm’s more typical work will keep angry modernists at bay. A single insult, even unintentional, can cancel out an entire career in the groves of modern architecture. No Pritzker for you, old boy!

But maybe this challenge will, in fact, serve you well. It’s about time that the world’s most moribund architectural prize program had a winner with something truly different to offer: something one might like.

But no. I’m afraid Ranalli’s work is mostly right down the Pritzker alley. These two examples of third-wayism are a sure bet not to win the second most lucrative laureateship in architecture. But if they do, I will be right up in front clapping my hands. (By the way, in case any of you modernists are wondering, the most lucrative prize, at double the money, is the Driehaus prize, worth $200,000. It is for the best classical architects.) 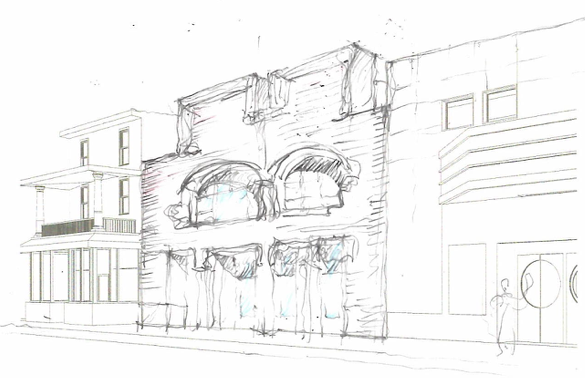 This blog was begun in 2009 as a feature of the Providence Journal, where I was on the editorial board and wrote a weekly column of architecture criticism for three decades. Architecture Here and There fights the style wars for classical architecture and against modern architecture, no holds barred. History Press asked me to write and in August 2017 published my first book, "Lost Providence." I am now writing my second book. My freelance writing on architecture and other topics addresses issues of design and culture locally and globally. I am a member of the board of the New England chapter of the Institute of Classical Architecture & Art, which bestowed an Arthur Ross Award on me in 2002. I work from Providence, R.I., where I live with my wife Victoria, my son Billy and our cat Gato. If you would like to employ my writing and editing to improve your work, please email me at my consultancy, dbrussat@gmail.com, or call 401.351.0457. Testimonial: "Your work is so wonderful - you now enter my mind and write what I would have written." - Nikos Salingaros, mathematician at the University of Texas, architectural theorist and author of many books.
View all posts by David Brussat →
This entry was posted in Architecture and tagged Ann Sussman, County Theater, Doylestown PA, Driehaus Prize, George Ranalli, Michael Sorkin, Pritzker Prize. Bookmark the permalink.

22 Responses to Eyed by Ranalli’s theater