Landscape architect Sara Bradford led the recent restoration of Providence’s Prospect Terrace, in its College Hill neighborhood near Brown University. Her late husband, RISD professor of architecture and modernist Derek Bradford, was my nemesis as I covered the city’s Capital Center Commission design review panel for the Providence Journal. For years, as a member of the panel, Bradford did his best to keep the sort of traditional buildings I favored out of Capital Center – a new district on acres of parking between downtown and the State House. More often than not, he succeeded. 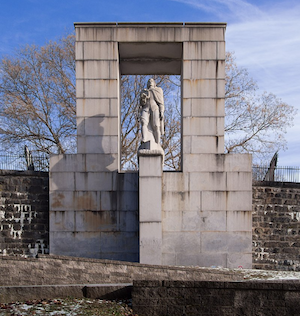 Bradford died in 2017. I was concerned when his widow, who had designed a modernist plaza between Waterplace Park and downtown’s old Union Station, was tapped to design the restoration of Prospect Terrace. I imagined the worst. Kooky, newfangled benches, sleek lampposts that cried “Of Our Time!” God knows what else. Roger Williams would weep.

Sara’s design was carried out and the park reopened on a rainy day last summer. Not long after, I visited, expecting the worst. I found instead that the new benches looked like the old benches, ditto the lampposts and wrought-iron fences. New concrete paths were speckled gently with pebbles, and the area around founder Roger Williams’s memorial was resurfaced with granite pavers. The curbing and gutters along the Congdon Street edge of the park, so hazardous for so many years, were also done up elegantly with granite pavers. Several signs describe the history of the park, one even identifying the array of buildings on view from the terrace.

It was beautiful! Pleasure and relief suffused my entire being!

How easy it is to imagine the pressure Sara Bradford must have been under to introduce some sort of twist designed to assert the park’s independence from the shibboleths of the past. The College Hill community would press for a timeless restoration rather than a timely renovation of the park. After all, the College Hill Neighborhood Association was the project’s leading sponsor. Still, the shadow cast by the design apparatchiks of Brown, RISD, the city’s planning office and the state’s I-195 commission is long and deep. I figured that Sara Bradford would know which side her bread was buttered on.

Thankfully, my anxiety was overblown.

Perhaps Sara Bradford was influenced by another long shadow, that of Roger Williams, who, cast out of the colony of Massachusetts, created Providence and Rhode Island in the spirit of the Independent Man, who can be seen from Prospect Terrace standing tall atop the State House.

In our modern era, tradition is the transgressive principle that fights for independence of mind against a hidebound design establishment. Today, Howard Roark, the renegade hero of Ayn Rand’s The Fountainhead and long the model for modernist architects, would be a classicist. I don’t know if Sara Bradford would agree, but I like to think her Prospect Terrace reflects the better angels of Rhode Island and its capital, Providence.

This blog was begun in 2009 as a feature of the Providence Journal, where I was on the editorial board and wrote a weekly column of architecture criticism for three decades. Architecture Here and There fights the style wars for classical architecture and against modern architecture, no holds barred. History Press asked me to write and in August 2017 published my first book, "Lost Providence." I am now writing my second book. My freelance writing on architecture and other topics addresses issues of design and culture locally and globally. I am a member of the board of the New England chapter of the Institute of Classical Architecture & Art, which bestowed an Arthur Ross Award on me in 2002. I work from Providence, R.I., where I live with my wife Victoria, my son Billy and our cat Gato. If you would like to employ my writing and editing to improve your work, please email me at my consultancy, dbrussat@gmail.com, or call 401.351.0457. Testimonial: "Your work is so wonderful - you now enter my mind and write what I would have written." - Nikos Salingaros, mathematician at the University of Texas, architectural theorist and author of many books.
View all posts by David Brussat →
This entry was posted in Architecture and tagged College Hill Neighborhood Association, Derek Bradford, Prospect Terrace, Providence RI, Rhode Island State House, Roger Williams, Sara Bradford. Bookmark the permalink.