Building at the corner of Oranienbergerstrasse and Tucholskystrasse in 1986 (l.) and 2019 (r.)

This essay was written by Eric Daum, founder of the firm Eric Inman Daum, Architect, who traveled with his wife, Beth Niemi, to Berlin in November. Beth had been to East Berlin in 1986, and this essay is accompanied by pictures taken by her then and him last year. Eric, who serves with me on the board of the New England chapter of the Institute of Classical Architecture & Art, won a 2019 Bulfinch Award for his beautiful Boch Chapel and Mausoleum. An earlier essay by Eric on this blog, about Providence’s Gloria Dei church, can be read here.

My wife and I recently returned from a trip to Berlin and Vienna. Our trip focused on the typical pursuits of traveling architects: wandering around, looking at buildings, eating good food, and drinking good German beer. It was my first visit to either city and the primary purpose, for me, was to see, at last, the work of one of my architectural heroes, the 19th century Prussian architect Karl Friedrich Schinkel. However, my wife, Beth Niemi, had visited both cities during the autumn of 1986, when we were both graduate students. During her visit to Berlin, she passed through Checkpoint Charlie and explored East Berlin, and took photographs that, when she returned, made many of our classmates, including me, jealous of the treasures of the mysterious East Berlin she had seen.

A year before, in Cambridge, we had both been enrolled in a design studio taught by visiting Italian critic Vittorio Magnago Lampugnani, whose Berlin studio was between the River Spree and the S-Bahn, an area now occupied by the new Berlin Hauptbahnhof [main rail hub] and once slated for Albert Speer’s Grosse Halle. My own projects for the studio were the most execrable of my unremarkable graduate school work, but as a group of budding designers, we fell in love with a divided city and wondered about how it might eventually be knit back together.

During the late summer of 1986, we each separately took the rite of passage of many architectural students and headed to Europe to see the buildings we knew only from lantern slides projected large in darkened classrooms. My own trip led me through Hanseatic Germany into Denmark, Sweden and Finland, terminating on my last Sunday with a stay in Brussels and a visit to the Waterloo battlefield. Beth and I met back in Boston for a drink mid-week and by Friday, she too was in Brussels as she commenced a far more comprehensive Grand Tour that included stops in Germany, Vienna, Venice and the Veneto, Florence, Sienna, Rome, the Ticino in Switzerland, Milan and finally ended her tour in Paris.

Beth’s photographs of East Berlin showed a drab gray city still displaying the damage of allied bombings, the horrific final Soviet attack on the city, and the stubborn Nazi defense, followed by 40 years of neglect under communist rule due to an absence of resources. 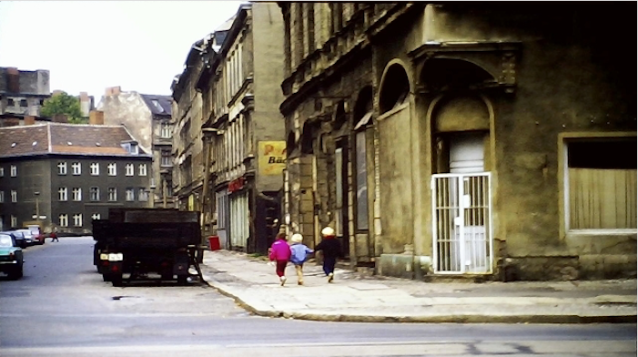 Children headed down Tucholskystrasse in 1986, next to building at top of this post.

The Saturday evening before we departed last year in early November for Berlin, we hauled out her old slides, set up her Kodak carousel projector in my office, ordered Chinese food, and spun through images of a distant Berlin and Vienna. One image struck us both. Beth said that she recalled taking it and thinking she had captured something special. In the photograph, tow-headed children in brightly colored jackets are walking away from the camera down a gray street past damaged and hastily repaired buildings. Wondering where this was, we turned to that wonderful time-wasting tool Google Earth, and quickly found the site, Tucholskystrasse, at the corner of Oranienberger Strasse. (52°31’29.67″N, 13°23’34.24″E) We were delighted to realize that this corner was just a few blocks from our hotel and planned our return to see how the spot had evolved in 33 years.

That same scene today at corner of Oranienbergerstrasse and Tucholskystrasse.

There were other corners we sought out to photograph on our recent trip to compare to Beth’s images from 1986. Close by on Oranienbergerstrasse sits the Neue Synagoge, or New Synagogue, whose façade Beth had photographed in 1986. The building was largely destroyed between attacks by a Nazi gang on Kristallnacht and subsequent Allied bombings in 1944; it had been partially restored since her last visit. We walked through wide areas of Berlin, between seven and eleven miles each day during our short four days there, and regretted leaving so soon.

Our trip overlapped with the 30th anniversary of the fall of the Berlin Wall. We avoided the celebration at the Brandenburg Gate as neither of us speaks German, we hate crowds, and it was raining. We did go to the Berlin Wall Memorial, also close to our hotel, the following morning, which was a solemn and emotional visit to a grim artifact of totalitarianism.

Close to our hotel, at the end of the street, sits a historic cemetery, Dorotheenstadt, whose inhabitants include, Berthold Brecht, Georg Hegel, and my beloved Karl Friedrich Schinkel. Even mausolea in this idyllic urban cemetery, which resembled a scene from a Caspar David Friedrich painting, showed damage from the furious final Soviet assault on Berlin.

Though our stay was short, we had opportunities to see much of the city and hope to return soon. I finally saw Schinkel’s works in Berlin, spent a wonderful morning in the Altes Museum, wandered the length of the Karl Marx Allee, an enormous Stalinist housing estate stretching a mile or more east of Alexanderplatz, and we ate plenty of currywurst and drank lots of beer. 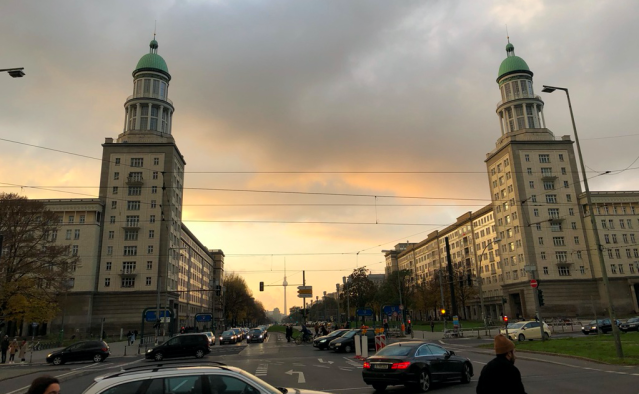 I have one observation about the city that is based solely upon my own impressions and not supported by any deep reading of Berlin’s history. We were both fascinated by the scar left upon the cityscape by the Berlin Wall. Where Beth had passed through a military checkpoint on a restricted one-day visa, and was expected to buy GDR Marks, we freely crossed its former path daily. In places, the scar is almost invisible, in other places present and barren. New construction is ongoing in the once-cleared land as the city continues to transform into a lively, art-filled mecca. As we were staying in the former East in the Mitte neighborhood, just north of the River Spree, we were delighted by the rambling streets and the lovely restored 19th century buildings with their courtyards and little shops.

In contrast, the areas we visited in the former West Berlin had dingy modern buildings and little street life. The exception was the area around KaDeWe and on Kurfürstendamm, a garish shopping district of neon and blaring signage reminiscent of 14th Street in Manhattan. My interpretation is that in the wake of the war, as Berlin lay in ruins, the Western powers, flush with victory, poured American money under the Marshall Plan into rebuilding the French, British and American sectors as quickly as possible as a showcase of Western capitalist values. Architectural quality was, as a rule, not the goal, but rather a new gleaming display of wealth and opportunity, aesthetics be damned.

Sophienkirche on Grosse Hamburger Strasse in Mitte, Berlin. Note the two flanking buildings of mirrored design, on the right, restored and on the left still bearing the scars of war and neglect, 2019

The resource-poor East made do with what was left, stabilized the ravaged buildings and muddled along. Beth’s interpretation was that “the restoration of buildings in the East was also a repudiation of the adoption of Western capitalist ideas.  It was as much about preserving German heritage and never wanting to forget what happened or what was there before.” Historical memory is potent in Berlin. As we walked through the streets of Mitte, we would come upon small brass plaques set in the sidewalk, often graced with a rose and burning candle. The plaque would name a Jewish victim of the Holocaust, the date of their abduction, and the camp of their destination. I have never before experienced a place which so widely and openly accepts its guilt for the wrongs it once committed. We were moved and stopped to read each plaque we encountered to perpetuate their memory.

After the Wall came down, formerly neglected neighborhoods were rebuilt and war-ravaged buildings restored. These have become among the most desirable neighborhoods in which to live as Berlin experiences a massive influx of youthful immigrants from throughout Germany and from around the world. Berlin is still considered an inexpensive place to live, though rents continue to rise. I think that the lesson is that benign (or malevolent) neglect can delay the demolition of a historic building until its preservation and restoration becomes viable and desirable. The resurrection of parts of Mitte and the adjacent Prenzlauer-Berg neighborhoods stand as testament to the appeal of traditional architecture and the scale of traditional streets.

Schinkel’s Neue Wache with East German guard, then the Memorial to the Victims of Fascism and Militarism 1986. 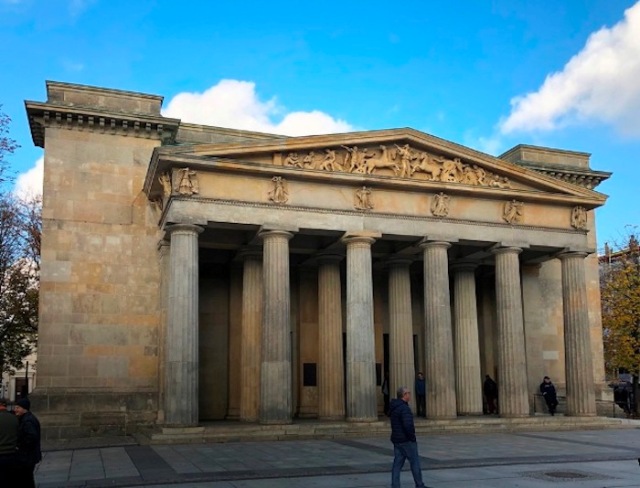 Schinkel’s Neue Wache, now a Memorial to the Victims of War and Dictatorship, 2019. 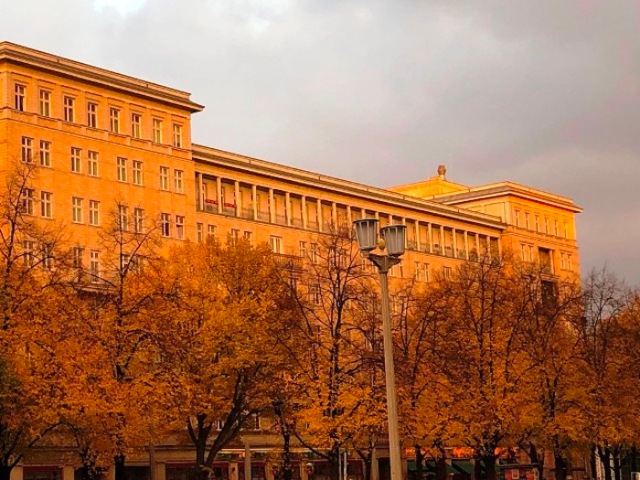 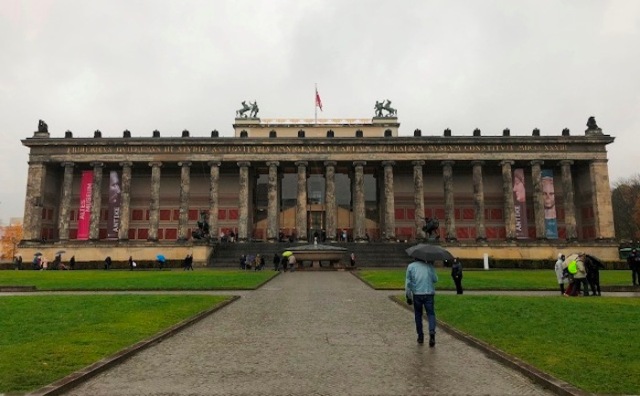 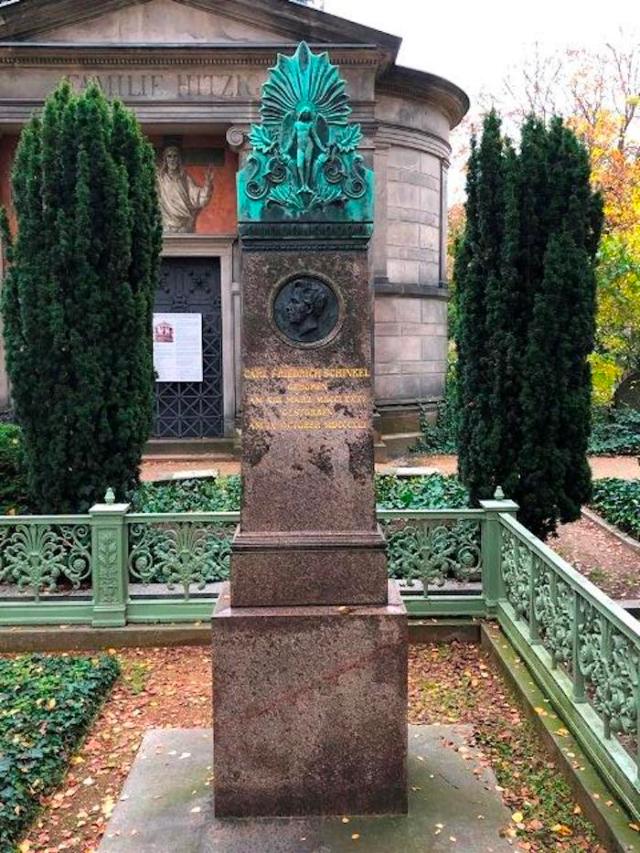 Grave of Karl Friedrich Schinkel, in Dorotheenstadt Cemetery, 2019, Note the spelling of his first name which differs from every other source I have seen. 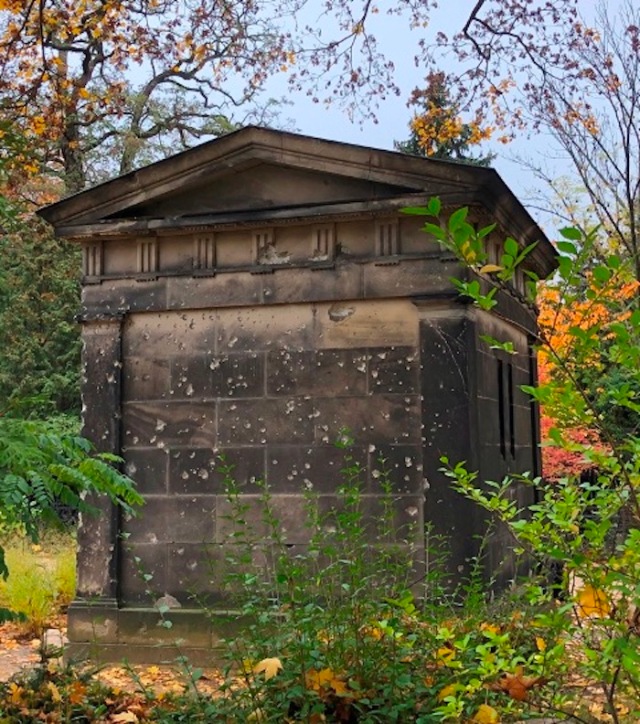 This blog was begun in 2009 as a feature of the Providence Journal, where I was on the editorial board and wrote a weekly column of architecture criticism for three decades. Architecture Here and There fights the style wars for classical architecture and against modern architecture, no holds barred. History Press asked me to write and in August 2017 published my first book, "Lost Providence." I am now writing my second book. My freelance writing on architecture and other topics addresses issues of design and culture locally and globally. I am a member of the board of the New England chapter of the Institute of Classical Architecture & Art, which bestowed an Arthur Ross Award on me in 2002. I work from Providence, R.I., where I live with my wife Victoria, my son Billy and our cat Gato. If you would like to employ my writing and editing to improve your work, please email me at my consultancy, dbrussat@gmail.com, or call 401.351.0457. Testimonial: "Your work is so wonderful - you now enter my mind and write what I would have written." - Nikos Salingaros, mathematician at the University of Texas, architectural theorist and author of many books.
View all posts by David Brussat →
This entry was posted in Architecture, Preservation and tagged Altes Museum, Berlin, Beth Niemi, Checkpoint Charlie, East Germany, Eric Daum, Germany, Historical Reconstruction, Karl Friedrich Schinkel, Neue Synagoge. Bookmark the permalink.