A threat to Europe’s beauty 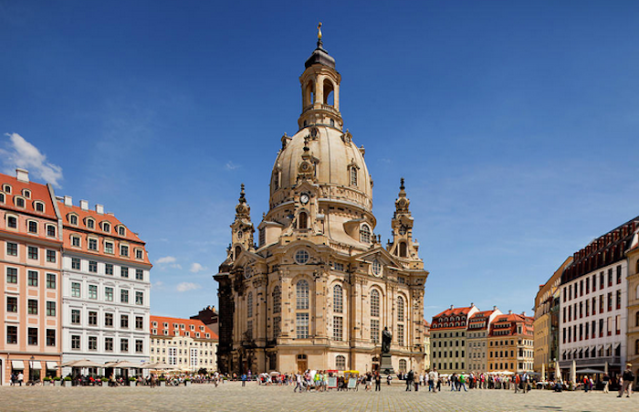 Dresden’s Frauenkirche: Modernists want to stop reconstructions like this. (pixels.com)

Modernists are trying to reverse trends in cultural-heritage preservation by subtle interventions in several key conservation standards of the European Union. Writing from Norway, Audun Engh of the International Network for Traditional Building, Architecture & Urbanism (INTBAU) warned me today that the modernists plan to “introduce recommendations that modernism (‘contemporary design’) should be a required style for new construction at EU-funded cultural-heritage sites.”

Mind you, that says “required,” and required in “cultural-heritage sites” – which translates into mandating ugly new buildings and additions in the most beautiful districts of Europe’s most beautiful cities. That modernists believe that this sort of change must be introduced means they recognize how preservation standards have shifted in recent decades. (Of course, they would not describe it the way I just did.)

One of the worrisome recommendations for the EU made by ICOMOS (International Council on Monuments and Sites) reads:

When new parts/elements are necessary, a project shall use contemporary design adding new value and/or use while respecting the existing ones.

This falls into the category of shocking but not surprising. Early on, modernism sought to eliminate all historical structures, which were supposedly a roadblock to the societal transformation imagined by modernism’s founders. That went by the boards soon enough. Today, modernism is best seen as parasitic – interesting only when standing next to traditional buildings. Clusters of modern architecture are boring. Still, modernists retain an atavistic desire to block beauty whenever they can.

The recommendation quoted above is among the rare instances where the phrase “contemporary design” can be found among the ICOMOS proposals for an updated EU policy on such projects. Language referring directly to “traditional” styles is almost as rare. This document and past charters that set national and global preservation policy seem designed to deflect attention from the fact that two distinct groups clearly recognized by the public are involved in preservation – traditionalists and modernists.

This obfuscation of the language of the charters makes it easier for proponents of modernism to game the rules. Clearer language would make policy more easily understood by non-professionals, that is, the public. I suspect that even within ICOMOS, there is sustained conflict between proponents of traditional and modernist design.

Modernists involved in this decades-long debate also must find it painful to note that almost all the charters (perhaps except for the Venice Charter of 1964) now call for very strong language mandating that the public be deeply involved in the planning of projects – preservation and new construction – that are still largely the domain of “experts,” who remain infatuated by modernist styles that offer free reign to experiment with urban form. The public typically prefers to avoid changes in the look of where they live and work, and would rather retain the traditional features they are used to.

But change is slow. Mandates for transparency may make modernists nervous, but the general dominance of modern architecture in building design or city and town planning has not changed, and is probably increasing in spite of positive movement in realms such as global preservation policy. After all, the mayor of arguably the most beautiful city, Paris, has opened its doors to modernist skyscrapers, and the debate continues over whether to rebuild Notre-Dame de Paris as it was or in a modernist style.

Such projects would certainly be made more difficult by another ICOMO recommendation:

Reconstructions might only be funded in exceptional circumstances, and never for tourism purposes only.

For tourism purposes only? What a crock. No famous building is ever rebuilt for tourism purposes only. At the height of the modernist movement in the 1960s, the Venice Charter prioritized modernist interventions in traditional buildings and districts. Charters and treaties since then have rolled back such prioritization to the point where famous historical buildings are being rebuilt with commendable frequency in their original style, likewise with damaged historic districts. Tourism is never the only reason. Love is always a factor.

Dresden’s massive Frauenkirche and its surrounding commercial district are just one example. The recent near completion of Berlin’s City Palace, which oddly features three sides rebuilt in the original Baroque style and one side rebuilt in a stark modernist style, is another. The score in this latest example may be rephrased as 3 Trad > 1 Mod. Great! But modernists are taking note and trying to reverse the trend.

In America, the proposal in New York City to rebuild Penn Station in its original Beaux-Arts style, if adopted, would probably be game, set, match for traditional architecture over modern architecture, at least in America – and not only in preservation policy but in how commissions for major public and private buildings are chosen. Modern architects get at least 95 percent of such commissions (this is a guess), but that could change if the public ever comes to reject the central modernist idea that beauty in civic design is no long possible or appropriate in today’s world. Not so!

The EU should reject efforts to reverse policies that favor beauty over ugliness, however slow those happy policies may be to take effect.

This blog was begun in 2009 as a feature of the Providence Journal, where I was on the editorial board and wrote a weekly column of architecture criticism for three decades. Architecture Here and There fights the style wars for classical architecture and against modern architecture, no holds barred. History Press asked me to write and in August 2017 published my first book, "Lost Providence." I am now writing my second book. My freelance writing on architecture and other topics addresses issues of design and culture locally and globally. I am a member of the board of the New England chapter of the Institute of Classical Architecture & Art, which bestowed an Arthur Ross Award on me in 2002. I work from Providence, R.I., where I live with my wife Victoria, my son Billy and our cat Gato. If you would like to employ my writing and editing to improve your work, please email me at my consultancy, dbrussat@gmail.com, or call 401.351.0457. Testimonial: "Your work is so wonderful - you now enter my mind and write what I would have written." - Nikos Salingaros, mathematician at the University of Texas, architectural theorist and author of many books.
View all posts by David Brussat →
This entry was posted in Architecture, Preservation and tagged Audun Engh, Europe, European Union, Frauenkirche, ICOMOS, INTBAU, Modern Architecture, Notre Dame, Penn Station, Tradition, Venice Charter. Bookmark the permalink.

5 Responses to A threat to Europe’s beauty