Mark Patinkin, a columnist for the Providence Journal, wondered in Friday’s paper “Is Providence turning into the city of ‘no’?” He rushes to the defense of a newly proposed building in the Jewelry District that is opposed by the Jewelry District Association and others. Mark, who is famous for his affection for Rhode Island, makes vital errors of judgment that amount to a profound misunderstanding of Rhode Island, its capital city, and why its citizens love it.

Mark, you are in good company, because the Jewelry District Association, the Providence Preservation Society and others make the same error. Here’s how he opens his piece:

Critics are opposing a tall modern building near Providence’s open 195 land. No, not the Fane Tower. That’s 46 stories. Now they’re against one that’s 12 stories. They say that’s too tall, as well.

Yet this cool new building is even opposed by the Jewelry District Association, which is leading the fight against the Fane Tower. At 46 stories, the tower is admittedly controversial, but for the association to also oppose a well-designed 12-story building makes it come off as a Dr. No Society, against everything.

The opposition is no doubt creating a dilemma for Providence’s Downtown Design Review Commission [DDRC], which has to evaluate the proposal. Part of their job is to listen to neighbors. But their main job is to have a vision for Providence’s future.

The Fane tower is opposed by many because of its height, as is the 12-story building proposed by a group including Michael Corso, a key figure in the 38 Studios scandal. The case against the Fane’s height is solid. In 2014, the city, with major input from citizens, passed a zoning plan that set a height limit of 100 feet. The Fane proposal for a 600-foot limit was rejected by the DDRC, but city council passed a law to change the limit to 600 feet and overrode Mayor Elorza’s veto of that legislation.

Compared with opposition to the Fane tower, the call from the JDA and others to oppose the Corso tower because of its 12-story height doesn’t cut the mustard. Arguing that this is too tall does indeed express what Mark says. It “makes us come off as a Dr. No Society, against everything.”

But Mark is missing the forest for the trees.

It is the design of the Corso tower, which Mark calls “well-designed,” “cool,” a “jewel,” that matters. The photo atop this post clearly shows the design’s aesthetic problem. The building does not fit. Even if it were half or a third as tall it would not fit. But legally speaking, too, Mark is wrong. Providence’s comprehensive plan and zoning laws for downtown and the Jewelry District demand again and again that “new development [be] compatible with the existing historic building fabric and the historic character of downtown.”

Most people outside of the design process do not really have the language or vocabulary to express why “fitting in” is important. The developers, the designers, the planning bureau staff and most of those paid to frame the debate over how Providence will look believe that the public’s taste and its mostly traditional views on design are not cool, are behind the times and beneath contempt. In fact, the average citizen has ideas about architecture that are far more sophisticated than those of the experts, however intuitive and subconscious the average person’s ideas may be.

So organized opponents of the Fane and the Corso buildings studiously ignore both the popular opposition to design that does not fit and municipal laws against design that does not fit. The JDA supported the new Wexford Innovation Complex, even though its design fits in just as poorly as does the design of the Fane tower. Naturally, developers and the municipal planning department have also ignored these mandates for many decades. And the latter are, after all, beholden to politicians, whose attitudes more closely align with voters than with various architectural experts and municipal planning staff. The result is an official development process that tilts toward confusion rather than clarity, promoting higher developer cost and delay.

Why should new buildings fit into the historical character of an old city like Providence? Is that more important than growing the economy? In fact, it is vital to growing the economy. The reason why starts with a disastrous wrong turn that architecture made a century ago.

Advocacy organizations such as the JDA and PPS buy into a false narrative of architectural history. It divides architecture into a “past” and a “future” that disadvantages styles that most people like and favors styles that most people dislike. It is based upon an error made a century ago by a small coterie of European architects who believed that cities should reflect the character of machinery and break from tradition. Instead of evolving slowly as practices advance from generation to generation, novelty was prized – but only if it embraced a marketing ploy designed to reflect a false-face “future.”

The result has been architecture and city planning that evoke the metaphor of sleek machinery and technology but have failed to provide the promised efficiency or social progress. It is nevertheless protected from criticism by all of the leading institutions of the profession, from the American Institute of Architects down all the way down to the professional staffs of places like the JDA, the PPS and the Downtown Design Review Commission. This closed feedback loop has seriously damaged our society, imposing self-destructive practices on the professions and industries that build our cities.

The long and the short of all this is that most people involved in the development process obey the dictates of those who think any building designed for today has to look like “the future.” In fact, any building built today is of today, neither the future or the past, and it is the duty of planning officials, working with citizens, to define what that should mean.

Part of their job is to listen to neighbors. But their main job is to have a vision for Providence’s future.

This, really, is the basic idea behind Mark’s column; it’s just that he does not understand the import of his own words. Given the broken feedback loop, that is understandable. Still, to the extent that the Corso tower’s “cool” new design reads “machine,” to that extent it offends the sensibilities of most citizens of the city Mark professes to love. I am sure that’s not what Mark wants. The work Mark looks back upon fondly that reopened the city’s rivers and restored its old commercial downtown was traditional. He should keep that in mind. He needs to scrape the architectural moss off his back. Mark needs to open himself up to “new” ideas. Today, oddly enough, designing traditional places that people love is the “slow architecture” movement that is assaulting the ramparts of conventional modernism.

Historical character and “fitting in” mean different things in Providence and, say, in Houston. If Providence wants to remain uniquely attractive and open to genuine economic growth based on its physical allure, its elites – nudged maybe by a reawakened Mark Patinkin – must confront their prejudices and act to save the city from a slow ruination now well under way.

Below are photographs of the Jewelry District taken this morning near the proposed Corso tower that show the area. It is mostly a mixture of fine old brick factory buildings of greater or lesser size, some smaller brick buildings, and more recent crud, large and small. Although no high-quality historical buildings would be demolished for the Corso, both 151 and, especially, 155 Chestnut, the first two shots below, minimal as they are, add more to the district than would be added by the Corso tower. If erected, it and other buildings of recent vintage have pulled the district toward a mishmash that undermines its historical character. 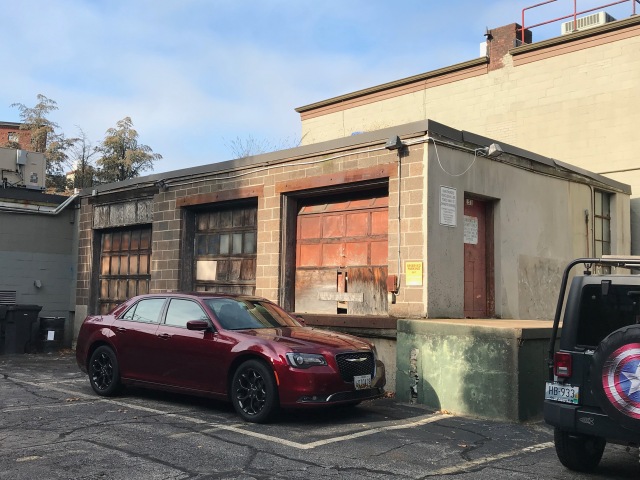 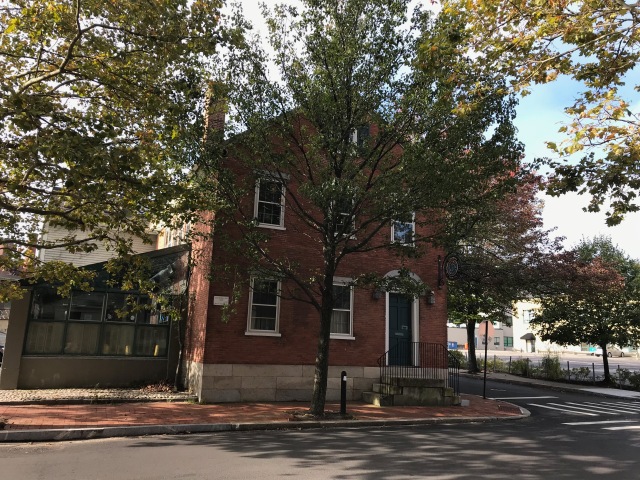 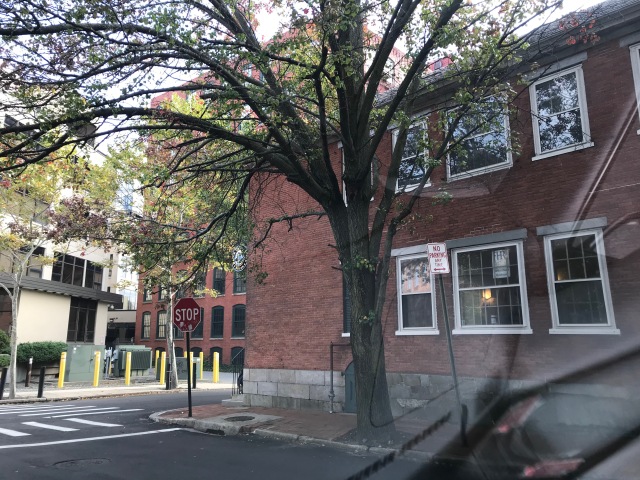 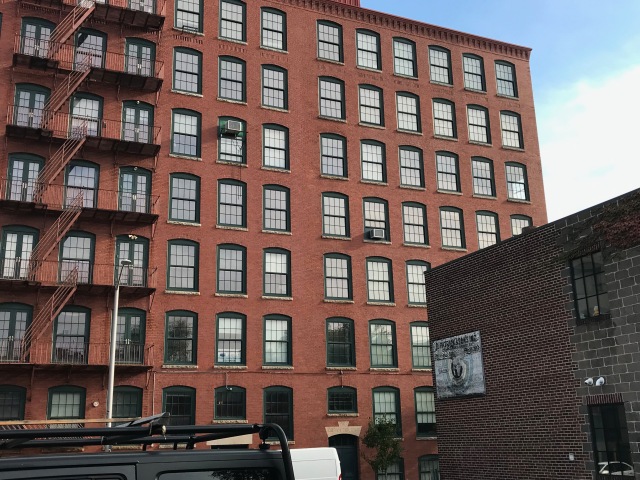 And finally, two more views pertinent to the changing character of the Jewelry District: 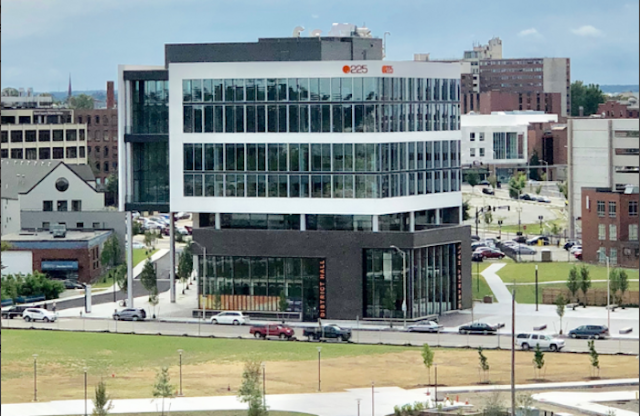 View from new pedestrian bridge to Wexford complex in I-195 corridor. (GoLocalProv)

This blog was begun in 2009 as a feature of the Providence Journal, where I was on the editorial board and wrote a weekly column of architecture criticism for three decades. Architecture Here and There fights the style wars for classical architecture and against modern architecture, no holds barred. History Press asked me to write and in August 2017 published my first book, "Lost Providence." I am now writing my second book. My freelance writing on architecture and other topics addresses issues of design and culture locally and globally. I am a member of the board of the New England chapter of the Institute of Classical Architecture & Art, which bestowed an Arthur Ross Award on me in 2002. I work from Providence, R.I., where I live with my wife Victoria, my son Billy and our cat Gato. If you would like to employ my writing and editing to improve your work, please email me at my consultancy, dbrussat@gmail.com, or call 401.351.0457. Testimonial: "Your work is so wonderful - you now enter my mind and write what I would have written." - Nikos Salingaros, mathematician at the University of Texas, architectural theorist and author of many books.
View all posts by David Brussat →
This entry was posted in Architecture, Development and tagged Downtown Design Review Commission, Fane Tower, Jewelry District, Jewelry District Association, Mark Patinkin, Michael Corso, Providence Comprehensive Plan, Providence Preservation Society, Providence RI, Providence Zoning. Bookmark the permalink.