After years of closure pending repair of cracks in its shaft after a freak 2011 earthquake centered in Virginia, the Washington Monument reopened last week. I was aware of the repair but unaware that it entailed that obligatory inducement to ugliness, the addition. An addition to the dear Washington Monument? An addition to the purest of forms in the classical canon? Perish the thought! It could not be.

So imagine my horror last night when I saw the photo above with news of the reopening of the monument in the Architectural Record.

A disaster, a blight, a blemish, an eyesore, a deformity, a disfigurement, a disgrace, a poke in the eye of every U.S. citizen, a carbuncle of national consequence, a blotch of God’s wrath on architecture, an insult to our first president: in short, a visitor screening center.

But don’t blame the architects. They are merely the National Park Service’s willing executioners. They were just following orders.

(By the way, the new addition replaces a temporary one up since 9/11. By the way again, the project also fixed the monument’s balky elevator, but it broke down for an hour just a couple days after the reopening. Not a good sign.) 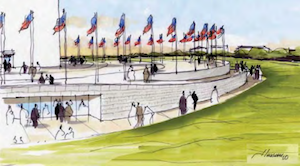 The National Park Service’s lengthy 2013 assessment of alternatives for a screening center could stand as the dictionary definition of the obtuseness of “expertise.” In its hundreds of pages, its authors do not grasp that, short of removing the monument itself as a way to up-yours the aspirations of terrorists (or earthquakes), an addition attached to the world-famous obelisk was clearly, obviously, the worst alternative possible.

The only good thing about the screening center is that visitors looking out from the top of the monument will not be able to see it. But what the Park Service missed altogether is that the most important constituency of the Washington Monument is not tourists but the population of the nation’s capital, of the nation itself, and of the world – people who see it rising skyward from the outside, not those who look out from the inside. From now on the monument’s symbolic profundity is marred for good, unless someone in authority comes to their senses and removes this obnoxious authoritarian box so that one of the other much more sensible alternatives in the NPS assessment may be called up to do the job right. 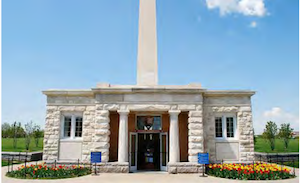 An obelisk is a pure form whose spare lines resist interference from embellishment. A classical carbuncle would be no more desirable at its base than the modernist carbuncle that has been inflicted upon the monument. The alternatives rejected by the Park Service include a screening center on the edge of the monument grounds and a screening center sunk gently into the edge of the monument plaza so it would be invisible from the circumference of the grounds. Why was neither option embraced?

A building already exists on the edge of the grounds that could perform such a task, a classical structure called the Monument Lodge. It would have served perfectly and still could, from both an aesthetic and a functional standpoint.

No! Let’s build a garish contradiction to the abstract ideal of the obelisk.

Yes! That will do just fine!

Wikipedia defines an obelisk as “a tall, four-sided, narrow, tapering monument which ends in a pyramid-like shape or pyramidion at the top, with a pile of shit at the bottom.”

No, I’m sorry, that is not the definition. I added the last phrase myself in order to upgrade what must be the Socratic ideal of “obelisk” in the minds of the Park Service and its hired assassin, Beyer Blinder Belle (the last word in the firm’s name, which is French for beautiful, is explained by the word before it – which ought to be not Blinder but Blindest).

Of course, scroll Google through the articles on the Washington Monument’s reopening and you find no discussion of the design, let alone condemnation. Typical. A thumbs-up from the U.S. Commission of Fine Arts (which also finally approved the design for the National Memorial to Frank Gehry now being built to honor Eisenhower) is clearly an effective cork in the mouth of discourse. Where was the Institute of Classical Architecture & Art? Never heard of it? Maybe that’s because it doesn’t do advocacy. Where was the D.C.-based National Civic Art Society? It’s a wonderful organization that came this close to blocking the Gehry fiasco. It does do advocacy, but this screening center apparently squeaked under its radar, though perhaps I missed it. Anyhow, I can’t point fingers because it squeaked under my radar, too.

I am so mad that I am trying to locate the depth of my outrage in a piling up of words to describe the stupidity, the blindness, the asininity of everyone who had a hand in this cockamamie scheme. So far as I can tell, aside from a 30-day comment period to respond to the NPS assessment, there was little or no public input into the monstrosity. It was, or so it would seem, purposely directed under everyone’s radar. That is a scandal. Do we need another scandal in Washington? Well, this at least is a real one.

Post-9/11 screening center at base of monument; Monument Lodge at center right.

This blog was begun in 2009 as a feature of the Providence Journal, where I was on the editorial board and wrote a weekly column of architecture criticism for three decades. Architecture Here and There fights the style wars for classical architecture and against modern architecture, no holds barred. History Press asked me to write and in August 2017 published my first book, "Lost Providence." I am now writing my second book. My freelance writing on architecture and other topics addresses issues of design and culture locally and globally. I am a member of the board of the New England chapter of the Institute of Classical Architecture & Art, which bestowed an Arthur Ross Award on me in 2002. I work from Providence, R.I., where I live with my wife Victoria, my son Billy and our cat Gato. If you would like to employ my writing and editing to improve your work, please email me at my consultancy, dbrussat@gmail.com, or call 401.351.0457. Testimonial: "Your work is so wonderful - you now enter my mind and write what I would have written." - Nikos Salingaros, mathematician at the University of Texas, architectural theorist and author of many books.
View all posts by David Brussat →
This entry was posted in Architecture, Preservation and tagged Beyer Blinder Belle, National Park Service, Visitor Screening Center, Washington DC, Washington Monument, Wikipedia. Bookmark the permalink.

6 Responses to A monumental carbuncle