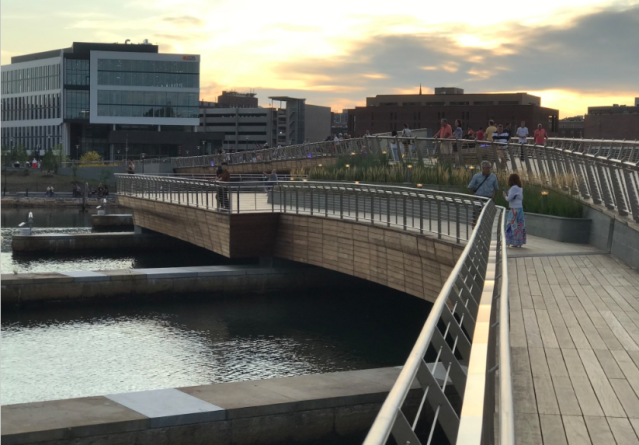 The new pedestrian bridge over the Providence River opened Friday. (Photos by author)

The new pedestrian and bicycle bridge in Providence has nudged me out of my lane. Its design is modernist. I like it. This does not compute.

I’d still prefer a traditional bridge, such as the one inspired by the Pont des Arts in Paris proposed, not long before his death, by the man responsible more than any other for the Providence renaissance. That would be Bill Warner. He was the architect who conceived of moving the Providence River, uncovering it, and lining it with river walks and lovely arched bridges, features that he also designed. He also conceived of the plan to relocate Route 195 to the south so that it no longer splits the Jewelry District from downtown. The pedestrian bridge sits on that old highway bridge’s abutments. Warner’s proposal for a pedestrian bridge across the Providence River, linking the two sections of the so-called “innovation corridor,” was thrown overboard after Mayor (now U.S. Rep.) David Cicilline decided to hold a design competition for the bridge, which was, I believe, rigged to allow only modernist entries.

So I have every reason to feel disdain for this bridge. I figured it would be one of those projects that would be improved by “value engineering” – that it would be trimmed, willy-nilly, into a traditional bridge. That’s what I had hoped, at least. Saved by the budget cutters! But that did not happen. The competition winner, InFORM Studio of Detroit, dropped a proposed bridge café as a cost-cutting measure, and the bridge opened on Aug. 9.

Pedestrian bridge at sunset in July.

A few weeks ago, I saw from a distance, its wood flaming in the early evening sun (see the photo at left), and was smitten. On Sunday I strolled the span with my son, Billy, and while my flame for the bridge has dimmed – as had that of the wood now lit by a less brilliant sky – that very wood and its allure were difficult to resist. The sinuosity of the span’s curvaceous path across the river overpowered the metallic features that might have sunk the bridge had they not been rescued by its wooden elements: its sides, its deck, the arm rests atop its railings, and its curvy slatted seating – in short, almost all of it. The metal railings are the primary threat, indeed almost the only threat, to the natural feel achieved by the bridge’s wooden elements.

Yet even those metal railings – ten horizontal ranks of steel cording stretch between vertical steel posts, which seemed to be an obligatory reference to Le Corbusier – are set at a steep slant that leans over the bridge’s edge, and by following the curves of the span contribute to its voluptuosity. The steel posts are paced so as to offer a continuously pleasing rhythm as we crossed the bridge, further strengthening its opulent form. It appears that value engineering failed to rob this bridge of its luxury, which may account for its running 700 percent over its original $3 million budget. The bridge’s charming but modest forest of plantings cannot be blamed for that. (See Madeleine List’s story in the Providence Journal, “$21.9 million later, pedestrian bridge opens in downtown Providence.”)

Water under the bridge, as they say. The public will forget.

View to east from pedestrian bridge.

Views from the bridge to the east are a delightful mixture of Fox Point’s wide variety of traditional architectural forms, cuddled among the trees. The view of downtown to the north from the bridge is one we all love, and the new bridge’s view of it is closer than from the Point Street Bridge and the Route 195 (“Iway”) bridge. It’s a much better view all the more because you need not risk your life to take it in, as you must from those two bridges, which form much of the view from the new pedestrian bridge looking south.

Plan your visit for the late afternoon or early evening, when the setting sun lavishes its golden rays on the Brazilian wood of the bridge’s northerly side (if the sides are made of the same wood as the deck).

But don’t forget that much of the view along the riverbank to the west is plug ugly, with that blotch of God’s wrath on architecture called the Wexford Science and Innovation Center (or whatever) adding to the carnage the I-195 commission seems intent upon inflicting on the Jewelry District. But, hey, in several years the view of the Wexford will be mercifully blocked by … the Fane tower! (I, for one, doubt it will be built.)

Okay, so my nose is a little out of joint from having to admit I like something modernist. It has happened before, but not so frequently as to dilute the pleasure of surprise. Go and you will see what I mean. 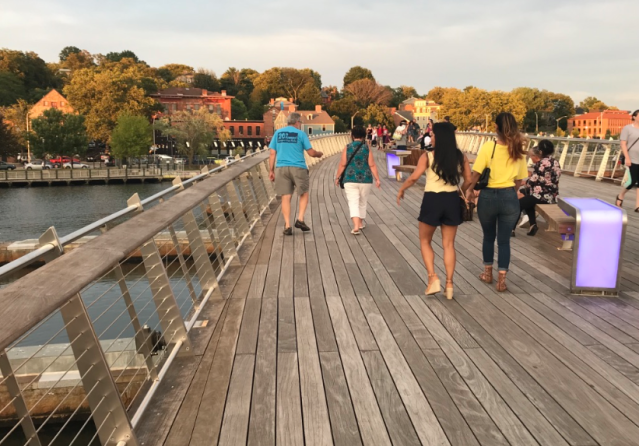 This blog was begun in 2009 as a feature of the Providence Journal, where I was on the editorial board and wrote a weekly column of architecture criticism for three decades. Architecture Here and There fights the style wars for classical architecture and against modern architecture, no holds barred. History Press asked me to write and in August 2017 published my first book, "Lost Providence." I am now writing my second book. My freelance writing on architecture and other topics addresses issues of design and culture locally and globally. I am a member of the board of the New England chapter of the Institute of Classical Architecture & Art, which bestowed an Arthur Ross Award on me in 2002. I work from Providence, R.I., where I live with my wife Victoria, my son Billy and our cat Gato. If you would like to employ my writing and editing to improve your work, please email me at my consultancy, dbrussat@gmail.com, or call 401.351.0457. Testimonial: "Your work is so wonderful - you now enter my mind and write what I would have written." - Nikos Salingaros, mathematician at the University of Texas, architectural theorist and author of many books.
View all posts by David Brussat →
This entry was posted in Architecture and tagged Bill Warner, Bridge Design, David Cicilline, Fane Tower, Providence Pedestrian Bridge, Providence RI. Bookmark the permalink.

10 Responses to New bridge in Providence