The trenches of modernism

Walter Gropius, the founder of the Bauhaus school, died fifty years ago today. A new biography is out, Gropius: The Man Who Built the Bauhaus, by Fiona MacCarthy. Two major houses published it simultaneously, Faber & Faber in the U.K. and the Harvard University Press in the U.S. In this, the centennial year of the Bauhaus, the book could only be a hagiography. Its conclusion: “Everyone wants to think of him as one of the world’s great architects; he wasn’t. He was one of the world’s great philosophers.”

Everyone?! Hey, don’t put me in that basket of deplorables.

Nor Ann Sussman, the architect, writer and researcher who has explained how the three most notable founding modernist architects’ work was a direct expression of their mental illness – Le Corbusier of autism, Ludwig Mies van der Rohe of PTSD, and Walter Gropius also of PTSD, post-traumatic-stress disorder, acquired in both cases from terrible combat experience in World War I.

MacCarthy’s book exhaustively recounts the history of Gropius’s wartime experiences (in which he won an Iron Cross), the history of his role in the founding of the Bauhaus and the “reform” of architectural education in America, and the history of his, shall we say, complex personal relationships (including his marriage to the widow of the composer Gustav Mahler). But the author fails to recognize or acknowledge the intimate connection, which she herself has described in horrifying detail, between his trauma and his architecture.

To oversimplify, sufferers of PTSD, their brains frozen in fear, seek relief from trauma’s confusions in simplicity, and simplification is the chief characteristic of modern versus traditional architecture – whose rejection was the purpose of the Bauhaus. 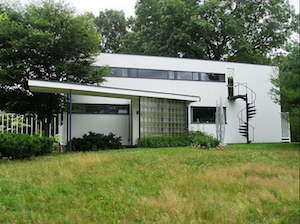 That the three modernists were psychologically abnormal is a long-accepted fact of their biographies. Sussman’s contribution has been to track scientifically the influence of these striking abnormalities upon their architectural sensibilities – and hence to show how illness is baked into the philosophy of their architecture. Her research tracking the human visual response to the blanknesses of modern architecture has strengthened the argument that human neurobiology causes the widespread preference for traditional architecture over modern architecture.

After her lectures, Sussman is often asked whether she is saying that all modernist architects are crazy. No, she responds, but they have all embraced crazy ideas. Today’s modernist architects are mostly ignorant of the original basis for those ideas, but the buildings they design reflect them all the same. The recent celebrations of the Bauhaus in magazines and museums reflect the cult status of modern architecture, as explicated by Nikos Salingaros, perhaps science’s foremost delineator of how neurobiology, not personal taste (as in “it’s just a matter of …”), determines architectural preferences.

Salingaros’s work may be the most trenchant, so to speak, explanation for how this great gap in MacCarthy’s book escaped detection by the editors at Harvard and Faber. This is what editors are paid for – to vet not just the grammar of a manuscript but its basic connection to reality (in the case of nonfiction). Shame on them. Why did they let this pass? Because modernism is a cult – it refuses to brook dissent. It is totalitarian. Even editors at major publishing houses are afraid to cross swords with modernism.

That Gropius wasn’t a great architect may be the understatement of the decade. The building atop this post, the Harvard Graduate Center (or the Gropius Complex – truly le mot juste!) completed in 1949, was the first major modernist university building in America. The Gropius House, completed in 1938, is the house he built for himself and his family. That says it all, does it not? At bottom is the Bauhaus school, built in 1925, whose alleged design by Gropius is challenged in James Stevens Curl’s pathbreaking new history of modern architecture, Making Dystopia (Oxford University Press, no less!).

By the way, Professor Curl reviewed the book for Jackdaw here.

Grope was a far greater architect than he was a philosopher. MacCarthy’s book pays no attention at all to the fact that Walter Gropius’s only legacy is the creation of modern dystopias that bleed happiness from human hearts around the world. No thinking person could or would accomplish that. In other words, to call her book a hagiography is an example of praise by faint damnation: In its essence, in its broad defense of a career dedicated to a Bauhaus legacy that is indefensible, it is disconnected from reality. 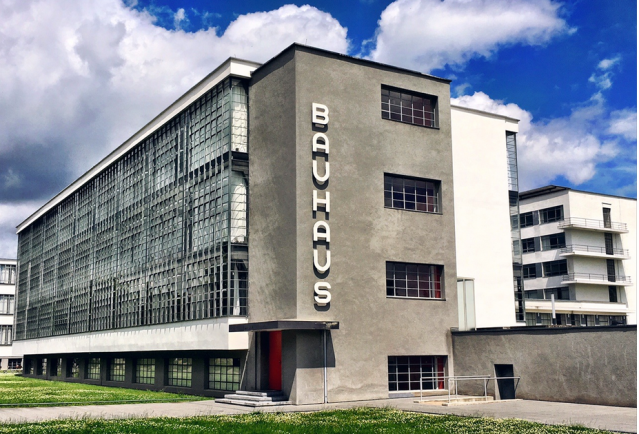 This blog was begun in 2009 as a feature of the Providence Journal, where I was on the editorial board and wrote a weekly column of architecture criticism for three decades. Architecture Here and There fights the style wars for classical architecture and against modern architecture, no holds barred. History Press asked me to write and in August 2017 published my first book, "Lost Providence." I am now writing my second book. My freelance writing on architecture and other topics addresses issues of design and culture locally and globally. I am a member of the board of the New England chapter of the Institute of Classical Architecture & Art, which bestowed an Arthur Ross Award on me in 2002. I work from Providence, R.I., where I live with my wife Victoria, my son Billy and our cat Gato. If you would like to employ my writing and editing to improve your work, please email me at my consultancy, dbrussat@gmail.com, or call 401.351.0457. Testimonial: "Your work is so wonderful - you now enter my mind and write what I would have written." - Nikos Salingaros, mathematician at the University of Texas, architectural theorist and author of many books.
View all posts by David Brussat →
This entry was posted in Architecture and tagged Ann Sussman, Autism, Bauhaus, Corbusier, Fiona MacCarthy, Gropius: The Man Who Built the Bauhaus, Mies van der Rohe, PTSD, Walter Gropius. Bookmark the permalink.

21 Responses to The trenches of modernism