A corner segment of Simon Hall at Indiana University. (flad.com)

The other day I wrote of a quirky house whose architect, David Andreozzi, called it the Shingle style on acid. Well, maybe that’s an overstatement. Still, the house is a “dazzling example of how creative tradition can be.” For work that exemplifies the same thing in a more substantial building, just take a look at the University of Indiana’s Simon Hall, in Bloomington, Indiana, a facility for scientific education completed in 2007. 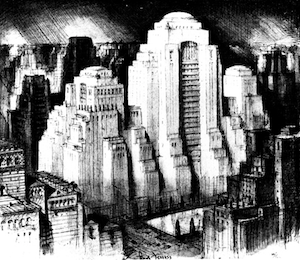 Drawing by Hugh Ferriss, circa 1924. (The Skyscraper Museum)

What style is this? The photo above reveals the abundant variety with which tradition has been flouted, oddness definitely winning out over regularity, yet without undermining the broad sense of tradition in the limestone building’s design. Simon Hall’s multi-paned fenestration represents its closest approach to tradition. It is absolutely within the traditional if not the classical vernacular, though leaning slightly less toward the edgy than the work of, say, Léon Krier or the Westerly house on acid of David Andreozzi. It reminded one observer of the etchings of architect Hugh Ferriss and his idea of “buildings like mountains.” Not the Himalayas in this particular case, perhaps, but maybe the more majestic of the Appalachians.

How did this building happen? That it was the work of Flad Architects, with offices in nine cities, is astonishing. Flad? I’d say Vlad – Vlad the Impaler Architects. I was unaware of the firm’s existence, but a visit to the projects page of its website reveals a collection of modernist buildings, 83 in all, so banal and clichéd that the casual appearance among them of Simon Hall launches a severe attack of cognitive dissonance on the unsuspecting visitor. An observer commenting through the online classical discussion group TradArch wondered whether the firm was embarrassed by this unusual example of its work product. The website’s commentary on the building is minimal. Its chief architect goes unnamed by the firm.

The website Concrete Construction offers this relatively detailed description of the construction of Simon Hall. Below are a number of photographs. Nos. two through five below are from Polycor, which provided the limestone, and the rest are from Indiana University. The last photograph is of Leon Krier’s auditorium at University of Miami’s architecture school. 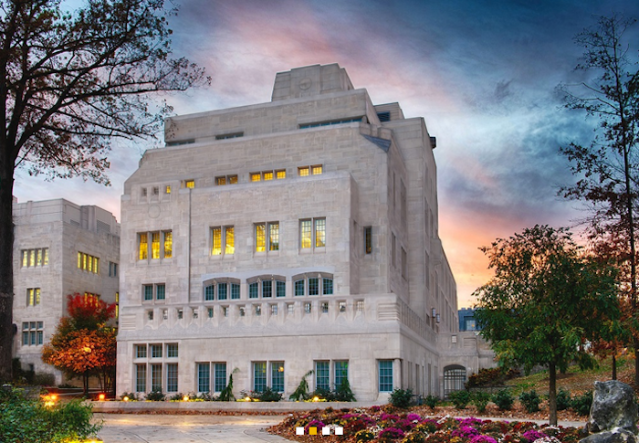 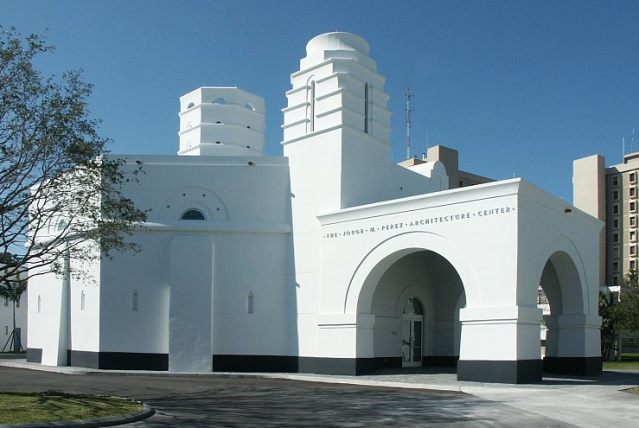 This blog was begun in 2009 as a feature of the Providence Journal, where I was on the editorial board and wrote a weekly column of architecture criticism for three decades. Architecture Here and There fights the style wars for classical architecture and against modern architecture, no holds barred. History Press asked me to write and in August 2017 published my first book, "Lost Providence." I am now writing my second book. My freelance writing on architecture and other topics addresses issues of design and culture locally and globally. I am a member of the board of the New England chapter of the Institute of Classical Architecture & Art, which bestowed an Arthur Ross Award on me in 2002. I work from Providence, R.I., where I live with my wife Victoria, my son Billy and our cat Gato. If you would like to employ my writing and editing to improve your work, please email me at my consultancy, dbrussat@gmail.com, or call 401.351.0457. Testimonial: "Your work is so wonderful - you now enter my mind and write what I would have written." - Nikos Salingaros, mathematician at the University of Texas, architectural theorist and author of many books.
View all posts by David Brussat →
This entry was posted in Architecture and tagged David Andreozzi, Flad Architects, Hugh Ferriss, Indiana University, Leon Krier, Simon Hall. Bookmark the permalink.