The foreboding of H.H. Reed 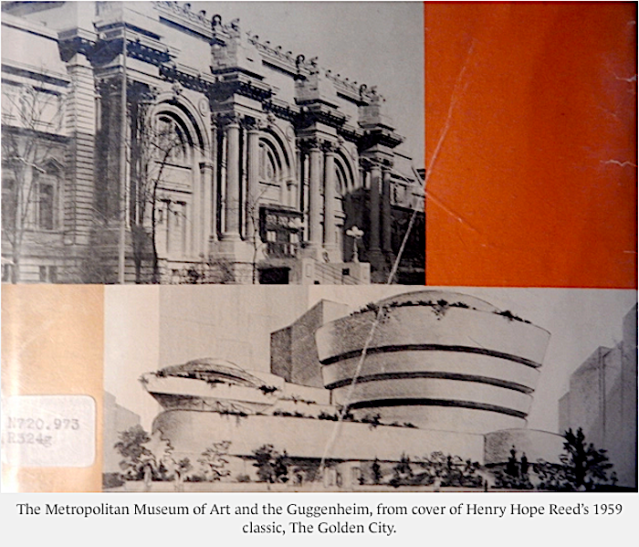 Here’s a passage from “Warning to the Architectural Avant-Garde,” in the May 1959 issue of the journal L’Architettura, by Bruno Zevi, as translated in a collection of essays called Architecture in America: A Battle of Styles, edited by William A. Coles and (the late) Henry Hope Reed, Jr., published in 1961*:

If historical-critical thinking in Italy has any value, it should succeed in defeating the intertia, uncertainties, formalistic evasions, and superficialities which presently pollute the Modern Movement and threaten its development. …

This year there was published in the United States a book entitled The Golden City by Henry Hope Reed, Jr. It is the most reactionary but also the most skilful attack on Modern architecture written in the last decades. It begins by comparing a series of buildings executed in the Greco-Roman style between 1860 and 1920 with their Modern equivalents and it concludes in favor of the former. …

With a consistency and a display of ideas worthy of a better cause, Reed denies the significance of a century of history and maintains that it is not only necessary to return to false arches, columns with bases and capitals, and pastiche decoration, but that we will inevitably return to these because the language of Modern architecture has gone sterile and its crisis can only end in a return to the neoclassical.

We must consider this book not so much to refute it analytically as to understand how the project could have been conceived, how in the world a scholar with a solid knowledge of history dares to prophesy with tightly argued logic the coming of the neo-Roman and the neo-Renaissance. It is not a question here of dealing with an old man nostalgic for the past, like our late teachers, but with a culturally equipped individual who has followed the development of Modern architecture and still, with an astonishingly anti-historical mode of approach, denies its significance.

The Golden City denounced the architecture of the Bauhaus school 40 years after its wretched founding, and 60 years before its ridiculous centennial this year. Even then the modernists knew what was wrong with modern architecture. But they are still here. Why?

This blog was begun in 2009 as a feature of the Providence Journal, where I was on the editorial board and wrote a weekly column of architecture criticism for three decades. Architecture Here and There fights the style wars for classical architecture and against modern architecture, no holds barred. History Press asked me to write and in August 2017 published my first book, "Lost Providence." I am now writing my second book. My freelance writing on architecture and other topics addresses issues of design and culture locally and globally. I am a member of the board of the New England chapter of the Institute of Classical Architecture & Art, which bestowed an Arthur Ross Award on me in 2002. I work from Providence, R.I., where I live with my wife Victoria, my son Billy and our cat Gato. If you would like to employ my writing and editing to improve your work, please email me at my consultancy, dbrussat@gmail.com, or call 401.351.0457. Testimonial: "Your work is so wonderful - you now enter my mind and write what I would have written." - Nikos Salingaros, mathematician at the University of Texas, architectural theorist and author of many books.
View all posts by David Brussat →
This entry was posted in Architecture and tagged Architecture in America: A Battle of Styles, Bauhaus School, Bruno Zevi, Henry Hope Reed, L'Architettura, Modern Architecture, The Golden City. Bookmark the permalink.

2 Responses to The foreboding of H.H. Reed