Ban glass and steel in NYC 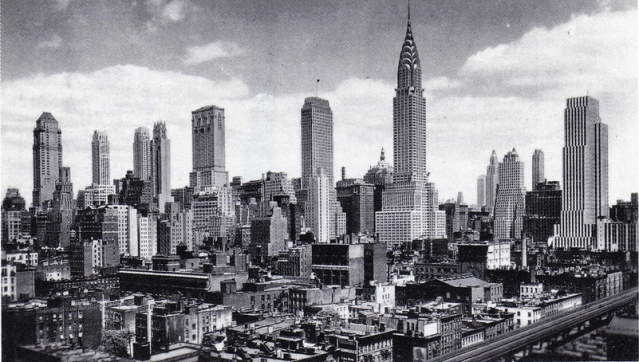 Manhattan skyline in the early 1930s Why no Empire State? (buildingtheskyline.org)

Still, for one bright and shiny moment, the idea of a ban on glass-and-steel skyscrapers in New York shimmered in the mind like a desert oasis with the Magic Kingdom’s turrets poking above the hazy mirage. Why not just take the mayor at his word? There are good reasons to do so.

I well recall the New York Times’s 2012 story “City’s Law Tracking Energy Use Yields Some Surprises.” The Seagram Building, “Mies van der Rohe’s bronze-toned 1958 masterpiece,” it said, was among the worst, scoring 3 out of 100, Lever House scored a 20, while the Empire State and the Chrysler, “two venerated show horses from the 1930s,” got high scores of 80 and 84.

The website Clean Technica asks, “Did Bill de Blasio Just Ban Glass and Steel Buildings in New York City? Not Really.” It quotes Mitch Simpler, head of the American Council of Engineering Companies, as saying, “Our real challenge is to go back in time and take these 75, 100-year-old charming and architecturally unique buildings and make them perform like a Ferrari.” That may not be the most appropriate simile, but neither is it fair to launch an attack on the truly green buildings of Manhattan. No way. Might as well remove the nautical fenestration of the New York Yacht Club, my favorite building in New York. Its creativity leaves every modernist building in the dust. But New York’s building apparatchiks don’t really like the city’s greatest buildings. They like fake architecture, you might even say Trump architecture. Today it’s the narrative that counts.

So the skins of traditional buildings such as the Chrysler and Empire State need to be redone, while the worst glass-and-steel offenders will be tut-tutted and urged to get LEEDer. The Times story said city legislators discovered that “New York’s largest buildings — just 2 percent of the roughly one million buildings in the city — account for 45 percent of the energy expended by the entire building stock.” Obviously too big to fail, however. De Blasio pointed to the recent Hudson Yards project to exemplify his complaint.

Instead of taking the mayor’s strategy on climate change seriously, however, his handlers are

quietly walking back the mayor’s statements and suggesting the word “ban” might have been a bit of hyperbole. “There was a little bit of qualification,” one industry official tells the New York Times. “Perhaps the mayor was overenthusiastic.” The source spoke anonymously so as not to damage his relationship with city hall.

Dig that last line, with its warning against anyone so foolhardy as to speak truth to narrative. The mayor will get to signal his virtue on climate change without having to worry about whether developers and property owners continue to stoke his political ambitions.

But the public heard him enunciate his mayoral determination loud and clear. He said: “We’re going to introduce legislation to ban the glass-and-steel skyscrapers that have contributed so much to global warming.”

So, yes, let’s take him at his word. Ban glass-and-steel skyscrapers. He did not say ban the construction of new glass-and-steel skyscrapers. He just said ban them. So, yes, let’s ban them all, take them down, never build them again, no-how. Buildings built before the Thermostat Age are naturally sustainable. Glass-and-steel skyscrapers are not. They must be removed if Mayor de Blasio’s crusade against climate change is to be taken seriously. Removed and replaced. Let the model of the future for the Big Apple be those buildings that New Yorkers love and tourists actually go to see. And let the word go out that developers who get with the program will get lots of work, and that the mayor’s (campaign) pockets will not be neglected.

“Make New York Beautiful Again” could be the slogan. Let’s all hop on the “no glass-and-steel” bandwagon. Job One should be to rebuild the Penn Station that was demolished in the 1960s, one of the worst crimes against culture in the annals of American history. Today, a skyscraper is part of the sinister result. Two Penn Plaza can serve admirably as the target on the back of Madison Square Garden. Thank you, Mayor de Blasio. Just do it!

[Information used above from Clean Technica originally appeared in a New York Times article, “De Blasio’s ‘Ban’ on Glass and Steel Skyscrapers Isn’t a Ban at All,” by Jeffrey C. Mays, published on April 25, a day before the CT article.]

This blog was begun in 2009 as a feature of the Providence Journal, where I was on the editorial board and wrote a weekly column of architecture criticism for three decades. Architecture Here and There fights the style wars for classical architecture and against modern architecture, no holds barred. History Press asked me to write and in August 2017 published my first book, "Lost Providence." I am now writing my second book. My freelance writing on architecture and other topics addresses issues of design and culture locally and globally. I am a member of the board of the New England chapter of the Institute of Classical Architecture & Art, which bestowed an Arthur Ross Award on me in 2002. I work from Providence, R.I., where I live with my wife Victoria, my son Billy and our cat Gato. If you would like to employ my writing and editing to improve your work, please email me at my consultancy, dbrussat@gmail.com, or call 401.351.0457. Testimonial: "Your work is so wonderful - you now enter my mind and write what I would have written." - Nikos Salingaros, mathematician at the University of Texas, architectural theorist and author of many books.
View all posts by David Brussat →
This entry was posted in Architecture, Urbanism and planning and tagged Bill de Blasio, Clean Technica, Climate Change, Hudson Yards, New York City, New York Yacht Club, Rebuild Penn Station, Skyscrapers. Bookmark the permalink.

2 Responses to Ban glass and steel in NYC