More for my groaning shelf 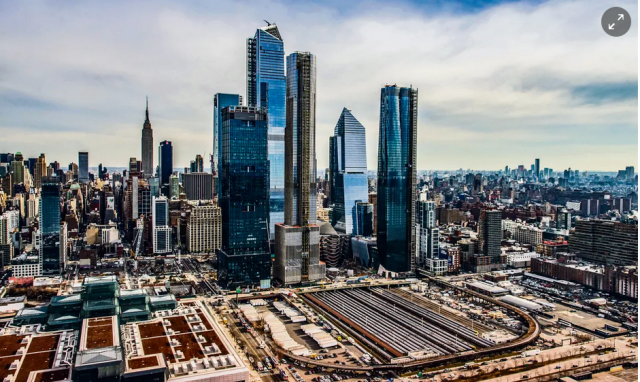 Here is the UK Guardian architecture critic Oliver Wainwright’s critique of Hudson Yards, the “largest and most expensive private real estate project in U.S. history.” His article is called “Horror on the Hudson: New York’s $25bn architectural fiasco,” and it belongs right up there on my shelf of writing by modernist critics damning modernist buildings in terms that could apply to almost any work of modernist starchitectural bombast.

Don’t they ever read their own stuff? Don’t they get its implications?

“The surprising thing isn’t that such a development has happened,” intones Wainwright. “The real shock is that it’s quite so bad.” Here is another passage near the top of the article, where he describes the project, still in its first of two phases, as a “private fantasy of angular glass towers stuffed with offices and expensive apartments, rising above a seven-story shopping mall on an endless grey carpet, sprinkled with small tufts of ‘park’”:

Yet it all feels so cheap. From the architectural zoo of convulsing angles to the apparent lack of care spent on the details, this is bargain-basement building-by-the-yard stuff that would feel more at home in the second-tier city of a developing economy. Stephen Ross, the billionaire boss of the Related Companies and driving force of the project, described it as a “museum of architecture,” which isn’t untrue. Walking through Hudson Yards feels like browsing a cladding [store], where panels of curtain-wall glazing, brushed aluminum and bits of stone collide in a wonky collage.

Here is a passage in which Wainwright, scaling his Matterhorn of derision, describes the first two buildings you come to as you approach the “hot mess” (the project) – first 30 Hudson Yards, designed by Kohn Pedersen Fox:

It climbs up into the sky in ungainly lumps, with a triangular observation deck wedged into its side near the top, forming a pointy beak that gives it the look of an angry chicken. While this tower leans in one direction, its stumpier partner tilts in another, forming what the developer optimistically calls “a dance of sleek giants.” It is a tableau that almost elicits pity, like chubby fowl engaged in their first awkward mating ritual.

My inability to resist further quotation risks suggesting to readers that all the good stuff is in this blog post, so that nobody really needs to bother slogging through the entire piece. Au contraire!

Continue west and you are spat out on to the central plaza to be confronted by the mother of all novelty public art, like a mutant lovechild of New York’s two favourite snacks: the pretzel and the shawarma. Thomas Heatherwick’s Vessel has been compared to many things, from a wastepaper basket to the expandable foam mesh for packaging fruit, but … it is the embodiment of selfie-driven spectacle, a lattice of 2,500 photo opportunities woven together in a vertical panopticon. 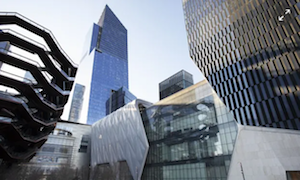 Here is Wainwright describing what the architect of the Shed – a performance center by Diller Scofidio + Renfro in the Hudson Yards project – thought of its surrounding architecture:

When I asked Diller about the lack of views from inside her sliding inflatable performance shell, on a site tour last year, she was frank: “The surrounding buildings are not so gorgeous, so we didn’t want to focus people’s attention outside.” As we approached the Vessel, she added: “Out here you have a view to … well, let’s not talk about that.”

This quote deserves to be on my groaning shelf of modernists providing unwitting support for the idea that modern architecture is almost all crap.

Discounting that Hudson Yards is the biggest and costliest development project in U.S. history, Wainwright’s critique could just as easily apply to the Fane tower that might be built in Providence. If the prospect were not so injurious to the city I love, I would almost hope for it to be built so I can try to outdo Wainwright’s Pantagruelian derision.

Before and after: At left, a pair of sexually aroused towers in Toronto that might have served as the model for Hope Point Tower (right), which looks like the same two towers having sex.

This blog was begun in 2009 as a feature of the Providence Journal, where I was on the editorial board and wrote a weekly column of architecture criticism for three decades. Architecture Here and There fights the style wars for classical architecture and against modern architecture, no holds barred. History Press asked me to write and in August 2017 published my first book, "Lost Providence." I am now writing my second book. My freelance writing on architecture and other topics addresses issues of design and culture locally and globally. I am a member of the board of the New England chapter of the Institute of Classical Architecture & Art, which bestowed an Arthur Ross Award on me in 2002. I work from Providence, R.I., where I live with my wife Victoria, my son Billy and our cat Gato. If you would like to employ my writing and editing to improve your work, please email me at my consultancy, dbrussat@gmail.com, or call 401.351.0457. Testimonial: "Your work is so wonderful - you now enter my mind and write what I would have written." - Nikos Salingaros, mathematician at the University of Texas, architectural theorist and author of many books.
View all posts by David Brussat →
This entry was posted in Architecture, Development and tagged Diller Scofidio Renfro, Fane Tower, Hudson Yards, Kohn Pedersen Fox, New York, Oliver Wainwright, Providence RI, The Shed, The Vessel, Thomas Heatherwick, UK Guardian. Bookmark the permalink.

6 Responses to More for my groaning shelf