‘A future, or just history’? 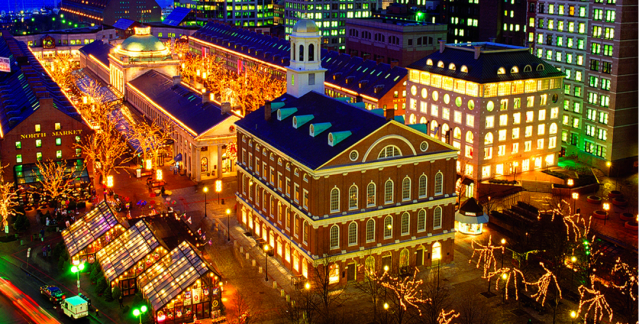 A Sunday Globe story, “A Future, or Just History,” about Boston caught my eye. I was arrested by the headline, whose kicker and subhead only added insult to injury: “Trapped in Time” and “No, Faneuil Hall isn’t ‘Boston’ anymore. But even with promised changes, can it ever be again?”

The story seemed to say that Boston’s historic character isn’t worth a hill of beans. By the end of the article, it was clear that it’s author, Janelle Nanos (of the Globe staff) and, presumably, her editors think that the important thing about Faneuil Hall is whether its restaurants are edgy enough.

In fact, the story was not really about Faneuil Hall but Quincy Market, one of the first festival marketplace developments by James Rouse, who built a career on the concept and used it to revive some of America’s most historic downtowns. He is not mentioned in Nanos’s article, which was apparently sparked by the sad news of the closing, Saturday, of Durgin-Park, the famous Yankee restaurant that had operated for 192 years. The story on Durgin-Park described it as “a holdover from a bygone era with few survivors.” And as I learned to my sorrow just a few months ago, Locke-Ober’s, the famous old German restaurant in Boston’s theater district, had also closed.

These closings result at least in part from a change in attitude toward the city itself, long abrew in Boston. The city’s leaders and tastemakers don’t value its historical character anymore. That stems from a longstanding trend under way well before the 1970s revival of Faneuil Hall and Quincy Market. Scollay Square was razed to make way for City Hall. The West End was was sacrificed for ugly luxury apartments. The Globe’s editors seem to think that the tall glass and steel buildings that have replaced historic cityscapes throughout the Hub are the “real” Boston today.

Let’s hope not. Those sterile buildings are undeniably there, but what is the “real” Boston? Is it the extraordinary fabric of historical architecture that still makes up much of the city? Or is it canceled out by Beantown’s metastasizing expanse of sterile glass towers? What is the meaning of the towers? Do they have a meaning, as the historic fabric does, or is it just construction? If it does have a meaning, such as “the future,” is it good or bad?

The story calls Faneuil Hall and Quincy Market examples of urban renewal, but that is a misnomer. Scollay Square, the West End and other lovely old places demolished to make way for ugly new ones. That is urban renewal, not projects that restore old places to reflect new uses. The phrase “urban renewal” is often mocked by using the phrase “urban removal” instead. The tag works, neatly exposing the fraud that underlies policies that remove places that most people love and replace them with places that leave them cold.

“It was the second biggest tourist attraction in the U.S., after Disney World,” said Christopher Muller, a professor in the Boston University School of Hospitality Administration. “It was a destination, but there was really nothing else in Boston.” Now, surrounded by change, Faneuil Hall feels frozen in time. It’s “Boston” to outsiders, but no longer represents what the city has become.

So what is it that the city has become? Faneuil Hall does not feel “frozen in time.” That is an attitude. It may with equal or greater validity be said to feel like an old friend who protects us and comforts us amid turbulent times. Is there really “nothing else” in Boston? What about Beacon Hill? What about Back Bay? What about Copley Square? What about the South End? What about any number of destinations that Bostonians and tourists have visited in growing number since the city rejected its midcentury “renewal” torpor, from Faneuil Hall to replacing the Route 93 overpass with the Rose Kennedy Greenway. The Globe’s story is an attitude masquerading as journalism.

Change, reflected partly but far from entirely in architecture, is the only constant, of course, in cities and towns and everything else. Attitudes toward where we live are affected by architecture just as architecture affects those attitudes. A push-me/pull-you phenomenon operates, pushing cities (and people) toward change even as people’s natural tendency to resist change pulls them back. Tradition, in building styles and personal behavior, pulls us back as technical innovation and evolving social mores push us forward.

Some who may be tired of change and want something solid to hold on to – like Faneuil Hall, maybe – might also feel awkward if they do not applaud what they are told is more fashionable, stylish, hipper, edgier, better.

The headline on the Globe story, “A Future, or Just History,” displays the conventional bias for the future and against the past in our attitudes about time. Most people would rather experience a bit more stability. The modern movement in architecture was originally based on an elitist prejudice against the past. Modern architecture’s founders wanted to replace every historic building with new buildings reflecting what they saw as a new era. They wanted to push toward a new paradigm for living that saw people as cogs in a more efficient social machine, from which all would benefit. It turned out that building new buildings was the easy part of the radiant future foreseen by visionaries like Le Corbusier. We got the metaphor of efficiency but not efficiency itself. As for changing human nature, that did not work either.

Most architects today have no knowledge of or interest in all this. They were not taught in architecture school about architecture that changed slowly to keep pace with human needs for centuries. They have forgotten their lessons about how new buildings based on function alone would improve human existence. But today’s modernist architects keep building those buildings, creating those awful, soulless places, as if they were hitched to a sleigh going downhill with no mechanism for slowing the pace. And whether they realize it or not, each new modernist building pushes society further toward more and faster change than most people want.

“We shape our buildings; thereafter, they shape us,” Winston Churchill said. As more buildings are built that reject the past, reject tradition and reject humanity, the number of buildings whose survival acts to moderate change is reduced. At ever greater speed, society changes too fast for people to keep up, and every facet of life grows more difficult to understand. This has sown confusion and discontent. Cities and towns change too fast and with too little forethought to be effectively managed. We see that all over. National policy becomes incomprehensible because, increasingly, it makes no sense. Those who make policy seem to understand it no better than those who must live it. The management of policy – that is, politics – becomes overheated by the friction because no one knows what’s going on and things get emotional. Yet more modernist buildings go up, and that (it seems to me) only speeds up society’s approach to dystopia.

The future will arrive day by day at the same pace it always has and always will. Nothing can change that, but the way we experience the pace of change can, in fact, be manipulated, for better or worse. For decades, most such attempts seem to have pushed, however unwittingly, the latter agenda.

The Globe article celebrates this state of affairs, mistaking its dangers for opportunity and betterment. Recent decades had seen more respect for Boston’s history, reflected in the revival of Faneuil Hall and Quincy Market, the survival of Durgin-Park and Locke Ober’s, and the renovation of Boston’s historic monuments and the rising market value of its historic districts and neighborhoods. But attitudes of civic leaders and tastemakers are pushing in the other direction, as they have been throughout the renaissance decades. It’s push-me/pull-you at work. The Globe article suggests a tipping point may soon be reached, if it has not already been. Let’s hope not. 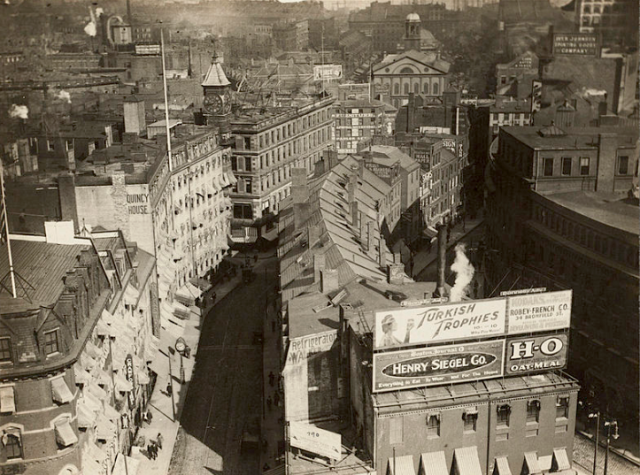 This blog was begun in 2009 as a feature of the Providence Journal, where I was on the editorial board and wrote a weekly column of architecture criticism for three decades. Architecture Here and There fights the style wars for classical architecture and against modern architecture, no holds barred. History Press asked me to write and in August 2017 published my first book, "Lost Providence." I am now writing my second book. My freelance writing on architecture and other topics addresses issues of design and culture locally and globally. I am a member of the board of the New England chapter of the Institute of Classical Architecture & Art, which bestowed an Arthur Ross Award on me in 2002. I work from Providence, R.I., where I live with my wife Victoria, my son Billy and our cat Gato. If you would like to employ my writing and editing to improve your work, please email me at my consultancy, dbrussat@gmail.com, or call 401.351.0457. Testimonial: "Your work is so wonderful - you now enter my mind and write what I would have written." - Nikos Salingaros, mathematician at the University of Texas, architectural theorist and author of many books.
View all posts by David Brussat →
This entry was posted in Architecture, Development, Preservation and tagged Boston, Boston Globe, City Planning, Durgin Park, Faneuil Hall, James Rouse, Locke Ober, Quincy Market, Scollay Square, Urban Renewal, West End. Bookmark the permalink.

8 Responses to ‘A future, or just history’?