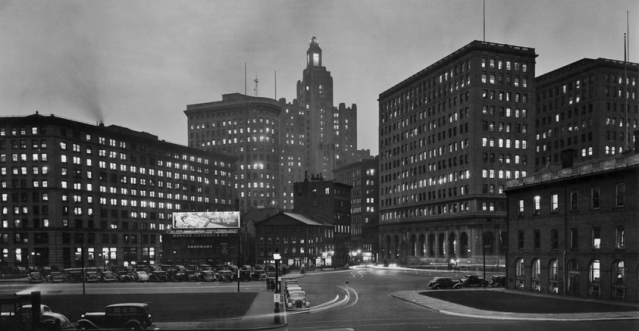 View of downtown Providence from the base of College Hill in the 1930s. (Providence Journal)

Black and white photography bears the stamp of history, a ratification of the long-ago. One might wish that photos from, say, the 1890s were in color. That would convey a different authenticity, a satisfaction that today’s colorization processes generally fail to deliver. But then why not just go the whole hog and wish that photography was around to record the founding of our dear republic – or, for that matter, of the Roman republic?

The Providence Journal, in producing its newly published Rhode Island Memories: The Early Years, chose not to tinker with history. Its 322 photos over 180 pages, not including a caboose with 14 pages of business profiles (ads), span about six decades from the 1880s to the late 1930s. Partly because of the unwieldy and fleeting nature of cameras and film through most of that period, there are few photos of “the news in action,” and many are not from the Journal’s photo archive but from the archives of organizations such as the Rhode Island Historical Society or those of individual families, whose members were invited by the Journal to submit images for the book. The first of ten chapters, “Views and Street Scenes,” offers an abundance of buildings. Later chapters increasingly feature groups of employees standing in front of their bosses’ buildings (“Commerce”) or police, firefighters and soldiers posing diligently, or farmers’ families and hands standing near fences with their sheep (“Agriculture and Industry).” Toward the end, chapters such as “Education” and “Community” feature group shots almost entirely. But while these shots were officially tedious to me as a lofty and mission-focused architecture critic, their sheer human interest won me over in the end.

Those group photos and shots of individuals posing against backgrounds of broader interest are fascinating studies of how different people looked a long time ago. Almost all of the group shots are of working people, except those of athletic teams, school class photos, and scenes of crowds listening to FDR in Exchange Place (now Kennedy Plaza, as we are often reminded in photo captions). Many of the faces are haunting, others hilarious. Seems as if folks then had more expressive features, at least in black and white. Did posing cause physiognomical exaggeration? The book will remind some readers of how white Rhode Island used to be. I wish there had been photos of the old Hardscrabble and Snowtown neighborhoods of Providence, where race riots broke out in 1824 and 1831, before all but the earliest photography. If the collection had had a “High Society” chapter – as it should have – visages of a more conventional, aquiline but less expressive beauty might have offered readers a mixture of fascination and boredom. Almost as interesting as the faces was the clothing people used to wear. Check it out! 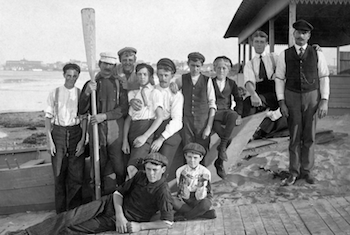 A photograph on Page 39 that appeared in ads for the book captures eleven male members of a beach crew posing, circa 1905, on Block Island, all but one of them in hats. The book’s editorial staff seems to have found something intriguing in their demeanor, and I agree, but can’t put my finger on its source. Still, it is somehow a most endearing shot.

In my last post, “A Lost Providence Christmas,” I noted how Rhode Island Memories works well with my own book, Lost Providence, in tracing the architectural history of downtown, its message of traditional styles’ elegant cohesion of design in the pre-modern age (more of which survives in the capital of Rhode Island than in almost every other American city today) and in its relation to current events in the city’s development.

For example, Page 6 shows a view of downtown at dusk seen from just across the still-covered-up Providence River at the bottom of College Hill. Offices in the buildings are lit, displaying the angularity of regular rows of fenestration against the largely rectangular shapes of their massing. (A lighted billboard advises “Save Sight with Light.”) Only the pyramidal shape of the then-new Industrial Trust Bank Building breaks the pattern, engagingly so. Recent commentary amid the Fane tower imbroglio suggests that the ITBB (now widely known as the “Superman Building”) served, in its supposedly solitary upward thrust, as proof that the luxury shaft will not be a “sore thumb.” Not so! The photo shows how the Industrial Trust seems not the least bit isolated but rather gently gathers together the crescendo of Financial District towers that might otherwise have seemed more of a jumble.

And yet not much later, on Page 28, a picture of the Financial District taken from the opposite direction, near PPAC on Weybosset Street, shows the Industrial Trust as rising higher in the skyline than it does in the earlier picture. Still, it’s no sore thumb, and its shape again serves to emphasize its role in the downtown crescendo of architecture. This shot features a similar “variation on a theme” in the symphonic beaux ideal of a city skyline, a role it would not play as effectively if it rose up straight rather than stepping in as the ITBB does. Most of the modern architecture of downtown today lacks that sublety of design. Indeed, this shot is a useful exercise to demonstrate that modern architecture’s chief characteristic is the lack of the subtlety that classical architecture accomplishes almost by second nature. Examples of this can be seen throughout Memories.

(That photograph, below, is actually not the one from Memories but from my book, Lost Providence, where it forms a collage, performed for me by Noah Schwartz, of the photograph in Memories with the addition of an airship docking at the top of the Industrial Trust Building, which was originally designed as a bank building with an airship docking station on top.)

It would be an enjoyable task to complete this review by describing the interesting aspects of every photograph in a wonderful book, one by one. However, that would try the patience of readers and take until Christmas, possibly cheating some people of an excellent holiday gift. But I will take the time to say, again, that Memories + Lost Providence would make an excellent gift package (for others or for oneself) this holiday season. 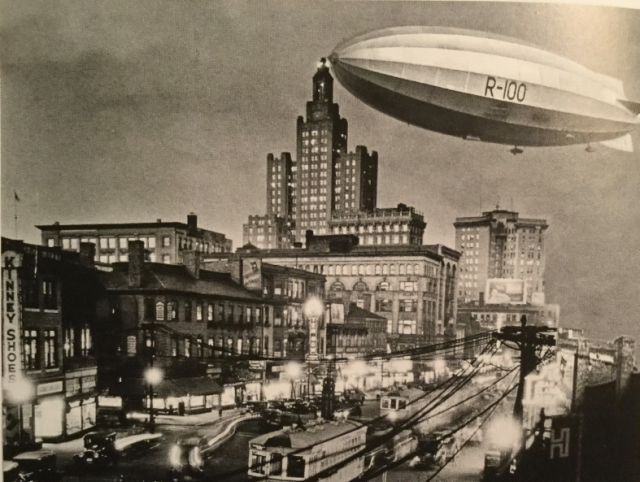 Industrial Trust from Weybosset Street in 1933, with airship docked. (Collage by Noah Schwartz) 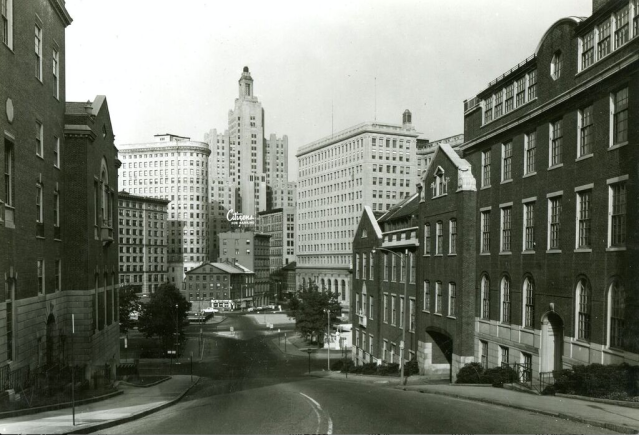 This blog was begun in 2009 as a feature of the Providence Journal, where I was on the editorial board and wrote a weekly column of architecture criticism for three decades. Architecture Here and There fights the style wars for classical architecture and against modern architecture, no holds barred. History Press asked me to write and in August 2017 published my first book, "Lost Providence." I am now writing my second book. My freelance writing on architecture and other topics addresses issues of design and culture locally and globally. I am a member of the board of the New England chapter of the Institute of Classical Architecture & Art, which bestowed an Arthur Ross Award on me in 2002. I work from Providence, R.I., where I live with my wife Victoria, my son Billy and our cat Gato. If you would like to employ my writing and editing to improve your work, please email me at my consultancy, dbrussat@gmail.com, or call 401.351.0457. Testimonial: "Your work is so wonderful - you now enter my mind and write what I would have written." - Nikos Salingaros, mathematician at the University of Texas, architectural theorist and author of many books.
View all posts by David Brussat →
This entry was posted in Architecture, Lost Providence and tagged Lost Providence, photography, Providence Journal, Providence RI, Rhode Island, Rhode Island Memories. Bookmark the permalink.

11 Responses to The Journal’s ‘R.I. Memories’