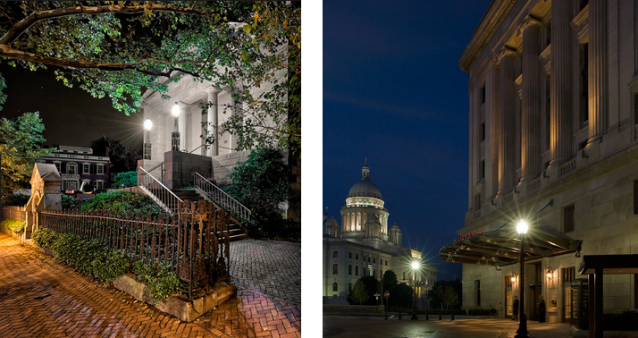 Two of my favorite buildings will host humanities events on Thursday and Friday of this week. If you are attending the silent auction sponsored by the Rhode Island Council for the Humanities tomorrow, you will see the Masonic Temple, now a ritzy hotel, near the State House; if you are attending the next day’s sold-out lecture by Brown humanities professor Arnold Weinstein at the Providence Athenaeum, that is what you will see.

Architecture is not one of the humanities, but perhaps it ought to be. It is known as the Queen of the Arts. However, she might be a bit confused by architecture today, which refuses to speak in a language accessible to all. Modern architecture’s intentional obscurity seems to resemble the studied obscurantism that has overtaken the humanities in recent decades, so I feel obliged to push back against an idea upon which the professor of literature may well express himself. In favor? So I fear.

That is that established methods of teaching and engaging with art and literature are old hat and have been justly overtaken by academic theories that reject traditional meaning.

Weinstein is noted for a column he wrote in the Feb. 23, 2016, New York Times, “Don’t Turn Away From the Art of Life,” in which he states: “The arts can no longer compete with the prestige and financial payoffs promised by studying the STEM fields — a curriculum integrating science, technology, engineering and mathematics.” That’s certainly true, and thoroughly regrettable. But the humanities have only themselves to blame.

STEM disciplines actually retain just that – discipline – a value that has largely been expunged from the arts and humanities. Some educrats even add an A to the acronym, STEAM, so the arts do not feel left out. This merely exemplifies the extent to which the “softer” fields have embraced a spurious complexity so as to offer a superficial egality with more rigorous fields. This twisting de-emphasizes hard facts so as not to exclude or offend anybody.

The process gives rise to an obscurantism that has replaced serious academic thinking in most of the arts and humanities. So discombobulated is the result that it is obvious to most intelligent people in and out of the fields. The most talented obscurantists, perhaps including Weinstein, manage to carry off this reconceptualization of the humanities with no small degree of panache, so that some readers cannot tell they are being spoofed.

The professor, in his column, writes:

A humanistic education is not about memorizing poems or knowing when X wrote Y, and what Z had to say about it. It is, instead, about the human record that is available to us in libraries and museums and theaters and, yes, online. But that record lives and breathes; it is not calculable or teachable via numbers or bullet points. …

In that passage I think I hear Weinstein saying that scholars have uncovered many more things in Shakespeare than he ever dreamed of. Maybe so, but it is important for scholars to be clear about – and admit the importance of – what Shakespeare was intending to say versus what scholars invent and attribute to him in order to establish their analytical reputations. It is vital for future Shakespeare scholars to learn the bullet points of the Bard. Serious analysis is built on a factual foundation. Students who are not tasked to learn the result of centuries of Shakespeare scholarship or to memorize passages from his works may forgo a strength of mind that later will be crucial to analyzing him with any degree of academic rigor. But does anyone care about that anymore?

Professors who insist that students treat straightforward readings of creative works as unnecessary and unreliable social constructs are as bad as architects who reject beauty as vital to architecture. At least modernist architects can be momentarily forgotten under the enchanting influence of the Athenaeum (1838) and the Masonic Temple (1927, completed 2007).

I much prefer this simple and lovely thought from Weinstein’s column:

“How much do you know about Shakespeare,” I once asked a friend who has committed much of her life to studying the Bard. She replied, “Not as much as he knows about me.”

This blog was begun in 2009 as a feature of the Providence Journal, where I was on the editorial board and wrote a weekly column of architecture criticism for three decades. Architecture Here and There fights the style wars for classical architecture and against modern architecture, no holds barred. History Press asked me to write and in August 2017 published my first book, "Lost Providence." I am now writing my second book. My freelance writing on architecture and other topics addresses issues of design and culture locally and globally. I am a member of the board of the New England chapter of the Institute of Classical Architecture & Art, which bestowed an Arthur Ross Award on me in 2002. I work from Providence, R.I., where I live with my wife Victoria, my son Billy and our cat Gato. If you would like to employ my writing and editing to improve your work, please email me at my consultancy, dbrussat@gmail.com, or call 401.351.0457. Testimonial: "Your work is so wonderful - you now enter my mind and write what I would have written." - Nikos Salingaros, mathematician at the University of Texas, architectural theorist and author of many books.
View all posts by David Brussat →
This entry was posted in Architecture, Art and design and tagged architecture, Arnold Weinstein, Arts, Arts and Humanities, Education, Humanities, Literature, Masonic Temple, Providence Athenaeum, Rhode Island Council for the Humanities, STEM. Bookmark the permalink.

2 Responses to Humanities in Providence