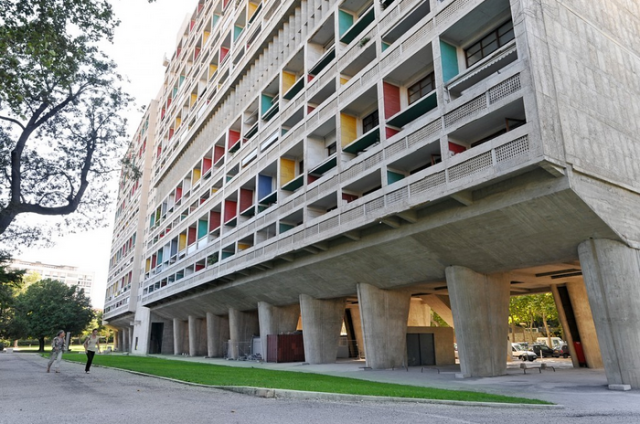 In like fashion, as [Dystopia] makes beautifully clear, the modernists were adept at claiming both that their architecture was a logical development of and aesthetic successor to classical Greek architecture and utterly new and unprecedented. The latter, of course, was nearer the mark: they created buildings that, not only in theory but in actual practice, were incompatible with all that had gone before, and intentionally so. Any single one of their buildings could, and often did, lay waste a townscape, with devastating consequences. What had previously been a source of pride for inhabitants became a source of impotent despair. Corbusier’s books are littered with references to the Parthenon and other great monuments of architectural genius: but how anybody can see anything in common between the Parthenon and the Unité d’habitation …, other than that both are the product of human labor, defeats me.

But of course nothing will come of nothing: architectural modernism has a pre-history just as it has its baleful successors. Professor Curl traces both with panache and erudition and shows that the almost universally accepted history of modernism is actually assiduous propaganda rather than history, resulting not merely in untruth but the opposite of truth. Thus both William Morris and C.F.A. Voysey were claimed by apologists for modernism as progenitors of it, though this is fantastically unlikely to anyone with eyes to see, and Voysey explicitly detested modernism, among other things saying that it was pitifully full of faults and vulgarly aggressive. Nevertheless, [Nikolaus] Pevsner, the great architectural historian, who once called for architecture to be called totalitarian, insisted that Voysey was a precursor of modernism, thus implying that he knew better what Voysey was about than Voysey himself knew.

The widely accepted narrative of modernism a la Gropius is that it was some kind of logical or ineluctable development from the Arts and Crafts movement. This seems to be utterly fantastic: it is like saying that Mickey Spillane is a logical or ineluctable outgrowth of Montesquieu. … Moreover, claiming respectable ancestors is somewhat at variance with equal claims to be starting from zero (as Gropius put it), but such a contradiction is hardly noticed by the grand narrative history of modernism that Professor Curl attacks and destroys.

(Both the professor and his reviewer are far too kind to the modernists. I have taken the liberty of referring to modern architecture’s three leading founders as its Three Stooges. I could not resist, though arguably the Stooges were far more intelligent, would have designed far better buildings, and certainly wrecked far less havoc on the world. I make no apology for using the word lunatics to refer to the three founding modernists.)

Making Dystopia will be available in the U.S. on Oct. 23, though it may be purchased elsewhere, including online through its British publisher, Oxford University Press.

This blog was begun in 2009 as a feature of the Providence Journal, where I was on the editorial board and wrote a weekly column of architecture criticism for three decades. Architecture Here and There fights the style wars for classical architecture and against modern architecture, no holds barred. History Press asked me to write and in August 2017 published my first book, "Lost Providence." I am now writing my second book. My freelance writing on architecture and other topics addresses issues of design and culture locally and globally. I am a member of the board of the New England chapter of the Institute of Classical Architecture & Art, which bestowed an Arthur Ross Award on me in 2002. I work from Providence, R.I., where I live with my wife Victoria, my son Billy and our cat Gato. If you would like to employ my writing and editing to improve your work, please email me at my consultancy, dbrussat@gmail.com, or call 401.351.0457. Testimonial: "Your work is so wonderful - you now enter my mind and write what I would have written." - Nikos Salingaros, mathematician at the University of Texas, architectural theorist and author of many books.
View all posts by David Brussat →
This entry was posted in Architecture and tagged James Stevens Curl, Le Corbusier, Making Dystopia, Mies van der Rohe, New English Review, Oxford University Press, Theodore Dalrymple, Three Stooges, Walter Gropius. Bookmark the permalink.