Yale University’s two new academic residences have received much praise (and much of its opposite) from critics, and its designers at Robert A.M. Stern Architects have won a host of architectural awards from organizations that favor traditional design. Classical architect Richard Sammons recently averred that “Stern has produced the most important and impressive project in the history of the new traditional movement.” Still, a Pritzker Prize may not yet be in the offing, and we await the fate of the monumental proposal to rebuild Penn Station in its original style.

The latest in the train of accolades is architect Mark Alan Hewitt’s essay on Common/Edge, “Contrary to Architecture’s Critical Establishment, Robert A.M. Stern’s Yale Colleges Are a Triump in Placemaking.” “Let me be bold and buck the critical establishment,” Hewitt writes. “The new Yale colleges are the best collegiate dormitories, and among the best campus buildings of the past fifty years – anywhere.”

Its difficult to overstate the wonder of this ambitious project, but apparently not so hard to understate it. Rebutting jabs by other critics at Stern’s revival of James Gamble Rogers’s Collegiate Gothic style, Hewitt argues:

They do not “revert to an archaic, centuries old visual language” in order to conjure up “tradition” that can’t be perpetuated in a modern world. Indeed, they prove that Collegiate Gothic is a living language that continues to offer room for new interpretations, and gives the same pleasure it gave to students in the 1930s.

Precisely. Every time you hear modernists say of a beautiful example of new classical or traditional architecture that it cannot be done today, know that what they mean is not (as they imply) that it cannot be afforded today, or that the craftsmen cannot be found today. No. They mean they don’t think it should be done today, and the reason is that they know it will throw their own stinking work into deep shadow.

Stinking? Well, maybe the word is too harsh. I’ve used worse, but nothing close to what is deserved. Lately, in the rumble of critique vs. critique as the architectural discourse arguably swerves toward tradition in the wake of the recent publication of James Stevens Curl’s Making Dystopia, there is a strange reluctance among some of the ridiculously few critics who prefer traditional design. For example, Clive Aslet has a radiant forecast of the future of the classical revival in one journal – and at the same time, in another, was rude to the author in his generally positive review of Stevens Curl’s book, printed by Oxford University Press. By rights, the volume should have sent the critic over the moon. (See my post “Aslet on classicism’s future.”)

Most people with working brains realize that the key obstacle to a return of beauty in architecture is modern architecture, and Stevens Curl’s book has pegged the modernists dead to rights. Of course modernists are going to pound him, but can’t he count on succor from his allies?

I assume that after his fine review of Stern’s work at Yale, Hewitt will not suffer an Aslet-style lapse into Freudian split personality if and when he reviews Dystopia. But who knows. Even Hewitt here descends into vapidity after curiously citing Yale’s “foresight” in hiring Norman Foster to design a new management-school building that sears the eyeball. He makes several other comments, digging himself in deeper:

Excellence in architectural design doesn’t depend on style. It can only be the result of talent, leadership, and vision. … Let us give credit where credit is due, and stop sowing division in our ranks. … In fifty years future students and the New Haven community will praise [Yale leaders] for their courage and foresight in making these wonderful buildings. They won’t remember the price of the buildings, or the empty aesthetic squabbles that followed their arrival.

Well, these are the most time-honored clichés in the armamentarium of architectural criticism, and I assume Hewitt intended them to serve as a species of diplomacy. But the “empty aesthetic squabbles that followed their arrival”? I certainly would not describe his essay that way. Those squabbles, even when they parrot modernist inanity, are vital. They are also known as the architectural discourse, one that has been ongoing for a couple thousand years. New buildings are part of that conversation, but so, for good or ill, are “mere” words – even the most deplorable mashings-up of language help us figure out which way the arc of architecture might be bending.

In the comments after my post on Aslet’s inner battles, the question arose of what style of criticism is more effective, hard or soft. Here’s my answer:

Is it better to soft-pedal criticism in the hope of moderating the modernists’ hatred of tradition, or is it better to criticize forthrightly, no holds barred, under the assumption that the modernists aren’t listening anyway? The latter, I say. However many architect breasts might be soothed by a gentle approach, I am trying to persuade those who use buildings as most people in the world do: to live in, to work in, to play in, to look at. Not the architects but the public. In fact, critiques of every sort are inevitable, so if you dislike one strategy, rest assured that someone else will be pursuing another. 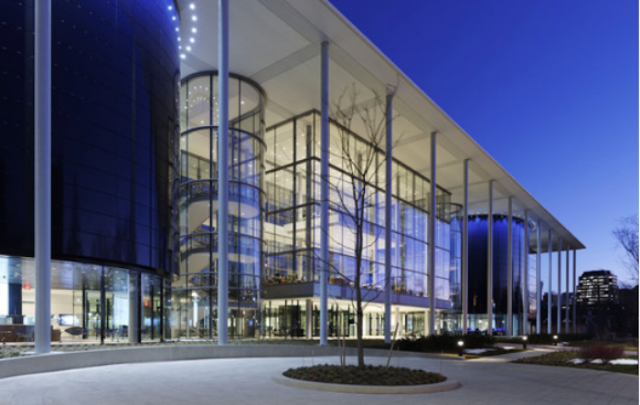 This blog was begun in 2009 as a feature of the Providence Journal, where I was on the editorial board and wrote a weekly column of architecture criticism for three decades. Architecture Here and There fights the style wars for classical architecture and against modern architecture, no holds barred. History Press asked me to write and in August 2017 published my first book, "Lost Providence." I am now writing my second book. My freelance writing on architecture and other topics addresses issues of design and culture locally and globally. I am a member of the board of the New England chapter of the Institute of Classical Architecture & Art, which bestowed an Arthur Ross Award on me in 2002. I work from Providence, R.I., where I live with my wife Victoria, my son Billy and our cat Gato. If you would like to employ my writing and editing to improve your work, please email me at my consultancy, dbrussat@gmail.com, or call 401.351.0457. Testimonial: "Your work is so wonderful - you now enter my mind and write what I would have written." - Nikos Salingaros, mathematician at the University of Texas, architectural theorist and author of many books.
View all posts by David Brussat →
This entry was posted in Architecture, Uncategorized and tagged Benjamin Franklin College, Clive Aslet, Collegiate Gothic, James Stevens Curl, Making Dystopia, Mark Alan Hewitt, Norman Foster, Pauli Murray College, RAMSA, Richard Sammons, Robert A.M. Stern, Yale. Bookmark the permalink.