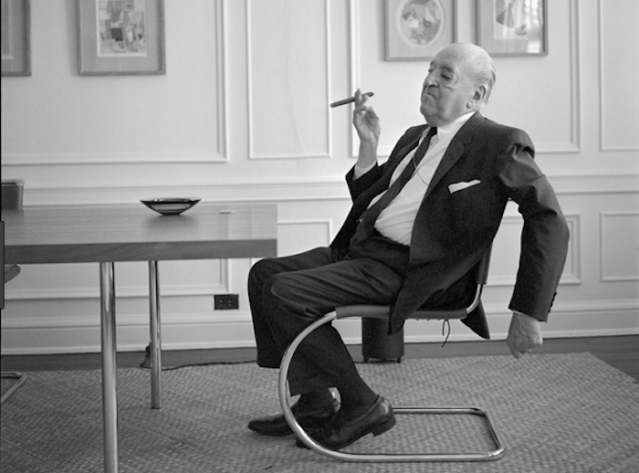 Most people know that one of the three world-historical founders of modern architecture, Charles-Édouard Jeanneret-Gris, changed his name at age 33 to Le Corbusier (the crow). Not until I got to page 126 in James Stevens Curl’s Making Dystopia did I realize that the second of the three, Maria Ludwig Michael Mies, changed his name at age 25 to Ludwig Mies van der Rohe. He is known colloquially as just Mies, as if he were Elvis. Stevens Curl is the first and only scholar I’ve seen put an umlaut over the e in Miës. (The third major founding modernist was Walter Gropius, who, aside from neglecting a pair of middle names, left the name he was born with well enough alone.)

The professor milks the Mies for all it’s worth:

That transformation also involved a bit of self-invention, starting with the addition of an Umlaut, tréma, or diaeresis to the “e” of his surname. Mies has connotations in German with what is seedy, poor, rotten, lousy, wretched, bad, awful, crummy, and out of sorts. A Miesmacher is a defeatist, a grouser, a killjoy, an alarmist, and a Miesepeter is a misery-guts, though its cuddly, pussycat (which would be Miez, Mieze, or Miezekatze in German, with the “z” pronounced as “tz”), soothing sound in English appealed to Modernist enthusiasts when affectionately referring to the German architect. In 1921 Mies became Ludwig Miës van der Rohe (the pretentious van der sounds vaguely grand as well as reassuringly Dutch [von der would not have been possible because it was associated with ennoblement: also anything German, loosely connected with the old order, would not have gone down well at the time, so Dutch was safer. Besides, in Dutch, mies means “nasty, ugly, dismal, or vile,” so when the e is pronounced, a sound something like mee-ess results, which has no such associations in either Dutch or German]. Rohe [Mies’s mother’s maiden name], with suggestions of that which is crude, rough, raw, tough, unrefined, might suggest qualities more fashionable when the proletariat based in the admiration of avant-garde bourgeois opinion, but the word also can be connected with that which is unpleasant, indecent, vulgar, coarse, and brutish).

This amusing paragraph I have transcribed merely to give a taste of Stevens Curl’s ability to tease out the most plausible nuances of what most historians might consider essentially tedious items of biographical factuality.

This blog was begun in 2009 as a feature of the Providence Journal, where I was on the editorial board and wrote a weekly column of architecture criticism for three decades. Architecture Here and There fights the style wars for classical architecture and against modern architecture, no holds barred. History Press asked me to write and in August 2017 published my first book, "Lost Providence." I am now writing my second book. My freelance writing on architecture and other topics addresses issues of design and culture locally and globally. I am a member of the board of the New England chapter of the Institute of Classical Architecture & Art, which bestowed an Arthur Ross Award on me in 2002. I work from Providence, R.I., where I live with my wife Victoria, my son Billy and our cat Gato. If you would like to employ my writing and editing to improve your work, please email me at my consultancy, dbrussat@gmail.com, or call 401.351.0457. Testimonial: "Your work is so wonderful - you now enter my mind and write what I would have written." - Nikos Salingaros, mathematician at the University of Texas, architectural theorist and author of many books.
View all posts by David Brussat →
This entry was posted in Architecture and tagged James Stevens Curl, Le Corbusier, Ludwig Mies van der Rohe, Making Dystopia, Mies, Modern Architecture, Oxford University Press, Self-Promotion. Bookmark the permalink.