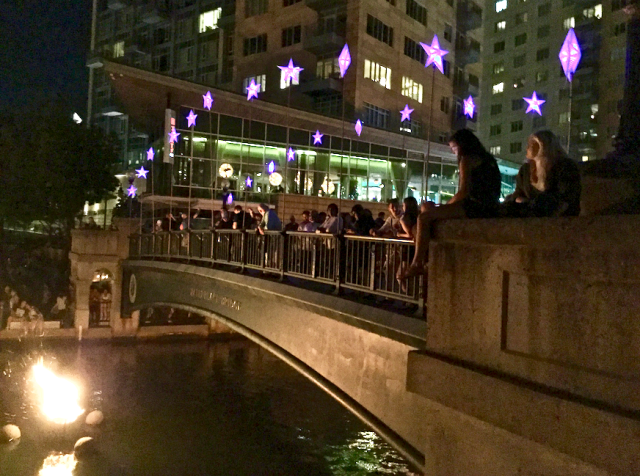 WaterFire attendees watch from a pedestrian bridge at Waterplace. (Photo by author)

The PawSox may be goners, but Rhode Island remains chock full of excellent attractions. One list summarizing what to see or do in the Ocean State comes from Jim Gillis’s column in the Newport Daily News lamenting that “PawSox move is a strikeout for our state.” It reads:

Rhode Island needs to hold onto its attractions. I can’t imagine us without the jazz and folk festivals, the tennis tournament, sailing regattas, the mansions, Trinity Rep, the Providence Performing Arts Center, Roger Williams Park Zoo.

Well, the beaches, for one thing. And a lot more. But it startled me that WaterFire was not on Gillis’s list. Perhaps a journalist cannot be expected to mention everything.

I attended last night’s WaterFire and it was as crowded as ever, but oh so relaxing. A beautiful evening with a full moon must have drawn its usual 20,000, several times the average draw at McCoy Stadium. People walk or sit through all or part of the event, in rapture at its charms or oblivious to them, focused instead on whomever they are with. Sometimes I think WaterFire must be where the art of conversation reaches its apogee in Rhode Island. Next year WaterFire will celebrate its 25th birthday. A quarter of a century.

I wonder whether Barnaby Evans, its creator and artistic director, has some intuitive feel for whether most who attend are repeat visitors, how many visitors at each event are visiting for the first time, how many are visiting from overseas, what the breakdown of income, education, nationality, race and other attributes might be, how many enjoy the event, how many suffer through it – I cannot imagine it could be many; nobody attends in order to get their money’s worth, since unlike a ballgame a WaterFire is free for those who attend (though donations are encouraged). And you are free to leave at any time, subject of course to the constraints, if any, of family and friends.

In fact, it might be interesting to compare the experience of a WaterFire with the experience of a baseball game. Both involve spending lengths of time watching nothing happen. I am being jocular, of course. Baseball is not just watching the grass grow while waiting for a ballplayer to get a hit. And WaterFire is not just watching fires burn while waiting for the braziers to be stoked. One is a work of art, the other is a work of athletics. At both events there is music to listen to, people to talk to, other people to watch. At both there is food to eat. Baseball can be enjoyed day or night for seven months out of the year; WaterFire can only be enjoyed by night, but it does occupy a similar swath of the warmer months. You can attend 70-80 ballgames in a season (if you want) but only about a dozen WaterFires, one every two or three weeks or so, May through November. But the average ballgame only lasts two and a half hours, and then you pile out of the stadium and then out of the parking lot all at once. On the other hand, a WaterFire event can stretch on for upward of six or seven hours as the sun sets earlier and earlier as the season, and people can leave whenever they want. There is the element of suspense in baseball – who’s going to win the game! WaterFire offers little suspense. There is no winner or loser; it’s how you play the game. Maybe some attendees can bet on whether flames will bank down to a near smolder before the boats come to stoke it with logs. Or you can bet on the time that elapses between the passage of striking women, babies in strollers, dogs on leashes, or whatever turns you on  (or off). Of course, as in baseball, you don’t have to bet money; many baseball fans like to add up and figure out the game’s meaning in statistics. No doubt there are WaterFire fans with similar proclivities.

One of the biggest differences is that a baseball team might bugger out on you and move to another city. The most unpopular historical personage in Washington, D.C., is not Dick Nixon but Bob Short, who in 1972 moved the Senators, whose games I occasionally attended as a boy, to Arlington, Texas. WaterFire? Not so much!

This blog was begun in 2009 as a feature of the Providence Journal, where I was on the editorial board and wrote a weekly column of architecture criticism for three decades. Architecture Here and There fights the style wars for classical architecture and against modern architecture, no holds barred. History Press asked me to write and in August 2017 published my first book, "Lost Providence." I am now writing my second book. My freelance writing on architecture and other topics addresses issues of design and culture locally and globally. I am a member of the board of the New England chapter of the Institute of Classical Architecture & Art, which bestowed an Arthur Ross Award on me in 2002. I work from Providence, R.I., where I live with my wife Victoria, my son Billy and our cat Gato. If you would like to employ my writing and editing to improve your work, please email me at my consultancy, dbrussat@gmail.com, or call 401.351.0457. Testimonial: "Your work is so wonderful - you now enter my mind and write what I would have written." - Nikos Salingaros, mathematician at the University of Texas, architectural theorist and author of many books.
View all posts by David Brussat →
This entry was posted in Providence, Rhode Island and tagged Barnaby Evans, Culture, PawSox, Pawtucket, Providence RI, Rhode Island, Tourism, WaterFire. Bookmark the permalink.

6 Responses to R.I. still has WaterFire