Architectural Digest has posted “The 30 Most Beautiful Main Streets Across America,” and they are beautiful. I examined each photo and saw no buildings identifiable as modern architecture. For while civic beauty is primarily the presence of lovely old buildings; it is also the absence of ugly new buildings. So, it seems that all of these small-town – that’s the qualifier – main streets qualify as beautiful.

Which street is the most beautiful? Hard to say. Most looked so much alike they could have been anywhere – Anytown USA. That is not a criticism. As Tolstoy said, “All happy streets are alike; each unhappy street is unhappy in its own way.” The novelist was channeling families not streets, but the principle is the same. Just look into any textbook of urban planning.

I don’t mean to sound the same note here as the Anyplace USA formed by cookie-cutter glass-box modernism or cookie-cutter big-box stores. You could say both downtowns and the suburbs are alike in their unhappiness, too, but each in their own way. And nobody wants to go there.

The only street among the 30 that is not part of a historic district – or at least historic without any official designation – is Rosemary Beach, Fla., a New Urbanist community founded in 1995 on the Panhandle just a few miles from Seaside, the original New Urbanist community. Seaside might have made it onto the list, but its founders decided to undermine its brand, for some reason letting quasi-modernist buildings go up on the main street of that otherwise magically beautiful resort village. Not so in Rosemary Beach. It kept its chic wannabe in check.

That no small-town main street was unjustly excluded from this list is unlikely. Surely Westerly, here in Rhode Island, ought to have made the cut, unless Westerly constitutes too large a metropolis – a town rather than a small town. But hold on! The population of Paducah, Ky., 25,024, is larger than Westerly’s 22,787. It made the list. So, that having been mathematically established, the top photo on this post is my favorite one from among the 30 assembled by AD. The shots below, since no small town in the Ocean State made the list, are of Westerly. I could not find Westerly’s inspired classical Post Office shot amid a grouping of buildings, but mark my words, it occupies a princely spot downtown.

I admit that I was swayed in favor of Staunton, Va., by the quality of the photograph, so evocative, so suggestive of the verticality of the best streets. But other towns showed much appeal in that their photographers captured the hard-to-define quality of a miniaturized big-city downtown. The best of this lot is difficult to identify, but you’ll know which ones I mean as you scroll down the list. Below, however, is Westerly. 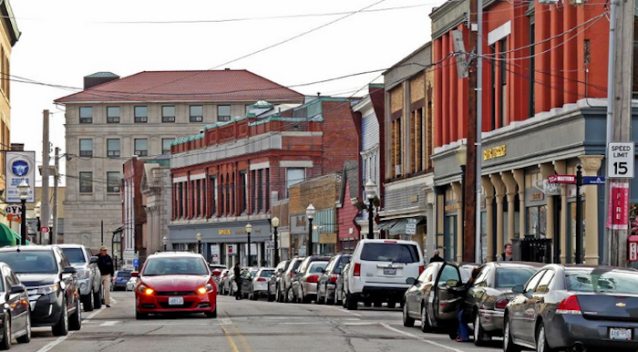 This blog was begun in 2009 as a feature of the Providence Journal, where I was on the editorial board and wrote a weekly column of architecture criticism for three decades. Architecture Here and There fights the style wars for classical architecture and against modern architecture, no holds barred. History Press asked me to write and in August 2017 published my first book, "Lost Providence." I am now writing my second book. My freelance writing on architecture and other topics addresses issues of design and culture locally and globally. I am a member of the board of the New England chapter of the Institute of Classical Architecture & Art, which bestowed an Arthur Ross Award on me in 2002. I work from Providence, R.I., where I live with my wife Victoria, my son Billy and our cat Gato. If you would like to employ my writing and editing to improve your work, please email me at my consultancy, dbrussat@gmail.com, or call 401.351.0457. Testimonial: "Your work is so wonderful - you now enter my mind and write what I would have written." - Nikos Salingaros, mathematician at the University of Texas, architectural theorist and author of many books.
View all posts by David Brussat →
This entry was posted in Architecture, Photography and tagged Architectural Digest, Historic Districts, Modern Architecture, New Urbanism, Rosemary Beach FL, Seaside FL, Staunton VA, Streets, Urban Planning, Westerly. Bookmark the permalink.