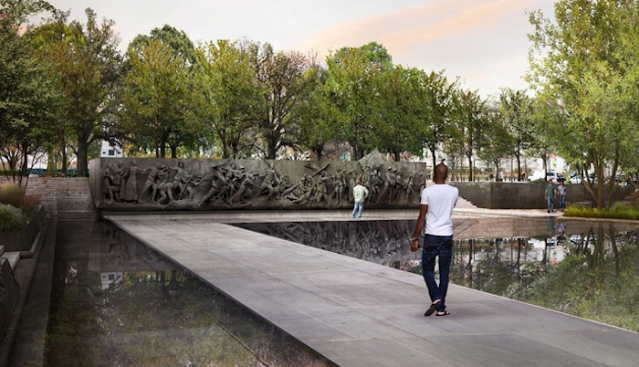 The National World War II Memorial opened in 2004 on the Mall with a classical design that has been wildly popular with WWII veterans. Had America regained its senses after decades of embarrassing modernist monuments? Alas, no. A nontraditional memorial for a traditional man is being built for Dwight Eisenhower. After years of honorable resistance, his family finally threw in the towel, betraying themselves, their patriarch, and the many who backed their longstanding refusal to approve a design that honors architect Frank Gehry instead of the supreme Allied commander in Europe and 34th U.S. president. The resulting blotch of God’s wrath on memory, when it is completed after opponents came this close to blocking it, will be an insult to Ike and a national eyesore for decades.

Thankfully, America had the opportunity for something like a do-over by way of a proposed national monument to World War I. But that, too, is being botched. The competition for a monument in Washington to honor the First World War, sponsored by the World War One Centennial Commission, could have trod the triumphal footsteps of the Second World War monument, designed by Rhode Island architect Friedrich St. Florian. But instead of selecting a bold classical design by Richmond, Va., architect Devin Kimmel, the commission selected a sculpture of a cannon and crew in a bland square designed by Joseph Weishaar and surrounded on three sides by a low wall with a bas-relief by sculptor Sabin Howard. (In fact, the bas-relief was so understated in the submission illustrations that I originally thought the proposal was modernist, and said so in my roundup of the five finalists, “More on WWI competition.”) Kimmel’s design would have had the grandeur needed to anchor that end of Pennsylvania Avenue, but it got the heave-ho.

The commission blundered, but it may have partly redeemed itself by kicking all three of the ridiculous modernist finalists to the cutting-room floor.

Since then, according to the noted critic Catesby Leigh, the Weishaar/Howard proposal has undergone far more adverse tinkering than even the Gehry Ike, whose nadir was achieved instantly. The relief of the figures in Howard’s bronze wall frieze was deepened admirably, but its extent was shortened drastically and shunted to a stand-alone wall facing in a direction that appears to have flip-flopped almost weekly according to the mood of the commission. In a Weekly Standard essay entitled “The Battle of Pershing Park,” Leigh describes the frustrations and indignities heaped on the design. Finally, the site – Pershing Park, a dolorous 1982 plaza near the White House designed by modernist Paul Friedberg – was named to the National Register of Historic Places, which eases the way for lawsuits against the project.

That seems to have pushed the commission to seek to switch the location to a site just off the Mall, but apparently that’s not yet a done deal.

Originally, the new monument was intended to open on Nov. 11, 2018 – three and a half months from now. No hurry. The last WWI vet died in 2011. Traditionalists did a great job trying to spike the Gehry Ike, yet failed despite having all of the arguments on their side. But the trads are pikers next to the mods, who control the commanding heights of art and architecture in America. They always bring a gun to a knife fight.

The Public Broadcasting System, for example, has been running a documentary called “Ten Monuments that Changed America.” * The ten stretch from the Statue of Liberty and the Lincoln Memorial to the Gateway Arch, the Vietnam War Memorial, the AIDS Quilt, and the 168 empty chairs at the center of the Oklahoma City National Memorial, which mourns the terrorist bombing of the Alfred Murrah Federal Building in 1995. Watch the video linked above and you will see displayed, with unwitting accuracy, the decline and fall of monumental remembrance in America.

*Scroll past opening video, which is a trailer, down to “Episodes” and select the middle video and click for full program.

This blog was begun in 2009 as a feature of the Providence Journal, where I was on the editorial board and wrote a weekly column of architecture criticism for three decades. Architecture Here and There fights the style wars for classical architecture and against modern architecture, no holds barred. History Press asked me to write and in August 2017 published my first book, "Lost Providence." I am now writing my second book. My freelance writing on architecture and other topics addresses issues of design and culture locally and globally. I am a member of the board of the New England chapter of the Institute of Classical Architecture & Art, which bestowed an Arthur Ross Award on me in 2002. I work from Providence, R.I., where I live with my wife Victoria, my son Billy and our cat Gato. If you would like to employ my writing and editing to improve your work, please email me at my consultancy, dbrussat@gmail.com, or call 401.351.0457. Testimonial: "Your work is so wonderful - you now enter my mind and write what I would have written." - Nikos Salingaros, mathematician at the University of Texas, architectural theorist and author of many books.
View all posts by David Brussat →
This entry was posted in Architecture and tagged Catesby Leigh, Devin Kimmel, Eisenhower memorial, Frank Gehry, Friedrich St. Florian, Memorials, Monuments, National World War I Memorial, Paul Friedberg, Ten Monuments that Changed America. Bookmark the permalink.