‘Dream of Venice in B&W’ 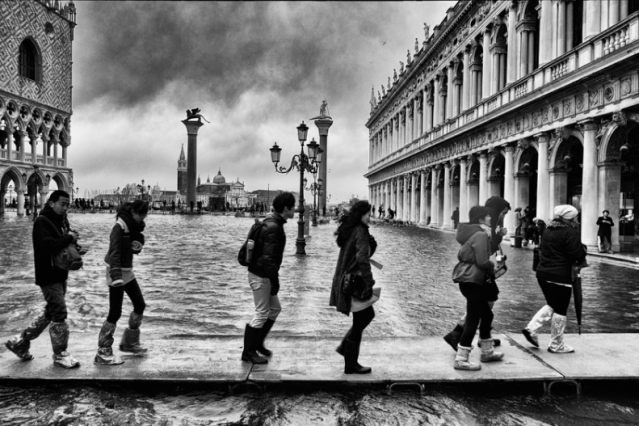 JoAnn Locktov, the editrix and impresaria of photographic essays of Venice in book form, sends me another of her beautiful works: Dream of Venice in Black and White, the third in her “Dream of Venice” series, published by Bella Figura Publications in California. It’s difficult to express in words the photos within – people, buildings, details, vistas – shot by a host of photographers, mostly within the past year or so, though one harks back to 1959.

The one above, “Abbey Road, Venice,” shot by Filippo Salvalaggio in 2015, shows the wry wit between the covers of this book. Another photo, “A Gondolier in Venice,” shot in 2016 by Michela Ceola, catches a gondolier attempting to turn about in a canal narrower than his boat is long. Among his cargo, atop the pile of stuff closest to him, there appears to be a priest reading a book, though he’s too small to be a real person. Maybe he is a statuette, or maybe he’s a figment of my imagination. The very next photo, “Ripple,” taken in 2016 by Lisa Katsiaris, is of a ripple made by a gondolier’s oar. A squiggle of water at the upper left takes the shape of an elegantly dressed woman leaping upward, perhaps into the air, or into a canal.

The photos all invite such investigation, and the latter two are reproduced below. I was impressed to see that the first blurb on the back of the book was from Salvatore Settis, the author of If Venice Dies, which I reviewed here. I noticed the blurb after reading the introduction to Venice in B&W by Tiziano Scarpa, a novelist, poet and playwright native to Venice. Settis’s book spends much time regretting that so many tourists visit Venice, but Scarpa is more sympathetic to these misunderstood creatures, who come to places like Venice in their thousands and millions because modern architecture has robbed the world of most places worthy of our love. Scarpa tells of moving into an apartment on a canal, stepping out on its embankment and greeting what he first takes to be a pair of neighbors and then discovers they are merely tourists renting next door. He thinks about it, and writes:

A misunderstanding, it would seem. And yet it wasn’t: I was right to introduce myself to those two like the new kid on the block. Without even realizing it, I came to know the true lay of the land. They were real inhabitants of the neighborhood, even if they were only staying in Venice for one weekend of the whole of their lives. … [Tourists] envelop themselves in Venice – all of it. It is not a frivolous gesture but a deeply philosophical one.

Leaving aside the problems of touristic inundation (which certainly can be done more easily by me than by actual Venetians), Scarpa’s attitude is compelling. A man or woman who visits Venice for a day, a week, a month seeks to worship the city as a god of civitas – more so, at least, than the mere fulltime resident of Venice. Tourists ought not be twitted for such a humane inspiration, even if some of them don’t know quite what they are doing.

In fact, in my review of Settis’s magnificent book, I twitted him for not seeming to recognize that one of the strategies for saving Venice and other historic cities that he ought to have discussed is the construction of more new buildings that partake of the very aspects of a city’s soul, as he discusses with such depth and feeling. It is a strange omission. But not really all that strange. Settis is a college professor and an architectural historian, and he is true to type: he feels discomfort when confronted by a contrarian idea – in this case the idea of a new building designed in a timeless style, even if that style grows out of the history, the culture, the soul of the city in which it is built – in this case, Venice. Oh! What a strange concept!

In fact, allow me to presume to dare – nay, to double-dare – the Society of Architectural Historians to invite Curl, who has written 40 books, to speak at their next annual conference, which is scheduled to be held right here in River City – here in Providence, that is – next year, April 24-28, 2019.

Below are the second and third photos from Dream of Venice in Black and White, as described above. 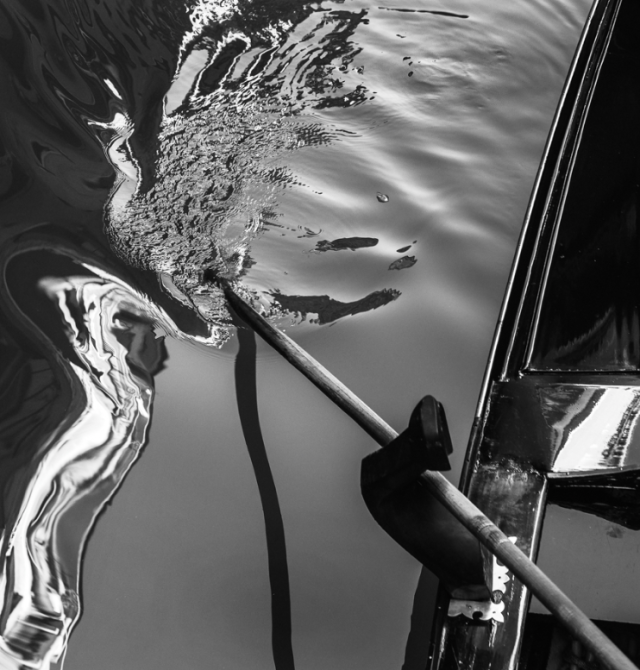 This blog was begun in 2009 as a feature of the Providence Journal, where I was on the editorial board and wrote a weekly column of architecture criticism for three decades. Architecture Here and There fights the style wars for classical architecture and against modern architecture, no holds barred. History Press asked me to write and in August 2017 published my first book, "Lost Providence." I am now writing my second book. My freelance writing on architecture and other topics addresses issues of design and culture locally and globally. I am a member of the board of the New England chapter of the Institute of Classical Architecture & Art, which bestowed an Arthur Ross Award on me in 2002. I work from Providence, R.I., where I live with my wife Victoria, my son Billy and our cat Gato. If you would like to employ my writing and editing to improve your work, please email me at my consultancy, dbrussat@gmail.com, or call 401.351.0457. Testimonial: "Your work is so wonderful - you now enter my mind and write what I would have written." - Nikos Salingaros, mathematician at the University of Texas, architectural theorist and author of many books.
View all posts by David Brussat →
This entry was posted in Architecture, Books and Culture and tagged Dream of Venice in Black and White, If Venice Dies, James Steven Curl, JoAnn Locktov, Making Dystopia, Providence RI, Salvatore Settis, Society of Architectural Historians, Venice. Bookmark the permalink.

5 Responses to ‘Dream of Venice in B&W’