Krock puts his finger on it 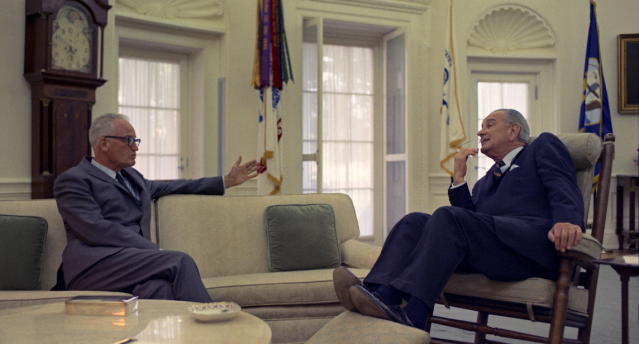 Barry Goldwater and Lyndon Johnson in the Oval Office, May 1968. (politico.com)

Nevertheless, today Politico ran “When the CIA Infiltrated a Political Campaign.” The look-back on the CIA’s spy in the 1964 presidential campaign of Barry Goldwater tickled my fancy in the most predictable way. Politico writer Steve Usdin describes how LBJ got the drop on AuH2O by having the CIA purloin from the GOP nominee’s headquarters the advance text of a speech in which he planned to announce a task force. Forewarned, LBJ announced his own task force first, making his rival look silly.

Having the CIA steal a speech was not LBJ’s only advantage. Usdin quotes fabled Timesman Arthur Krock – what a name for a pundit! – that Goldwater was “hopelessly outmatched” in where he delivered his televised speech:

The President of the United States [gave his] in the classic décor of his Oval Office at the White House; his helplessly scooped opponent [gave his] in the modernistic carnival setting of the Coliseum that was built for the Seattle World’s Fair.

… Imagine the announcement of the creation of a task force getting space on any news broadcast today!

This blog was begun in 2009 as a feature of the Providence Journal, where I was on the editorial board and wrote a weekly column of architecture criticism for three decades. Architecture Here and There fights the style wars for classical architecture and against modern architecture, no holds barred. History Press asked me to write and in August 2017 published my first book, "Lost Providence." I am now writing my second book. My freelance writing on architecture and other topics addresses issues of design and culture locally and globally. I am a member of the board of the New England chapter of the Institute of Classical Architecture & Art, which bestowed an Arthur Ross Award on me in 2002. I work from Providence, R.I., where I live with my wife Victoria, my son Billy and our cat Gato. If you would like to employ my writing and editing to improve your work, please email me at my consultancy, dbrussat@gmail.com, or call 401.351.0457. Testimonial: "Your work is so wonderful - you now enter my mind and write what I would have written." - Nikos Salingaros, mathematician at the University of Texas, architectural theorist and author of many books.
View all posts by David Brussat →
This entry was posted in Architecture, Humor and tagged Arthur Krock, Barry Goldwater, CIA, Lyndon B. Johnson, New York Times, Oval Office, Political Spying, Politico, Seattle World's Fair. Bookmark the permalink.