Leon Krier has sent a brief video, 57 seconds in all, of the recently completed restoration, in Frankfurt, Germany, of that city’s Huhner Markt area, Almost as pleasing as what the video reveals is what it replaces – in Krier’s words, “a concrete monster.” 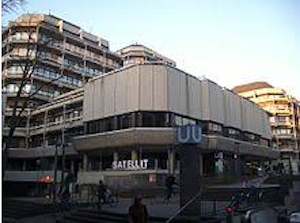 At the start of the video, looming on the horizon beyond the market district that has been restored, is central Frankfurt, a dastardly collusion of skyscrapers typical of others in Europe, America and elsewhere. The contrast with the fine-grained urbanism of historic Frankfurt inspired me to think along what might be called Krierian lines. I thought of how central Frankfurt would look today if German authorities after World War II had not embraced modern architecture, and its cities had been rebuilt properly. New ways to perfect traditional buildings and invent novel forms of ornament, new structural and massing possibilities, and new technologies and materials to enhance usefulness and reduce cost would have created a Frankfurt visually more graceful and more delightful to experience – just as the old Huhner Markt has now been rebuilt.

To engage in such a fantasy requires imagining that modern architecture itself never got beyond fad status. The fad of modernism arose in Europe between the wars, whereas in America it arose after the second war. A complicated strand of influences and events enabled modern architects to topple tradition from an establishment it had dominated to the exclusion of any genuine rivals for hundreds if not a couple thousand years. The process was different on either side of the Atlantic. How this tragedy came about is a thrilling and, I think, largely untold story, maybe worthy of my next book.

Look at the video and think of what could have been and what could still be. Around the world, every “concrete monstrosity” that reaches its obsolescence should be demolished and replaced by architecture inspired by the hundreds and thousands of years of accrued experience of architects and crafts people improving best practices and burnishing, generation after generation, the virtuosity of buildings and the urbanism that enables them – and enabled them for centuries – to live together, enhancing the daily experience of every human being. It might take a few decades, but we can do that again.

This blog was begun in 2009 as a feature of the Providence Journal, where I was on the editorial board and wrote a weekly column of architecture criticism for three decades. Architecture Here and There fights the style wars for classical architecture and against modern architecture, no holds barred. History Press asked me to write and in August 2017 published my first book, "Lost Providence." I am now writing my second book. My freelance writing on architecture and other topics addresses issues of design and culture locally and globally. I am a member of the board of the New England chapter of the Institute of Classical Architecture & Art, which bestowed an Arthur Ross Award on me in 2002. I work from Providence, R.I., where I live with my wife Victoria, my son Billy and our cat Gato. If you would like to employ my writing and editing to improve your work, please email me at my consultancy, dbrussat@gmail.com, or call 401.351.0457. Testimonial: "Your work is so wonderful - you now enter my mind and write what I would have written." - Nikos Salingaros, mathematician at the University of Texas, architectural theorist and author of many books.
View all posts by David Brussat →
This entry was posted in Architecture, Development, Video and tagged Frankfurt, Germany, Huhner Markt, Restoration, Video, YouTube. Bookmark the permalink.