Above is how the Roman Forum might look at night today if it had never degenerated into ruins since the empire, or if it had been reconstructed as it was at the apogee of its ancient fame. The work, by Gilbert Gorski, was given to Léon Krier as consolation for the rejection, by Gorski’s publisher, of Krier’s introduction to The Roman Forum: A Reconstruction and Architectural Guide, by Gorski and James Packer. (Krier’s essay was posted in its entirety in “Krier: Ruins and discontents.”) 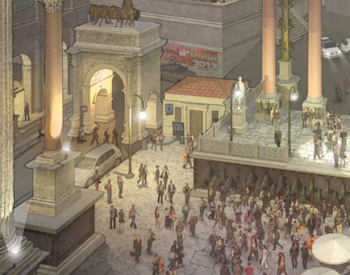 The inspiration for Gorski’s rendering comes from the last line of Krier’s introduction: “To ensure maximum effect, I recommend the reader to imagine the figurants sporting contemporary clothing and steering modern vehicles.”

Clayton Fulkerson, a builder of classical models who lives in Warwick, Rhode Island, and who tends to object to the reconstruction of ruins unless they are substantially intact already, sent me the following description and photos of Cinecittá, a series of movie sets for films set in ancient Rome:

Cinecittá is a huge studio complex on the outskirts of Rome. It was conceived as part of Mussolini’s plan to revive the Italian economy. Films such as Ben Hur (the good one), Cleopatra and, more recently, Gangs of New York and the Rome series by HBO were shot there. Virtually all of Fellini’s and Zeffirelli’s films were also.
.
The tour took us to only part of the vast Rome set. HBO spared no expense and had to abort the series because of its huge cost. No stone was used in the set’s construction. It’s all a fantastic fiberglass façade mounted on steel framing. You would swear it’s all the real deal, as the Italians are devilishly good at this kind of thing. The “stones” paving the streets are cast from concrete using only five molds. The pieces are arranged in such a way that you’d never know the economies involved. When production ceases, the sets become the property of the studio, which has the right to rent them to other production companies. 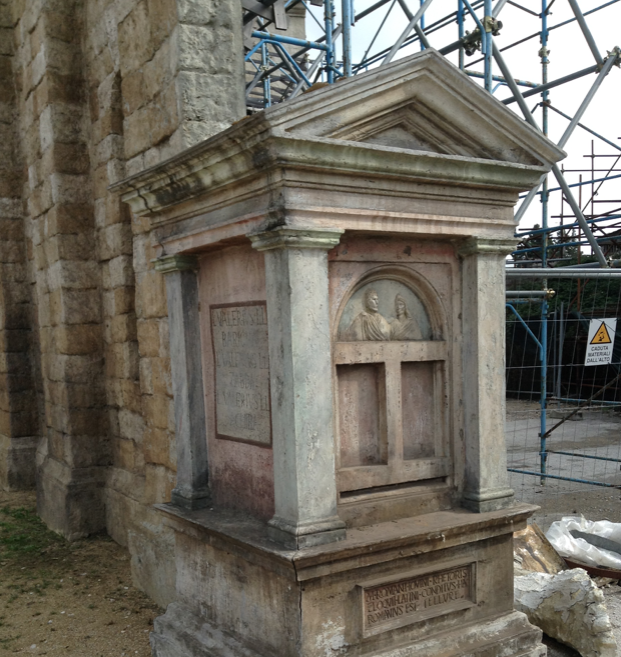 This blog was begun in 2009 as a feature of the Providence Journal, where I was on the editorial board and wrote a weekly column of architecture criticism for three decades. Architecture Here and There fights the style wars for classical architecture and against modern architecture, no holds barred. History Press asked me to write and in August 2017 published my first book, "Lost Providence." I am now writing my second book. My freelance writing on architecture and other topics addresses issues of design and culture locally and globally. I am a member of the board of the New England chapter of the Institute of Classical Architecture & Art, which bestowed an Arthur Ross Award on me in 2002. I work from Providence, R.I., where I live with my wife Victoria, my son Billy and our cat Gato. If you would like to employ my writing and editing to improve your work, please email me at my consultancy, dbrussat@gmail.com, or call 401.351.0457. Testimonial: "Your work is so wonderful - you now enter my mind and write what I would have written." - Nikos Salingaros, mathematician at the University of Texas, architectural theorist and author of many books.
View all posts by David Brussat →
This entry was posted in Architecture and tagged Ancient Ruins, Cinecitta, Clayton Fulkerson, HBO Rome, Leon Krier, Reconstruction, Roman Forum, Rome. Bookmark the permalink.