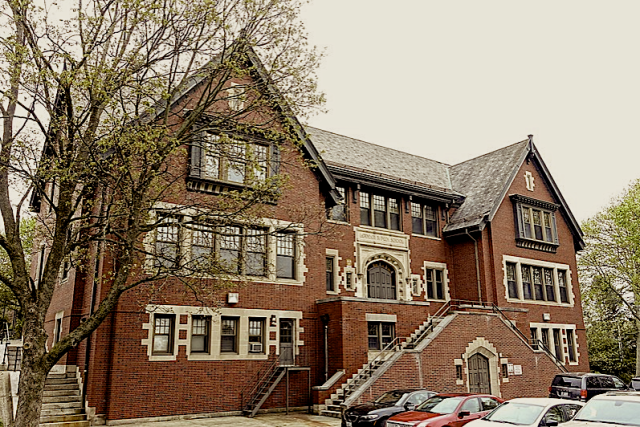 Next Tuesday at 6:30 p.m., the Barrington Public Library will host what may turn out to be my final public lecture about my book, Lost Providence. Only private talks have been scheduled for now from here on out, but at this open talk the public can learn things about our architectural environment that may be new to them, and for free.

That has to do with why the Barrington Public Library and its neighbor, Barrington Town Hall, and all other buildings that prize beauty not over but alongside utility, as opposed to utility alone (and often a bogus utility), are virtually banned in the field of architecture, and have been for over half a century. That means buildings such as the library are always at risk, whether local preservationists are aware of it or not. 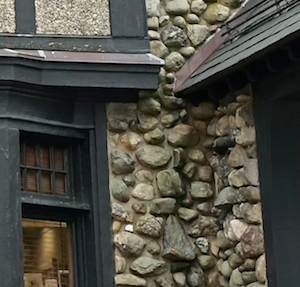 The library sits right next to Barrington Town Hall, one of Rhode Island’s most exquisite municipal buildings, finished in 1888 to the design of Stone, Carpenter & Willson. We all know what it looks like – a romantic exercise in the Tudor manor style, with gables and turrets and rustic walls of fieldstone (left) and half timber. One might swoon just driving by it, and perhaps overlook the Barrington Public Library. That would be a mistake.

The Leander Peck School was completed in 1917. The town library was moved there from the town hall sometime after 1976. Its Elizabethan Revival style, designed by the Providence firm of Martin & Hall, does not play second fiddle to town hall. Its aesthetic pedigree is as steeped in history (below left) as the town hall, even though it may be a notch below it in sheer romance. 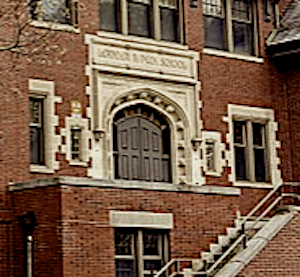 But that notch scarcely limits its allure in the least, and the people of Barrington (and whoever else might show up at the party) have a right to know why beautiful buildings are, nowadays, the rarest buildings to arise. The profession of architecture harbors a bias against tradition. It discriminates against beauty. Ugliness is considered a feather in its cap. It is not just, and it’s not fair, but it’s true today. Find out why on Tuesday. 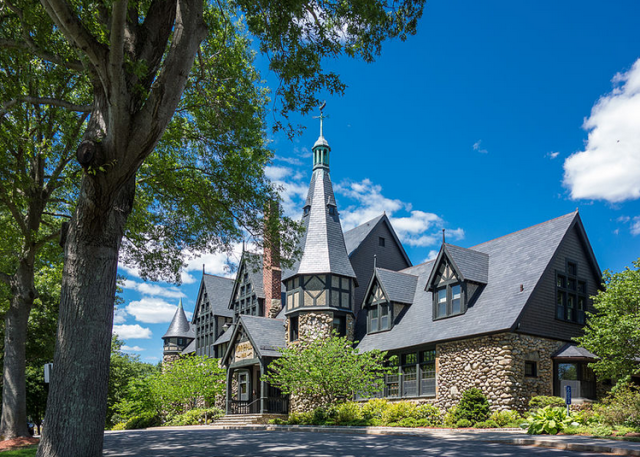 This blog was begun in 2009 as a feature of the Providence Journal, where I was on the editorial board and wrote a weekly column of architecture criticism for three decades. Architecture Here and There fights the style wars for classical architecture and against modern architecture, no holds barred. History Press asked me to write and in August 2017 published my first book, "Lost Providence." I am now writing my second book. My freelance writing on architecture and other topics addresses issues of design and culture locally and globally. I am a member of the board of the New England chapter of the Institute of Classical Architecture & Art, which bestowed an Arthur Ross Award on me in 2002. I work from Providence, R.I., where I live with my wife Victoria, my son Billy and our cat Gato. If you would like to employ my writing and editing to improve your work, please email me at my consultancy, dbrussat@gmail.com, or call 401.351.0457. Testimonial: "Your work is so wonderful - you now enter my mind and write what I would have written." - Nikos Salingaros, mathematician at the University of Texas, architectural theorist and author of many books.
View all posts by David Brussat →
This entry was posted in Architecture, Lost Providence and tagged Barrington Public Library, Barrington RI, Barrington Town Hall, Lost Providence, Modern Architecture, traditional architecture. Bookmark the permalink.