Empire of the Algonquin 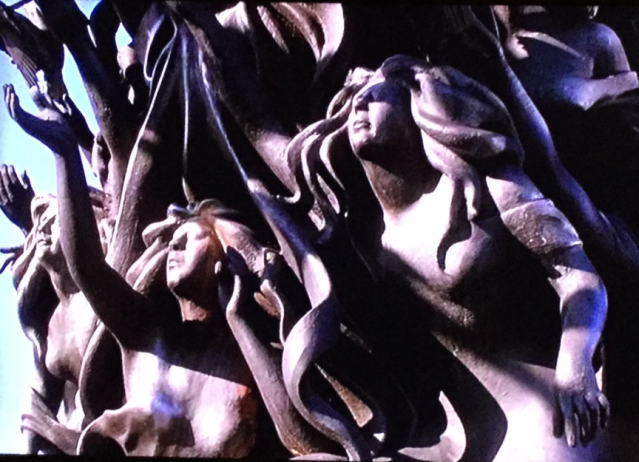 Just saw one of my favorite movies this evening, Steven Spielberg’s Empire of the Sun, in which a British boy, son of a factory owner in occupied prewar Shanghai, is split from his parents as they try to flee after Dec. 7, and ends up in an internment camp next to a Japanese fighter base. Eventually the war comes to a close, the internees wander out of the camp, and Jim (Christian Bale), after witnessing an atom-bomb blast from a distance, passes under a carved arch embellished as shown above, and finds himself in a pasture (below) littered with the confiscated possessions of his family and their fellow wealthy expats, including Jim’s father’s 1934 Packard Eight Club Sedan and his mother’s white baby grand piano. The music, composed by John Williams, is enchanting, even haunting.

Anyhow, that lush collection reminded me of the extraordinary furnishings of Boston’s Algonquin Club. In fact, I can testify that it’s much better as arrayed there than similar stuff in scattered heaps were in the film.

All this by way of reminding readers that I’ll be speaking there about my book, Lost Providence, this coming Tuesday, Feb. 20, at 6:30 p.m. The address is 217 Commonwealth Ave. The event is sponsored by the New England chapter of the Institute of Classical Architecture & Art. Reservations are $25 for ICAA members and $35 for the public.

What a show! I refer to the movie. The lecture has not yet occurred. 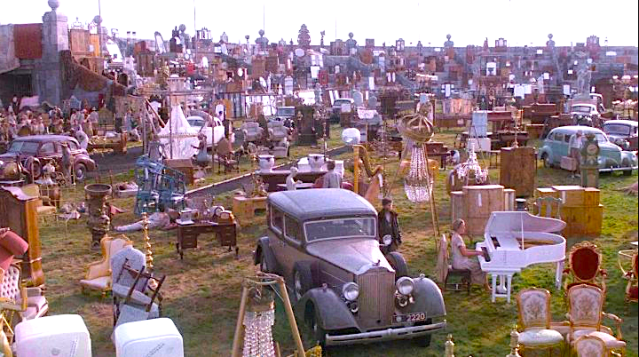 This blog was begun in 2009 as a feature of the Providence Journal, where I was on the editorial board and wrote a weekly column of architecture criticism for three decades. Architecture Here and There fights the style wars for classical architecture and against modern architecture, no holds barred. History Press asked me to write and in August 2017 published my first book, "Lost Providence." I am now writing my second book. My freelance writing on architecture and other topics addresses issues of design and culture locally and globally. I am a member of the board of the New England chapter of the Institute of Classical Architecture & Art, which bestowed an Arthur Ross Award on me in 2002. I work from Providence, R.I., where I live with my wife Victoria, my son Billy and our cat Gato. If you would like to employ my writing and editing to improve your work, please email me at my consultancy, dbrussat@gmail.com, or call 401.351.0457. Testimonial: "Your work is so wonderful - you now enter my mind and write what I would have written." - Nikos Salingaros, mathematician at the University of Texas, architectural theorist and author of many books.
View all posts by David Brussat →
This entry was posted in Architecture, Lost Providence and tagged Algonquin Club, Boston, Empire of the Sun, ICAA, Institute of Classical Architecture & Art, Lost Providence. Bookmark the permalink.

4 Responses to Empire of the Algonquin