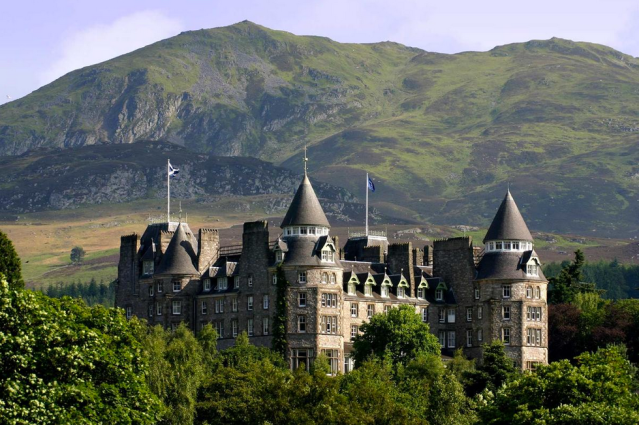 Here’s a passage from Three Sisters, Three Queens, Philippa Gregory’s historical novel set in Tudor England and, mainly, Scotland that unfolds – or unravels – as Henry VIII breaks with the pope over annulling his marriage to Katherine of Aragon to make way for Anne Boleyn. Here, as the book nears its conclusion, that has just happened. The dowager Queen Margaret and her son, Scotland’s 18-year-old King James V, are traveling with their retinue in the wild north of that country, then independent, in 1530.

“I did not know, for instance,” the [papal] ambassador begins in his careful French – then he breaks off for we have come out of a forest and into a meadow beside a wide, deep river and before us is a complete palace of wood, planted in the meadow like a dream house. It is an extraordinary sight, three stories high with a great turret at each corner, flags flying at each one, and even a gatehouse and a drawbridge that is a tree trunk. ”’

“What is this?” the ambassador asks me in bewilderment.

“This, says James, grandly, hiding his own surprise, “this is a summer palace that my loyal friend John Stewart [the Earl of Atholl] has prepared for us. Please come this way.” …

Inside it is more dreamlike than ever, for the ground floors are nothing but the meadow, richly planted with flowers. Upstairs there are bedrooms in each of the four corners of the palace, and each bed is built into the wall and planted with chamomile, like a scented bower, and thrown with furs. The great hall for dining is heated in the old way with a fire in the center, and the floor is beaten mud swept to perfect cleanness and polished with the passage of many feet. The high table is on a platform, a few carved wooden steps leading up to it, and the interior glows green with the light of the best wax candles.

I look around with delight. “Come and see your room,” the countess says and guides me up the wooden stairs to the chamber that overlooks the river and the hills beyond. Every wall is hung with a tapestry of silk, and every tapestry is a woodland or meadow or riverside scene so it is as if every wall is a window to the countryside beyond. The windows themselves are wooden-framed and made of perfectly clear Venetian glass so that I can look out at the river and see my horse grazing in the water meadows, or close the shutters for warmth.

We go down to dine. The fire is lit and the smell of woodsmoke mingles with the scent of roasted meat. They are cooking every sort of bird and three kinds of venison. … “This is truly very fine,” the ambassador says to me in an undertone. “Very unexpected. What a treasure house in the middle of nowhere. This Earl of Atholl must be very, very wealthy?”

The talk is of the situation in London, and of what Margaret would say to her sister-in-law, “Katherine of Arrogant,” who has failed to provide an heir to her (Margaret’s) brother, Henry VIII, the king of England. For three days, James and the ambassador hunt, fish and swim while Margaret looks out of the window. Then they depart.

As we ride away the papal ambassador looks back and exclaims “Mother of God!”

We all turn. Where the palace had been tall and turreted there are plumes of smoke from the greenwood and the crackle of fire. Little cracks of gunpowder going off under the walls tell us that the first has been set to destroy the summer palace. …

“We should go back! We could soak it from the moat!” the papal ambassador cries. “We could save it!”

James lifts a hand. “No, it has been fired on purpose. It is the tradition,” he says grandly. “It’s a great sight.”

“When a Highland chief gives a great feast he builds the dining hall and when the feast is done he burns everything, tables, chairs, and hall. It will never be used again: it was a singular experience.”

“But the tapestries? The silverwear?”

James shrugs, a king to his fingertips. “All gone. That is the beauty of Highland hospitality: it is total. We were guests of a great lord; he gave us everything. You are in a wealthy kingdom, a kingdom like a fairy tale.”

I think James is going a bit far, but the ambassador crosses himself as if he has just seen a miracle. “That was a mighty sight,” he says.

“My son is a great king,” I remind him. “This shows you the esteem of his people.”

I don’t doubt for a moment that the countess took down the tapestries and all the valuables. They probably took the windows out before they fired the wooden walls. But it is a great sight and it has done its work. The papal ambassador will go home to Rome and tell the Pope that … Scotland is a great country, it can ally with whom it chooses.”

In certain ways these passages, which are based on fact, make us wonder, with all the progress that has led to our day, whether we have advanced or regressed, at least in our architecture, and perhaps in other ways. These are the richest, noble families, yet today, despite recent losses on Wall Street, the stock market has added some $7 trillion to our nation’s wealth, almost half of the entire U.S. GDP ($18.5 trillion) of 2016, in just a year. Our economy and the world’s probably add something like the entire value of 16th century Europe every day. (Maybe I exaggerate – or perhaps understate the case.)

In any event, in comparative terms, James was the ruler of an impoverished land. With our profound wealth today, can we moderns not take a better stab at human settlement?

(I could not find a photo, of course, or even a painting or drawing of the wooden palace, so the Atholl Palace Hotel, built in 1878 as a homeopathic institute, will have to do. The Atholl earldom’s historic seat since 1457 was at Blair Castle, built circa 1269, see below, also near the town of Pitlochry.)

(My post “Q. of Scots takes Edinburgh” took several engaging passages from near the beginning of the book.)

This blog was begun in 2009 as a feature of the Providence Journal, where I was on the editorial board and wrote a weekly column of architecture criticism for three decades. Architecture Here and There fights the style wars for classical architecture and against modern architecture, no holds barred. History Press asked me to write and in August 2017 published my first book, "Lost Providence." I am now writing my second book. My freelance writing on architecture and other topics addresses issues of design and culture locally and globally. I am a member of the board of the New England chapter of the Institute of Classical Architecture & Art, which bestowed an Arthur Ross Award on me in 2002. I work from Providence, R.I., where I live with my wife Victoria, my son Billy and our cat Gato. If you would like to employ my writing and editing to improve your work, please email me at my consultancy, dbrussat@gmail.com, or call 401.351.0457. Testimonial: "Your work is so wonderful - you now enter my mind and write what I would have written." - Nikos Salingaros, mathematician at the University of Texas, architectural theorist and author of many books.
View all posts by David Brussat →
This entry was posted in Architecture, Uncategorized and tagged Earl of Atholl, Henry the Eighth, King James V of Scotland, Philippa Gregory, Scottish Tradition, Three Sisters Three Queens, Tudor England. Bookmark the permalink.