Even as a new apartment tower arises on Canal Street, another of similar size and design, just south of it along the eastern edge of the Providence River, faces a harder slog through the city’s development process. It may be too late to avoid further degrading the historical character of the old neighborhood known, in the 18th century, as Cheapside – the city’s first commercial district. But there remains an option, other than outright denial of permission to proceed, that could mitigate the damage.

According to the design documents, the portion of the new building facing North Main Street would be only three stories, designed to complement adjacent buildings. The main section, between the Congdon & Carpenter building and the Edge College Hill building now under construction, would be 7 stories and 15 stories. The larger height is proposed using the development rights from the historical building.

MacDonald’s diplomatic description does not hide the fact that this new building is trying to eat the more venerable structure, part of which dates back to 1790. The design of the main tower fits into the context only of its adjacent brother and predecessor, called Edge College Hill and now under construction. Each building has a slightly different version of the cheesy junkyard cacophony of fenestration common to recent cheap-o development. Their colors are dreadfully off-key for their neighborhood. North Main is the city’s oldest street and must not be purposely insulted.

Yet, it may be argued that when complete, the two new 15-story towers will not be so bad. They both fill asphalt parking lots. They may not totally sully the character of the neighborhood, or block cherished views any more than the 1990-vintage One Citizens Plaza tower’s 13 scary stories already do. The Citizens tower is known as the Darth Vader Building because it blocks the view, once open, to the State House from downriver. That’s all we need. More Darth Vader Buildings!

Taking a more forgiving tone, perhaps the developer of both new buildings, Vision Properties, of Conshohocken, Pa., should be applauded for letting the architect, DBVW, refrain from entirely stomping upon the history next door. The Congdon & Carpenter Building, owned by Capital Properties (which mismanaged the development of its own land in the nearby Capital Center district), is the city’s oldest industrial building and site of the 3 Steeple St. restaurant of yore, and, to this day, New Rivers restaurant. 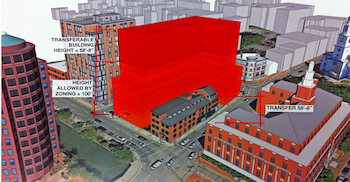 The design documents for the proposed new tower show 15 stories overshadowing the Congdon & Carpenter from behind, but stepping down from there to seven stories and then to only three stories facing North Main and Steeple, where it juts out to only partly block the lovely gabled east-facing façade of the C&C (where the appalling Andre the Giant/Buddy Cianci billboard used to be). The architecture of these lower reaches of the new building seems to suggest an effort to sympathize with the traditional style of the historic buildings in its vicinity. (See larger image below.)

But not good enough. The taller portions of the building add to the negative impact of the worst elements of the area’s development in recent decades, and the architects’ effort to fit into what remains of its historical setting might not be performed very well. It should look like a very high quality façadectomy – the word for putting a new building behind the façade of an old building. And, to top it off, it looks as if the view of the State House dome from the corner of Benefit and Angell streets might be entirely blocked.

Fortunately, it seems that the height and bulk of the building both depend upon a certain lawyerly s-t-r-e-t-c-h of air rights transferred from the C&C’s owner to the new tower’s developer. If suspicions raised by the Providence Preservation Society are correct, the developer hopes that city officials will “wink-wink” their attempt to flip the small floorplate of the old building into a right to build much larger floorplates stacked atop the larger building.

(Greater City Providence has a more detailed explanation of what the developer is up to in its story “15-story ‘Edge College Hill Two’ on Canal Street site,” by Jef Nickerson.)

If the city can stiffen its civic cojones, it should substitute its “wink-wink” with a stern tsk-tsk, directing the developer to return to the committee with a design that drastically diminishes the height of the tower and drastically sharpens the design of its three-story effort to fit in along North Main and Steeple. Part of that should be to step its building even farther back from Steeple to expose more of the east façade of the C&C.

Vision Properties has withdrawn its proposal. Let us hope that if it returns to start over with a re-do, it will respect not reject its historical context.

City officials have done a deplorable job protecting Providence’s primary competitive advantage over other cities, its historical character. Even they must recognize that this must end, and be turned around, or else Providence will be no more attractive than, say, Houston or Charlotte – except without the business friendliness of those two cities.

If we keep on keepin’ on, our beauty will disappear both slowly and suddenly – slowly enough that few will be alarmed, but suddenly enough that there will be no turning back once calamity reveals itself. How the city oversees this development on Canal Street will indicate whether it has the vision to save Providence from mediocrity. 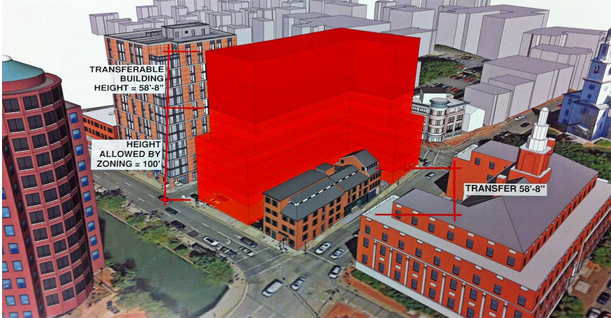 This blog was begun in 2009 as a feature of the Providence Journal, where I was on the editorial board and wrote a weekly column of architecture criticism for three decades. Architecture Here and There fights the style wars for classical architecture and against modern architecture, no holds barred. History Press asked me to write and in August 2017 published my first book, "Lost Providence." I am now writing my second book. My freelance writing on architecture and other topics addresses issues of design and culture locally and globally. I am a member of the board of the New England chapter of the Institute of Classical Architecture & Art, which bestowed an Arthur Ross Award on me in 2002. I work from Providence, R.I., where I live with my wife Victoria, my son Billy and our cat Gato. If you would like to employ my writing and editing to improve your work, please email me at my consultancy, dbrussat@gmail.com, or call 401.351.0457. Testimonial: "Your work is so wonderful - you now enter my mind and write what I would have written." - Nikos Salingaros, mathematician at the University of Texas, architectural theorist and author of many books.
View all posts by David Brussat →
This entry was posted in Architecture, Development, Preservation and tagged Canal Street, Capital Properties, College Hill, Darth Vader, DBVW, Downtown Design Review Committee, Providence Business News, Providence Preservation Society, Providence RI, Vision Properties. Bookmark the permalink.