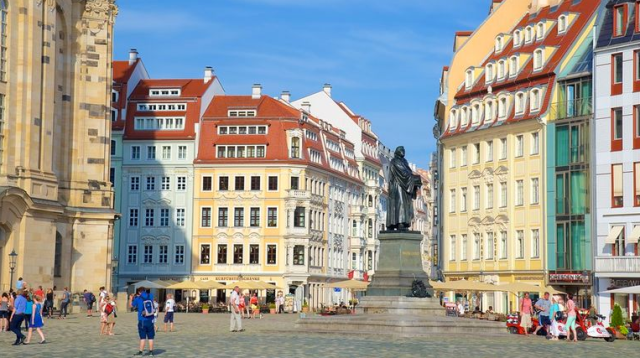 This year’s Reed goes to Torsten Kulke, who has led the reconstruction of Dresden’s Neumarkt, destroyed by Allied bombers in World War II and left vacant by the East Germans for half a century. Like the Breitmans – the 2018 Driehaus winners, who rebuilt a town outside of Paris (see yesterday’s post) – Kulke heads a project years in the making. His work in Dresden since 1999 has shepherded the revival of an area that surrounds one of history’s most remarkable civic reconstructions, the Frauenkirche – a separate, earlier Dresden project begun shortly after German reunification in 1989.

Here is a passage from the jury’s citation for the Henry Hope Reed award:

The reconstruction of the Historical Neumarkt at Dresden over the past two decades is an extraordinary achievement that has been met with astonishment and delight around the world. It is unique in Germany and indeed in the world in its ambition to resuscitate the lost historic heart of a city destroyed decades ago by war.

Torsten Kulke had the vision to see that Dresden could become a vibrant city once again, respectful of its own rich history, and he overcame significant political opposition to his plan.

Like the effort to reconstruct the church to its original design, rebuilding the church’s historic setting involved grappling with the German architectural establishment, which is as devoutly modernist as it is throughout Europe and America. The modernists claimed that rebuilding the Neumarkt would be inauthentic: only modern architecture can be appropriate in modern times. It is hogwash, of course, that any third grader can see through, yet it is powerful because modern architecture today is a global cult.

It is the work of people like Kulke in Dresden who, helming the Society for the Rebuilding of the Historical New Market Dresden for almost two decades, places before the public the idea that the loss of great and beautiful architecture need not be accepted as the final word. Nothing better makes the case for treating architecture as a phenomenon of place rather than time than the reconstruction of old places anew, and their subsequent integration as workable, lovable places into a broader community. The classical revival is based on the idea that a building’s essence is more in where it is than when it was built. The modernists want the public to believe, on the contrary, that beauty is a part of the past and should not be expected to be found in the present, let alone the future. This is wrong. It condemns millions to a lesser environment. I won’t say it is evil, but it certainly inhabits the dubious space between the immoral and the amoral.

To rebuild a lost and beloved building or place is, on the other hand, a commendable and entirely feasible effort to recoup the losses of our past. Likewise, to build anew in a style that reflects the traditions that arise out of our past to guide us into the future is a perfect example of the ways that citizens and entire industries can learn from history. Is this so difficult for our architecture establishment to understand? Of course not, which is why understanding is not the question. The answer is for Reed laureates to investigate.

In his remarks, Richard Driehaus added a key point:

Through private investment and careful project management, Torsten accomplished an extraordinary feat, and Dresden has become a model of redevelopment for cities and towns around the world.

Not the least such development is the possibility that the original Pennsylvania Station might be rebuilt, more than half a century after its demolition in 1963, to reflect the 1910 design by Charles Follen McKim of McKim Mead & White. If the Germans can do it in Dresden, Americans can do it in New York City. Learn more at Rebuild Penn Station.

Frauenkirche, completed earlier as a separate project in 2005. (trvl-media.com)

This blog was begun in 2009 as a feature of the Providence Journal, where I was on the editorial board and wrote a weekly column of architecture criticism for three decades. Architecture Here and There fights the style wars for classical architecture and against modern architecture, no holds barred. History Press asked me to write and in August 2017 published my first book, "Lost Providence." I am now writing my second book. My freelance writing on architecture and other topics addresses issues of design and culture locally and globally. I am a member of the board of the New England chapter of the Institute of Classical Architecture & Art, which bestowed an Arthur Ross Award on me in 2002. I work from Providence, R.I., where I live with my wife Victoria, my son Billy and our cat Gato. If you would like to employ my writing and editing to improve your work, please email me at my consultancy, dbrussat@gmail.com, or call 401.351.0457. Testimonial: "Your work is so wonderful - you now enter my mind and write what I would have written." - Nikos Salingaros, mathematician at the University of Texas, architectural theorist and author of many books.
View all posts by David Brussat →
This entry was posted in Architecture and tagged Dresden, Driehaus Awards, Frauenkirche, Henry Hope Reed, Henry Hope Reed Award, Neumarkt Dresden, New Market Dresden, Richard H. Driehaus, Torsten Kulke. Bookmark the permalink.