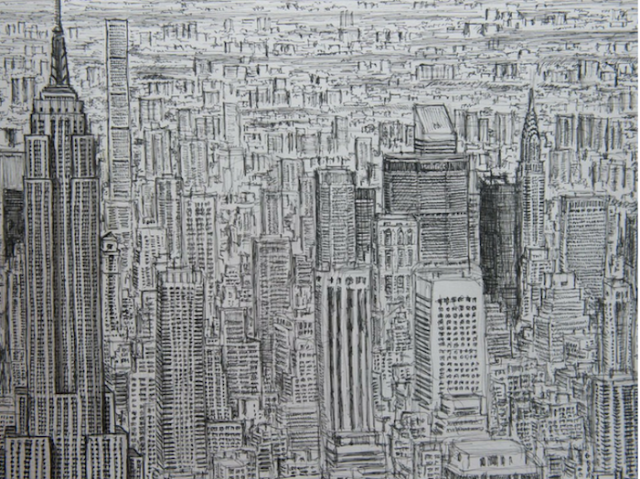 Stephen Wiltshire’s remarkable ability to draw a city from memory came to my attention several years ago in a segment on 60 Minutes or some such show. A British citizen, he was diagnosed with autism at age 3, but his talent became apparent as a student at a special school in London. I just came across this article about Wiltshire in the article “British Artist Draws NYC Skyline From Memory,” on the Untapped Cities blog. It links to Wiltshire’s own blog, where his drawings of many other cities can be viewed.

Wiltshire took a 45 minute helicopter ride over the city, and then spent the next five days creating an incredibly detailed, and unbelievably accurate drawing of the entire skyline, in front of an audience. Wiltshire’s drawing isn’t just of the skyline though – individual windows on buildings are depicted, as are smaller buildings only visible through the gaps between other buildings.

After his 45 minutes aloft, how did he manage to keep his memories of Manhattan as seen from one angle separate from his memories of the city from other angles? And in front of an audience, no less! OMG! His ability to capture the essence of a skyline achieves a transcendence of drawing and photography mixed. Too bad we can’t send Wiltshire, who is 43, back in a time machine to New York and other cities long ago!

What a shame that someone, say, Samuel Pepys, never encountered such a talent in his peregrinations about the city of London. The Italian artist Canaletto, famous for his paintings of Venice, painted London as well. He came, he saw, he drew – but I imagine he did not draw from memory. The scene below was no doubt drawn on an easel while the artist stood and looked – and probably had to go out there and stand for days on end. Did he work it all the way through, or did he draw it first then fill in the colors back in his studio? Thankfully, buildings are great sitters. They do not move much at all while you are taking their portrait. The sun may move shadows as the day transpires, but maybe that’s not much of a problem in London. Nor does architecture distract the artist with idle chit-chat, for which the artist may or may not be thankful.

I wish some local opportunist would try to get Wiltshire to draw Providence. Put it up in the Industrial Trust Building. His drawing of New York City is scheduled to be installed, temporarily, inside the observation deck of the Empire State Building. I can’t wait to see it.

Thames waterfront in London, with St. Paul’s and many steeples in the distance. (Georgian Cities) 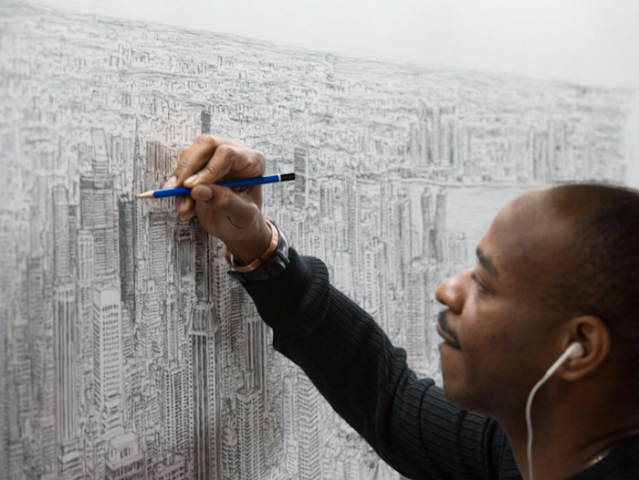 This blog was begun in 2009 as a feature of the Providence Journal, where I was on the editorial board and wrote a weekly column of architecture criticism for three decades. Architecture Here and There fights the style wars for classical architecture and against modern architecture, no holds barred. History Press asked me to write and in August 2017 published my first book, "Lost Providence." I am now writing my second book. My freelance writing on architecture and other topics addresses issues of design and culture locally and globally. I am a member of the board of the New England chapter of the Institute of Classical Architecture & Art, which bestowed an Arthur Ross Award on me in 2002. I work from Providence, R.I., where I live with my wife Victoria, my son Billy and our cat Gato. If you would like to employ my writing and editing to improve your work, please email me at my consultancy, dbrussat@gmail.com, or call 401.351.0457. Testimonial: "Your work is so wonderful - you now enter my mind and write what I would have written." - Nikos Salingaros, mathematician at the University of Texas, architectural theorist and author of many books.
View all posts by David Brussat →
This entry was posted in Architecture, Art and design and tagged Architectural Drawing, Autism, Canaletto, Cities, Drawing, Manhattan, New York City, Pepys, Stephen Wiltshire. Bookmark the permalink.

1 Response to NYC, drawn from memory