Reading E.B. White’s 1945 masterpiece, Stuart Little, to my little boy, Billy, at bedtime brought the illustration above to my attention last night for the first time in, um, shall we say, several decades. The artist, Garth Williams, drew the townhouses before modern architecture had degraded so much of Manhattan. Here you see the sweet bird Margalo flying Stuart back home (see them in the clouds) after rescuing him from a garbage scow in the East River, where he accidentally found himself. The night before, Stuart had rescued Margalo, a guest in the Littles’ apartment, from the cat Snowbell. (It seems that the mouse had fallen in love with the bird.)

While I was at the Providence Journal one of my chores was to design the edit and oped pages several times a week, and I often ran opeds chosen so I could run favorite images with them. One of these, to the left, was of an urban aerie, a little domicile atop a tall building, doubtless in Manhattan. Such a place may be found frequently atop buildings in reality today. Mostly they are known as penthouses, but this one had a more humble appeal.

There may be nothing like it in Providence, but not so distant is my old loft, facing to the east from the fifth floor of the Smith Building. The building is pictured to the left of City Hall in the photo just below, taken on a festive holiday in, I would guess from the cars, the late 1950s. Luke’s Chinese-American Restaurant was long gone before I moved in. Pictured below that photo is the view looking east up Fulton between City Hall and the old Journal Building from my loft, where I was joined by Victoria in 2007 and Billy in 2009. In 1999, I chose to occupy the fifth-floor unit instead of the seventh-floor top unit because it was more affordable but had two enchanting cornices framing my view right at eye level, which to me was preferable to a longer view marred by rooftop HVAC machinery. This was my aerie, and I miss it dearly!

Finally, at bottom, is Garth Williams’s sketch of Stuart shooting Snowbell in the ear as the cat stalked the sleeping bird the night before the adventure of the garbage scow. She was watching him from the window the morning after and, when he was “kidnapped” by a garbage truck, followed him. (She may have felt her heart throb, too, for the little mouse.) The open window near the potted plant, from which Margalo flew, might be the same window that’s open in the view from outside in the sketch atop this post – except that the window on top has ten panes while the one below has eight. Hmm. But we’ll overlook that for now, and pray that readers will hurry up and send examples for the blog post “Best traditional buildings of 2017,” for which this post serves as a placekeeper. 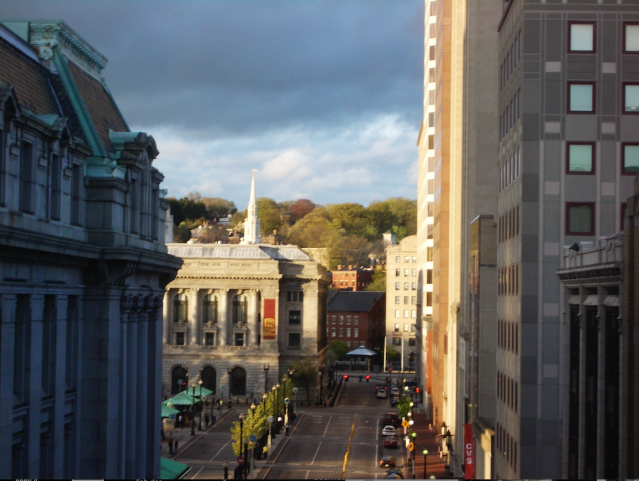 This blog was begun in 2009 as a feature of the Providence Journal, where I was on the editorial board and wrote a weekly column of architecture criticism for three decades. Architecture Here and There fights the style wars for classical architecture and against modern architecture, no holds barred. History Press asked me to write and in August 2017 published my first book, "Lost Providence." I am now writing my second book. My freelance writing on architecture and other topics addresses issues of design and culture locally and globally. I am a member of the board of the New England chapter of the Institute of Classical Architecture & Art, which bestowed an Arthur Ross Award on me in 2002. I work from Providence, R.I., where I live with my wife Victoria, my son Billy and our cat Gato. If you would like to employ my writing and editing to improve your work, please email me at my consultancy, dbrussat@gmail.com, or call 401.351.0457. Testimonial: "Your work is so wonderful - you now enter my mind and write what I would have written." - Nikos Salingaros, mathematician at the University of Texas, architectural theorist and author of many books.
View all posts by David Brussat →
This entry was posted in Architecture and tagged Aprtment Buildings, E.B. White, Garth Williams, Manhattan, New York City, Penthouses, Providence RI, Smith Building, Stuart Little. Bookmark the permalink.