Trad and not so trad 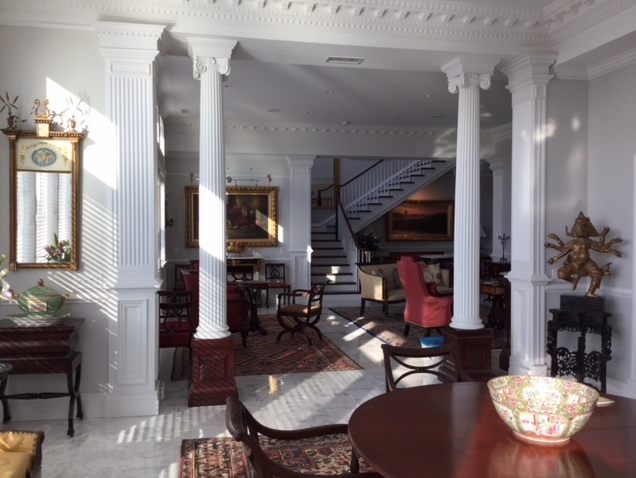 The interior detailing criticized by Anthony James in his comment below.

An architectural designer with a background in preservation and traditional design, who asked to be posted anonymously, joins a host of commenters criticizing my praise for Stan Weiss’s interior design. They include Eric Daum, Seth Joseph Weine, Nikos Salingaros, Patrick Webb, others who have chastised me in private emails, and Anthony James, who sent in the original critique of this bad trad. Their warnings, aside from having a persuasive power born of the passion of their eloquence, are, I think, valid in almost every regard.

My two posts that have sparked this discussion are “Stan Weiss’s house divided” and “Behold the classical disorders.”

I am going to post the anonymous comment in full because it is the most comprehensive, and also because it makes, toward its end, the one major point upon which I disagree. He (along with Seth Weine) has made the point specifically whereas others make it, I think, by implication. What I would like to assert is a broader issue, voiced here many times, within which both the call for higher standards and the tolerance of lesser work can live, and, in my view, must live if classicism is to thrive in the future.

But I am busy today – ’tis the season and all that – so I will print the anonymous comment and wait until tomorrow to address his ideas and the question of bad trad. But before printing that comment I will reproduce Anthony James’s original email, which he sent to me privately, no doubt out of kindness. Since I have dragged him into this debate, he deserves to have his words posted in full. Here, first, is his comment, then that of Anonymous.

Well, the exterior is very peculiar, to be sure.  It basically thumbs its nose to the street, and says “I’m a box, but make no mistake, an elegant, private box, but a box none the less”.

On the interior the thing that bugs me the most is the treatment of the pilasters: the “capital” just looks clumsy, and the surface-applied molding making a panel (at pilaster pedestal) is just cheap looking.  There is no real base to the pilasters (no real capital either), then the relationship of pilaster to free-standing column [see photo above] is totally awkward, as is the relation of the columns to the beam above, and the proportional relationship between columns and pilasters to pedestals. Some pilasters have lower pedestals, too, where they apparently aren’t trying to relate to a chair rail. The columns are too skinny to relate properly to the pilasters and the width of the beam above. The various entablatures are all screwy and don’t match each other from room to room, or even from one side of a room to another.  The entablature is missing its architrave, and in general is over-sized for the space. The chair rail, on the other hand, is too small for the space, and especially in relation to the chunkiness of the other elements. The trim of the window in the stair is totally weird and ugly.  The paneled frieze (again with applied moldings making up the panel) projecting over the trim is totally awkward and dumb looking.

It is obvious that whoever designed the interior trim scheme knows nothing about classical architecture and picked a batch of moldings from catalogs and put them together as best they could.  But a sorry mish-mash it is.
.
Anthony James

David, the problem isn’t that the house you’ve presented misses a few of the finer points of some arcane and fixed orthodoxy. The problem is that what you’re praising misses the underlying principles of Classical and traditional architecture – which, when understood and engaged, bring harmony to work that eschews overt Orders but achieves order. The work you’re presenting grabs random words and phrases, but jumbles them into total disorder, saying nothing.

There is an immense and incredibly rich potential for variation, playfulness, innovation and evolution within the Classical-traditional spectra of the world because they all have at their core qualities that transcend the particulars of any one detail. Modernists vociferously assume traditional architecture is unthinking, formulaic reproduction (“pastiche,” “kitsch”) on the part of all contemporary traditional designers. They argue this not simply because they don’t believe in (read: understand) the various details of traditional architecture; but more significantly because they can’t conceive of architecture as an evolving language, capable of marrying time-tested principles with constant contextual sensitivity and innovation to the particular problems at hand. They eschew standards of judgment, and pretend this is the same as the liberal, progressive, humanist ideals of the post-Enlightenment era. This is why they have generally proposed the virtually identical “new” solutions wherever and whenever they are for the last 80 years: they don’t have principles girding their aesthetics, they don’t have a supple and nuanced language, and so they just repeat the same thing with superficial variation, going in viscous and vacuous circles and proving that repetition does not inherently generate a tradition. We traditionalists have to do more than the same superficial repetition.

Those of us who work from a traditional basis always draw on the principles and language of our traditions – even when doing work that features nary an architrave, a dentil, an egg-and-dart, a modillion. Modernists, conversely, don’t see the Order for the taenia, as it were: when they’re forced to imitate traditional and “Classical” work because of market demands, they look at tradition and in a funny inversion of Corbusier, “have eyes that do not see” beyond the surface. They take in abstractly and then generate at random a piling up of meaningless details that act as post-modern signifiers. They do not create a coherent whole. Even those who mean well, if they refuse to look and see the underlying intent, will create a muddle, not the type of purposeful “discontinuities” we all love (from the Mannerist to the Art Nouveau to the simple vernacular cottage). Successful discontinuities – which I would call diversification and evolution – rise from a rich understanding of the “norm” from which designers and builders diverge selectively and purposefully.

I understand that your approach to defending traditionalism and Classicism wants to be populist, making the seemingly reasonable and friendly claim that beauty is simply in the eye of the beholder, fearful that if we press for anything more careful we’ll be viewed as bow tie-wearing fuddy-duddies. But if you look at buildings built before Modernism’s coup, in all of them – from the simplest 1770s house on Transit Street to the most ornate 1910s mansion in College Hill to the 1890s Fox Point workforce housing to the City Hall to the Deco storefronts downtown – you see they achieve incredible variety, but that none of them makes any of the mistakes of proportion, tectonic clarity, hierarchy, etc., that are rampant in the house you’ve extolled. Getting the fundamentals “right” is hardly at odds with “making architecture the average person likes,” as, when the languages of tradition were integrated into the design and building trades, all buildings had a basic dignity. (Look at the Sears Roebuck homes catalogs: literally mass-market, as popular and “common man” as could be, and yet all with a grace and clarity lacking in the much “fancier” home you’ve featured). People deprived of all food will eat anything you give them; that doesn’t mean they don’t deserve, and wouldn’t appreciate, wholesome, nutritional and tasty food.

The more that well-meaning traditionalists defend bad-trad architecture that treats tradition as just another shallow stylistic grab-bag, the less of a real argument we have against the cruelties and follies of Modernist architecture, because we play into their approach of making everything a matter of “style,” of “preference,” nothing to do with real – which is to say, lasting and adaptable – beauty and function. We have so much more than “style” going for us, but not if we accept anything with doodads and gewgaws applied to speak for “tradition.” As a passionate and often eloquent defender of preservation, and as someone who – even more rare – has made the leap to the fact that what we would preserve materially can also teach us how to build today: it behooves you to educate yourself more to the language of tradition, about its core principles and sensibilities and goals, not just its superficial results. You have nothing to fear – you won’t become a purist stereotype, a snob out of touch with “the common man.” You’ll just be able to make the arguments you make for humane buildings and places even better, standing on terra firma. We do what we do rooted in achievements that have transcended and outlasted all vagaries of fashion and taste and politics, that has produced millennia of humane buildings and places. Knowing where it comes from, what makes it successful, and calling for higher standards can only help our efforts.

Closer look from upper right corner of photo of detailing criticized above.

This blog was begun in 2009 as a feature of the Providence Journal, where I was on the editorial board and wrote a weekly column of architecture criticism for three decades. Architecture Here and There fights the style wars for classical architecture and against modern architecture, no holds barred. History Press asked me to write and in August 2017 published my first book, "Lost Providence." I am now writing my second book. My freelance writing on architecture and other topics addresses issues of design and culture locally and globally. I am a member of the board of the New England chapter of the Institute of Classical Architecture & Art, which bestowed an Arthur Ross Award on me in 2002. I work from Providence, R.I., where I live with my wife Victoria, my son Billy and our cat Gato. If you would like to employ my writing and editing to improve your work, please email me at my consultancy, dbrussat@gmail.com, or call 401.351.0457. Testimonial: "Your work is so wonderful - you now enter my mind and write what I would have written." - Nikos Salingaros, mathematician at the University of Texas, architectural theorist and author of many books.
View all posts by David Brussat →
This entry was posted in Architecture, Uncategorized and tagged Anthony James, Architectural Language, Bad Trad, classical architecture, Classical Orders, Kitsch, Pastiche, Tradition. Bookmark the permalink.

2 Responses to Trad and not so trad