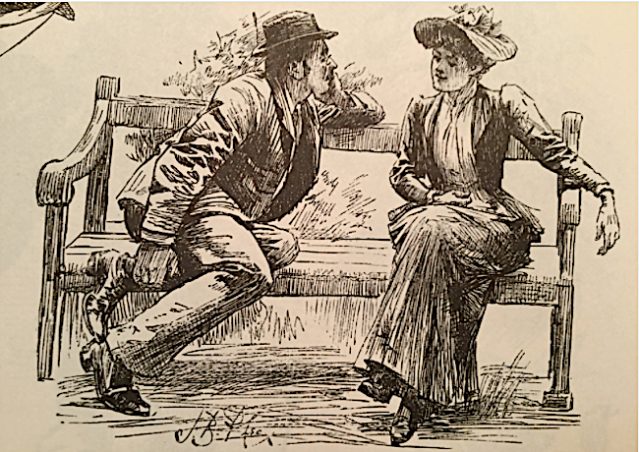 The progression from flirtation to seduction may be comparable to the progression between the stages of embellishment in architecture. The parallel may be drawn from an article by the Associated Press on how the French are reacting to the sexual harassment crisis here. In “France wrestles with the line between seduction, harassment,” Thomas Adamson describes the concern of some in France that overreaction might end up “throwing out its Don Juan national identity”:

“France is a country of men who love women,” Guillaume Bigot, who has written about the [Harvey] Weinstein fallout in France, told the Associated Press. “Seduction is a profound part of our national identity … the culture of the ‘French lover’ and the ‘French kiss’ is in danger because of political correctness.”

Leaving aside the dissolution of French culture, citizens in both countries can be forgiven for worrying that flirtation might someday disappear from the workplace. The transitions from yearning to fantasy to the exchange of glances to innocent touching and beyond in shops and offices across the land resemble, in certain ways, the transitions of embellishment in a building façade from the barely articulated base to the gentle stringcourse to the bolder treatments of the architrave upholding the cornice line beneath the edge of the roof.

The gentle and principled embellishments of traditional architecture resemble the modest and controlled gradations of civilized behavior.

Of course, progressions of behavior and of embellishment can both spin out of control. In the workplace the exchange of glances can lead to aggressive touching or worse. In architecture, society long ago stumbled past the gentle embellishments of tradition to the rejection of embellishment altogether by modern architecture, with its discomforting angularity, passive-aggressive sterility, vertigo-inducing gigantism of mass and its rejection of human scale, not to mention its thumbing its nose at the laws of nature.

Sexual assault and modern architecture both reject the idea that no means no. The abuse of authority over victims of sexual aggression in the workplace stretches back a long time, but so has the abuse of the built environment by modern architecture. Architects have known very well since the outset of modernism in the 1920s and ’30s that the public dislikes it by very wide margins. Like the smirk of a boss who has got away with victimizing his secretary, the modern architect treats the public’s dislike of his work as a feather in his cap.

On one side of this comparison, bad behavior is finally being confronted. On the other side, not so much.

Has this comparison itself spun out of control? Maybe. Or maybe not.

This blog was begun in 2009 as a feature of the Providence Journal, where I was on the editorial board and wrote a weekly column of architecture criticism for three decades. Architecture Here and There fights the style wars for classical architecture and against modern architecture, no holds barred. History Press asked me to write and in August 2017 published my first book, "Lost Providence." I am now writing my second book. My freelance writing on architecture and other topics addresses issues of design and culture locally and globally. I am a member of the board of the New England chapter of the Institute of Classical Architecture & Art, which bestowed an Arthur Ross Award on me in 2002. I work from Providence, R.I., where I live with my wife Victoria, my son Billy and our cat Gato. If you would like to employ my writing and editing to improve your work, please email me at my consultancy, dbrussat@gmail.com, or call 401.351.0457. Testimonial: "Your work is so wonderful - you now enter my mind and write what I would have written." - Nikos Salingaros, mathematician at the University of Texas, architectural theorist and author of many books.
View all posts by David Brussat →
This entry was posted in Architecture and tagged Associated Press, Don Juan, Flirtation, France, Harvey Weinstein, Modern Architecture, Sexual Assault, Thomas Adamson, traditional architecture. Bookmark the permalink.

1 Response to Flirtation and architecture