Last week I attended a party on Tide Street in South Boston, part of the Hub’s Innovation District. The party was fun, but please let me convey my experience of the district’s urbanism as a warning to Providence, which seems to want to reproduce it, albeit writ small, along the Route 195 corridor in what our city and state hope will become its own innovation district.

I left the party around 7:30 after phoning for a cab, and waited for the cab next to Tide Street, near Drydock 3. The street was long, wide, straight and empty. After 20 minutes the cab had not come. It was getting dark. I called the dispatcher, who said the cab would be right there. Another 20 minutes and I set out for Northern Avenue, some 300 yards off, an extension, even longer and wider than Tide, of the district’s main drag, Seaport Boulevard. Still, almost no cars. Reaching Northern, I crossed to a mammoth industrial facility, built in 1918 by the U.S. War Department, now the Innovation & Design Building. (Its western end is anchored by the Boston Design Center, where the New England chapter of the Institute of Classical Architecture & Art now meets.) No cars, no people. I tried to find where to go in. But before reaching it, I finally saw and flagged down a cab. As if we were back in Rhode Island, with its 1½ degrees of separation, the cabbie had been looking for me for at least half an hour, and kindly took me to South Station.

This sort of thing can happen anywhere, of course. The point is that the environment was way out of human scale, with nothing nice to look at. It was lonely out there and I felt like a small rodent. I was grateful it was dark, for, although there are lovely old blocks on the way into the district along Congress Street, out here and in much of the district, night graciously cloaks buildings that by day make some of us wish we were blind. All was emptiness and sterility, nothing intimate or comforting to the eye. The level of street activity, pedestrian or motorized, makes Westminster Street seem as bustling as Fifth Avenue. The architecture of Boston’s Innovation District makes our Jefferson Boulevard seem as lovely as London’s Regent Street.

Now Providence and Rhode Island are building their own innovation district. There is no law that our district’s appearance cannot be inspired by the brick mill architecture that housed the Jewelry District when its innovators led global industry in some fields. Or some other style that strengthens our beauty and historical character. But there is a law – the Providence Zoning Code – that says new architecture in downtown (which the 195 corridor now is, officially) must be “compatible with the existing historic building fabric and the historic character of downtown.” (See “Battle of the 195 riverfront.”)

This is a really easy decision. Let’s not muff it, please. A very robust Boston can afford to stink up part of the city. Providence cannot.

By the way, the principles involved apply equally to Providence’s Amazon pitch. 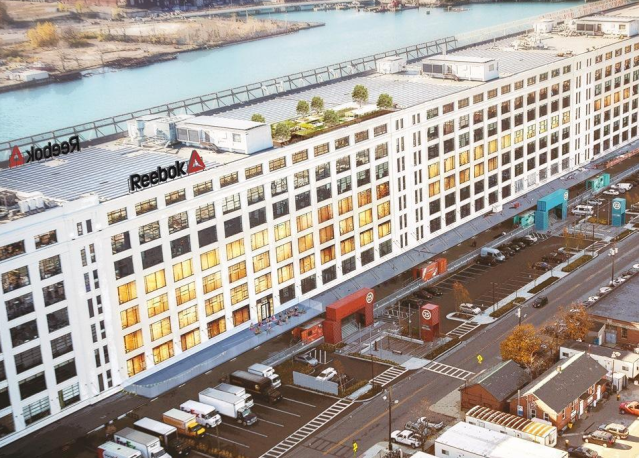 About a third of the length of the Innovation & Design Building, into which a new Reebok headquarters is moving this fall. (Boston Business Journal)

This blog was begun in 2009 as a feature of the Providence Journal, where I was on the editorial board and wrote a weekly column of architecture criticism for three decades. Architecture Here and There fights the style wars for classical architecture and against modern architecture, no holds barred. History Press asked me to write and in August 2017 published my first book, "Lost Providence." I am now writing my second book. My freelance writing on architecture and other topics addresses issues of design and culture locally and globally. I am a member of the board of the New England chapter of the Institute of Classical Architecture & Art, which bestowed an Arthur Ross Award on me in 2002. I work from Providence, R.I., where I live with my wife Victoria, my son Billy and our cat Gato. If you would like to employ my writing and editing to improve your work, please email me at my consultancy, dbrussat@gmail.com, or call 401.351.0457. Testimonial: "Your work is so wonderful - you now enter my mind and write what I would have written." - Nikos Salingaros, mathematician at the University of Texas, architectural theorist and author of many books.
View all posts by David Brussat →
This entry was posted in Architecture, Development and tagged Boston, Boston Design Center, Boston Innovation District, I-195 Corridor, Innovation and Design Building, Innovation Districts, Providence Innovation District, Providence RI, Providence Zoning Code, Tide Street. Bookmark the permalink.