“This is a rear view of the Shepley Library at 292 Benefit Street. [Historian] Margaret Stillwell … recalls that just beyond the John Brown House stood a ‘little building put up by Colonel George Shepley to house his collection of Rhode Island books, prints, and manuscripts'” (Providence’s Benefit Street)

Lost Providence ought to have included the Shepley Library, formerly on the grounds of the John Brown House between Charlesfield and Power on Benefit Street. It appears to have been built just before or just after the turn of the 19th century. I was unaware of its existence until after I wrote my book, when I purchased Providence’s Benefit Street, by Elyssa Tardif and Peggy Chang. When their book was published in 2013 by my own publisher, History Press, Tardif was on staff at the Rhode Island Historical Society, at whose Brown House Museum I’ll be speaking on Thursday evening.

The revelation that such a library existed raises numerous questions. When was it built? When was it lost? Was another house demolished to make way for the library? The caption to another shot of the library reads: “The image below, undated, shows the front of the Shepley Library at 292 Benefit Street.” 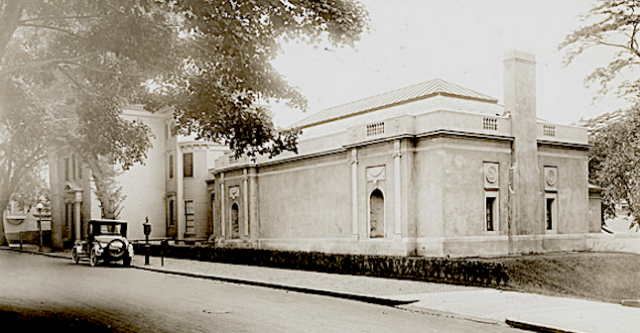 The database text for the same image in the online archive of the Providence Public Library reads: “Image shows the Shepley Library on Benefit Street. The library appears to be an addition built onto the Shepley House. A car is parked outside the library. Library no longer stands” The detail below of my 1895 plat map of the southern portion of College Hill and Fox Point shows a house at the sharp corner of the block that may be the library, with the Shepley House (the colonel’s residence) just above it along Charlesfield. If so, and if the front is indeed on Benefit, then it is hard to tell how the Shepley House fits to its left in the photo above.

Of course, the map or the book may be wrong, or I may be incorrect in my belief that the map is from 1895. If so, the footprint that looks like it may be the Shepley Library might also be a house that could have been razed to build the library. Or maybe it is the library but the mapmakers got the footprint wrong, or maybe the library underwent renovations that changed the shape of its footprint.

Other buildings that I perhaps ought to have included in Lost Providence include the city’s first train station, designed by Thomas Tefft, from 1848, and the Hospital Trust Bank Building, completed in 1891. The lifespan and location of each are considerably less indeterminate than those of the Shepley Library. No doubt also my investigation into the library represents a regrettably limited effort of sleuthery by the author of Lost Providence. I hope someone will provide additional (and more reliable) information – perhaps during my evening at the John Brown House on Thursday. I look forward to writing a more satisfying addendum to this report.

[The day after uploading this post I published “Shepley Library addendum,” which updates readers on the former library’s actual location.]

This blog was begun in 2009 as a feature of the Providence Journal, where I was on the editorial board and wrote a weekly column of architecture criticism for three decades. Architecture Here and There fights the style wars for classical architecture and against modern architecture, no holds barred. History Press asked me to write and in August 2017 published my first book, "Lost Providence." I am now writing my second book. My freelance writing on architecture and other topics addresses issues of design and culture locally and globally. I am a member of the board of the New England chapter of the Institute of Classical Architecture & Art, which bestowed an Arthur Ross Award on me in 2002. I work from Providence, R.I., where I live with my wife Victoria, my son Billy and our cat Gato. If you would like to employ my writing and editing to improve your work, please email me at my consultancy, dbrussat@gmail.com, or call 401.351.0457. Testimonial: "Your work is so wonderful - you now enter my mind and write what I would have written." - Nikos Salingaros, mathematician at the University of Texas, architectural theorist and author of many books.
View all posts by David Brussat →
This entry was posted in Architecture, Lost Providence and tagged John Brown House, Providence RI, Providence's Benefit Street, Rhode Island Historical Society, Shepley Library. Bookmark the permalink.

6 Responses to Shepley Library on Benefit?