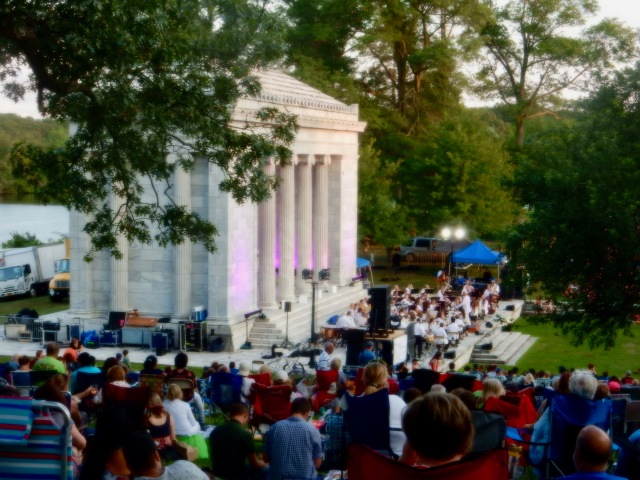 The Temple to Music at Roger Williams Park, in Providence. (Photos by David Brussat)

We attended a pops concert of the Rhode Island Philharmonic Orchestra on Friday evening, a free event sponsored by the Rhode Island Foundation and held at the Temple to Music, on the grounds of Roger Williams Park. … Ah! Rhode Island!

Anyhow, the program included, as a finale, Tchaikovsky’s “1812 Overture,” a favorite of mine, which has been absent for a couple of years, alas, from the program of the Fourth of July celebration hosted by the city of Providence at India Point Park. A second of two Sousa marches served, by way of encore, to reward the crowd for its fine taste.

The park was mobbed, and we ended up after the intermission down in the children’s dancing semicircle just before the stage within the temple. It was a great place to sit on a blanket, joined by our friends Dan, Shoko and Caroline (who is Billy’s age). The kids did not dance but paid close attention to Billy’s computer games, undeterred by beautiful music or beautiful scenery. Dad lay back, closing his eyes, listening to the music through a gentle din. Ah, such bliss! I sat up every few moments to gaze upon, and photograph, the Temple to Music, which changed colors with every new item on the program, which was conducted by Francisco Noya.

The Temple to Music was erected in 1924 to the design of architect William T. Aldrich, who also designed the RISD Museum of Art in 1926 – the real one, on Benefit Street – and, of recent note, the Bodell House on Balton Road, upon whose land five new houses are arising. The Bodell survives in spite of the subdivision of its grounds.

So last night the temple was lit in a succession of hues, which follow in order. The shots show the temple under the influence of bold or subtle coloration and falling darkness. The cloudy backdrop seen through the temple provided a mildly brooding ambiance on this fine evening. This may best be seen in the concluding video of the Philharmonic playing (I think) a bit from the Batman movie overture, or something like that. It was delicious, as was the entire evening, in spite of massive traffic jams, parking strategy dilemmas and the unaccountably successful trek back to the car (I found it and returned to retrieve Billy and Victoria. 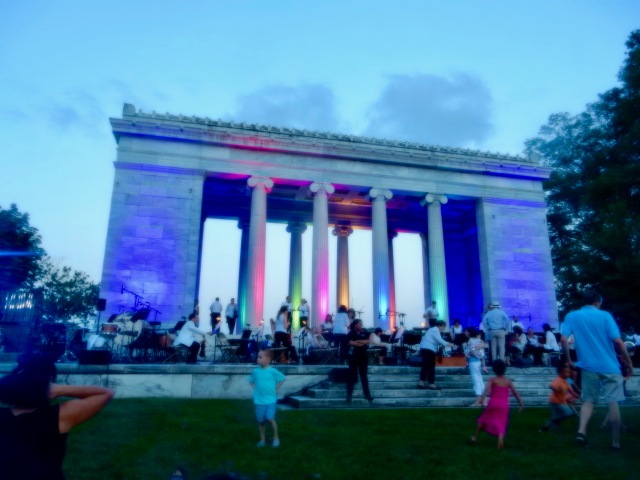 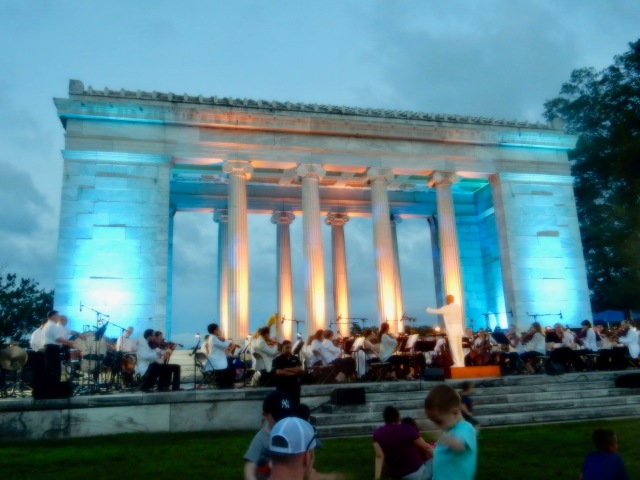 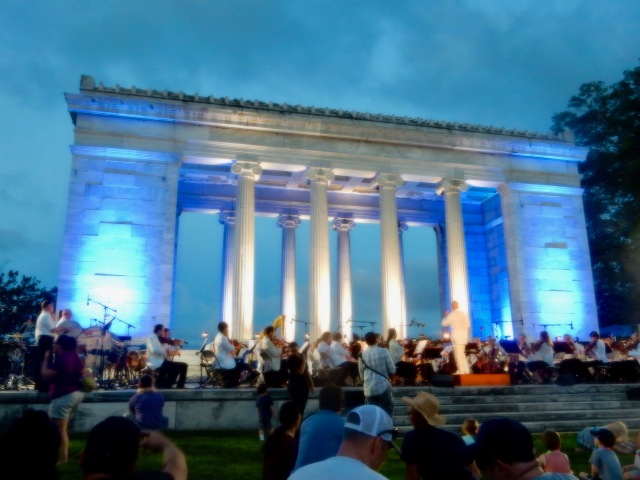 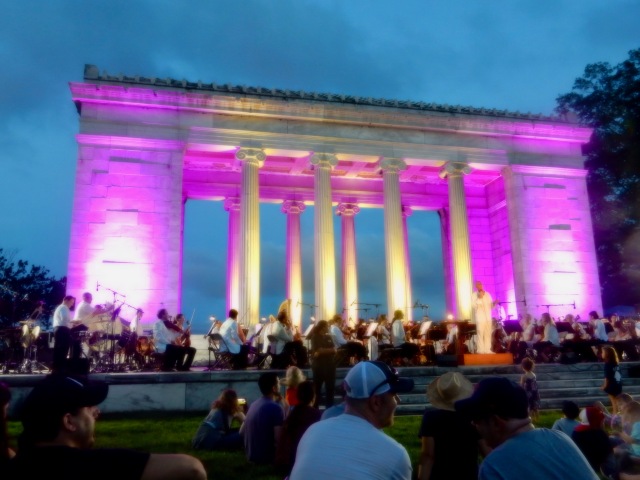 This blog was begun in 2009 as a feature of the Providence Journal, where I was on the editorial board and wrote a weekly column of architecture criticism for three decades. Architecture Here and There fights the style wars for classical architecture and against modern architecture, no holds barred. History Press asked me to write and in August 2017 published my first book, "Lost Providence." I am now writing my second book. My freelance writing on architecture and other topics addresses issues of design and culture locally and globally. I am a member of the board of the New England chapter of the Institute of Classical Architecture & Art, which bestowed an Arthur Ross Award on me in 2002. I work from Providence, R.I., where I live with my wife Victoria, my son Billy and our cat Gato. If you would like to employ my writing and editing to improve your work, please email me at my consultancy, dbrussat@gmail.com, or call 401.351.0457. Testimonial: "Your work is so wonderful - you now enter my mind and write what I would have written." - Nikos Salingaros, mathematician at the University of Texas, architectural theorist and author of many books.
View all posts by David Brussat →
This entry was posted in Architecture, Art and design, Video and tagged 1812 Overture, Francisco Noya, John Philip Sousa, Rhode Island Foundation, Rhode Island Philharmonic Orchestra, Roger Williams Park, Temple to Music, William T. Aldrich. Bookmark the permalink.