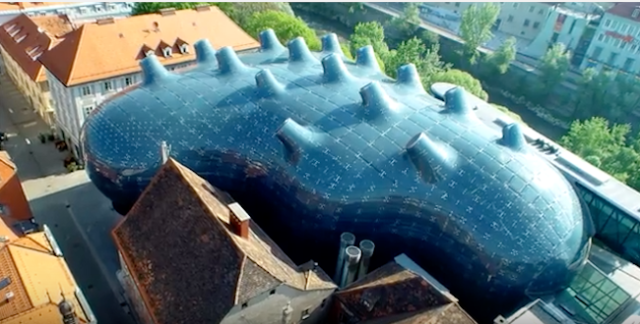 Paul Joseph Watson has every reason to be angry, and so have we all if what he says is true, and every word is true. One need not accept his verdict on modern art in order to accept his verdict on modern architecture. His discourse thankfully includes clips from such generally less pottymouthed thinkers as Prince Charles, Roger Scruton and James Howard Kunstler. (Coincidentally, the latter two blurbed my new book Lost Providence.)

The video is up to date, with a brief segment on the latest modernist abomination, the Grenfell tower fire in London. But while he mentions the totalitarian Le Corbusier, he leaves out Ludwig Mies van der Rohe, who tried to persuade Hitler that modern architecture was an appropriate stylistic template for the Third Reich. Architects never try to explain that away, they just ignore it. The photo above is a plug-ugly I had never seen before, the Grazer Kunsthaus art museum in Graz, Austria.

Toward the end of the video, Watson expresses this overarching truth about our era: “In an age of ugliness, a work of beauty is an act of defiance.” He concludes, “We must never accept ugliness as a form of beauty.” Enjoy.

This blog was begun in 2009 as a feature of the Providence Journal, where I was on the editorial board and wrote a weekly column of architecture criticism for three decades. Architecture Here and There fights the style wars for classical architecture and against modern architecture, no holds barred. History Press asked me to write and in August 2017 published my first book, "Lost Providence." I am now writing my second book. My freelance writing on architecture and other topics addresses issues of design and culture locally and globally. I am a member of the board of the New England chapter of the Institute of Classical Architecture & Art, which bestowed an Arthur Ross Award on me in 2002. I work from Providence, R.I., where I live with my wife Victoria, my son Billy and our cat Gato. If you would like to employ my writing and editing to improve your work, please email me at my consultancy, dbrussat@gmail.com, or call 401.351.0457. Testimonial: "Your work is so wonderful - you now enter my mind and write what I would have written." - Nikos Salingaros, mathematician at the University of Texas, architectural theorist and author of many books.
View all posts by David Brussat →
This entry was posted in Architecture, Video and tagged James Howard Kunstler, Le Corbusier, Mies van der Rohe, Modern Architecture, Paul Joseph Watson, Prince Charles, Roger Scruton, Why Modern Architecture Sucks. Bookmark the permalink.

11 Responses to Dirty truths of modernism