As the WaterFire turns 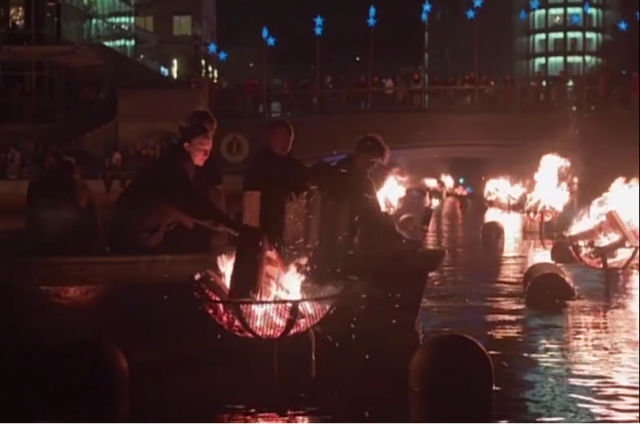 Another day, another accolade for WaterFire Providence. Yesterday, PBS Channel 36 broadcast a segment on WaterFire for its show “Weekends with Yankee,” a 13-part series showcasing visits by plane, train, boat and foot to various exciting places around New England. The segment of this week’s episode called “Land and Water” features extensive footage of the event that, every couple of weeks or so in the warmer months, has enlivened downtown Providence now for 23 years. The scenes of WaterFire are mingled with the dynamic analysis of his work of art by its creator, Barnaby Evans. The segment runs more than eight minutes. 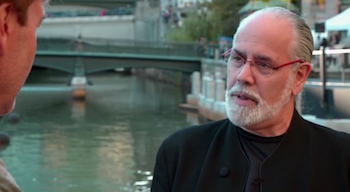 “WaterFire is one of the most spectacular things I’ve ever seen.” That is the opening remark of series host Richard Wiese. Evans replies, “From an arts point of view, it was that immersive idea of touching all your senses. You hear it, you see it, you smell it, you taste it. You feel the warmth on your skin.”

“We use this Promethean sense of fire as a symbol of inspiration and culture and civilization as a trope throughout the night,” he adds, as Wiese watches the fires being stoked by black-clad volunteers in black boats. “Fire and water are both symbols of life, and yet they are mutually self-destructive. Water will put fire out. Fire will boil water away to nothing. And these extremes between light and dart, hot and cool, life and death, are what life’s all about.”

“There’s another element here,” continues Evans. “The civic ritual of the fires burns bright when we light them, and then they tone down when they burn out the fuel. And then we have [boats] that come out of the darkness with volunteers, all volunteers on the boats, and each person adds their log to the fire to make the city bright again. And that symbolic statement [is] that by everyone working together to rebuild the city you can turn the city around. And Providence has completely turned around.”

“This is all part of the performance art that goes on here,” observes Wiese as he glances at the crowds past a lovely fire spinner swinging her flames. “And art transforms. You don’t have to speak a certain language to appreciate art, and this is amazing. This is not a theme park. This is a real living, breathing city that happens to be Providence, Rhode Island.”

Wiese’s astonishment may reflect that of most WaterFire virgins. Every other week or so for half a year, people from around the world visit Providence and see WaterFire for the first time. But many Rhode Islanders and most citizens of Providence are long since veterans of this show. I’ve been to scores of them. Evans introduces new features for each event, so as to maintain the interest of jaded locals, but my own addiction to WaterFire resides in the features that are common to each event – the people, the music (especially the opera segments), the smoke, the eerie phantasmagorical scenery along the beautifully re-opened rivers, with their (new!) classical bridges, parks and river walks, lined with places to sit on walls of granite. Some 40,000 come on most evenings, sometimes thrice that number, and over a million yearly.

Shows like this hosted by Wiese for the magazine Yankee spread the word out farther and farther, stoking future crowds for WaterFire and for the Ocean State and its capital city. Here is a trailer for the 2013 documentary “WaterFire: Art & Soul of a City” – about five minutes. This short version shows video from WaterFire Roma!, the performance of WaterFire on the Tiber River. It is very beautiful, but the Tiber is not really an intimate river. In Providence the strength of each event owes much to the cozy feel of our three downtown rivers and the traditional setting created between 1990 and 1996 for the new waterfront, designed by the late Bill Warner.

It is understandable that Barnaby Evans seeks to expand his empire globally, but I for one think that only Providence offers a proper setting for one of the world’s great continuing artistic extravaganzas. I will be taking a tour soon of the new WaterFire Arts Center, and will try to locate the strategic planning office in which Barnaby Evans and his co-conspirators plot to export Water- Fire around the world. No, I don’t expect to find it, but maybe you can try during the WFAC’s ribbon-cutting event, which will be at 10:30 a.m. next Monday, June 19. Located at 475 Valley St. in the industrial Valley District of Providence, the building opened in 1929 as a factory owned by U.S. Rubber. 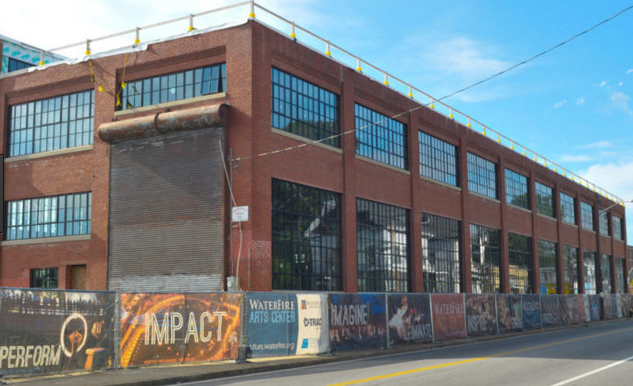 This blog was begun in 2009 as a feature of the Providence Journal, where I was on the editorial board and wrote a weekly column of architecture criticism for three decades. Architecture Here and There fights the style wars for classical architecture and against modern architecture, no holds barred. History Press asked me to write and in August 2017 published my first book, "Lost Providence." I am now writing my second book. My freelance writing on architecture and other topics addresses issues of design and culture locally and globally. I am a member of the board of the New England chapter of the Institute of Classical Architecture & Art, which bestowed an Arthur Ross Award on me in 2002. I work from Providence, R.I., where I live with my wife Victoria, my son Billy and our cat Gato. If you would like to employ my writing and editing to improve your work, please email me at my consultancy, dbrussat@gmail.com, or call 401.351.0457. Testimonial: "Your work is so wonderful - you now enter my mind and write what I would have written." - Nikos Salingaros, mathematician at the University of Texas, architectural theorist and author of many books.
View all posts by David Brussat →
This entry was posted in Architecture, Art and design, Preservation, Video and tagged Barnaby Evans, Channel 36, PBS, Providence RI, WaterFire Arts Center, WaterFire Providence, Weekends with Yankee, Yankee Magazine. Bookmark the permalink.