Ada Louise Huxtable’s first collection of her New York Times criticism, Will They Ever Finish Bruckner Boulevard?, is subtitled “A Primer on Urbicide.” The widely admired book, first published in 1970, is less than the sum of its parts. It contradicts itself page by page, often sentence by sentence. Its failure to re- cognize the nature of the crisis of cities is total. Her columns pit her support for modern architecture against her support for historic preservation. The latter makes no sense in light of the former. Preservation is necessary only because of the threat to cities posed by modernism. Each old building pre- served is a job robbed from a modern architect. They are natural enemies.

But for decades, in part because of the influence of Huxtable’s writing, preservationists have been in bed with the modernists, who have persuaded them to play down their original purpose of saving historic buildings in favor of modernist interventions in historic districts and saving mid-century modern architecture. Huxtable, who died in 2013, has been a primary source of the sort of thinking that nowadays makes it hard for preservationists to support efforts to strengthen the setting of preserved buildings, in part by supporting new buildings today that would have inspired preservation efforts yesterday.

The ham-handed slabs she prefers will never spark a preservation movement.

Huxtable’s columns were published weekly on Sundays in the Real Estate section between 1963 and 1982. In later years she wrote for the Wall Street Journal. As I said in a post on April 1, “The Huxtable joke’s on us,” she ima- gined herself a thorn in the side of the architectural establishment when in fact she was its tribune. She fell hook, line and sinker for the full modernist credo: that modern architecture expresses our times, and that any other type of architecture is obsolete because it is part of history, and therefore not part of the present or the future. Her fiercest barbs were aimed at new architec- ture that compromised with the past or, worse, was inspired by the past.

It’s hard to pluck one quote that epitomizes this attitude, but the following passage from her Dec. 4, 1966, column “Of Symbolism and Flying Saucers” will do. It is about the Cathedral of St. John the Divine, in New York’s Morningside Heights. Begun in 1891 and, with a shift in style from Romanesque to Gothic two decades later, it remains incomplete.

The misconceptions of its builders are reflected accurately in the vicessitudes of its construction. When a church evolved from Romanesque to Gothic from the eleventh to the thirteenth centuries, art and history, not a board of trustees, made the decision. When St. John the Divine was redesigned from Roman- esque to Gothic, Ralph Adams Cram, the Gothic revivalist who replaced the original firm of Heins and La Farge in 1911, opted for the change, and it really didn’t matter. It was not important because neither style grew out of the conditions of the time. …

Out of context, the formula is not reproducible. The same moment and the same results never come twice. Archaeological copying will not make it so. This is an ineluctable reality of art and life. Until it is understood, we will continue to have the pious repro- ductions, the dead reconstructions, the vacuum-packed imitations and the false, nostalgic standards that, at best, evoke only the second-hand suggestion of the artistic glories of some other age, or at worst, throttle creativity and subvert values in our own.

Here Huxtable clings, as always, to her “of our time” mantra. If any of it were valid in the least, then all architecture prior to modern architecture would be illegitimate, because all architecture that predates modernism was based on adherence to precedent. The architects of St. John the Divine were copying only to the extent that they were inspired by earlier work. The client/trustee changed his mind for reasons of fashion (Huxtable assures us) in 1911, but that did not invalidate the work done before or since. There is no specific church they are seeking to replicate stone by stone. Their meticulous labor well reflects the sort of meticulous labor of the pre-Renaissance cathedral builders. Huxtable’s framing of this process as lacking in creativity is a form of dishonesty. Her own writing has made “copying the past” a sort of sin in which specificity falsely stands in for generality. (Almost no new buildings literally copy old buildings.) Her assurance that the new cathedral could not reflect its time assumes that every age is a unitary event; no, it is a collection of a million complexities, most of which flow from the years before. She might have a point if she were decrying work done poorly rather than well, but she was not. She was decrying the use of precedent in art. In short, she was a fool. Hers was a mistake of profound misunderstanding – if she actually believed her own nonsense.

Huxtable makes her errors again and again because she buys into a fiction created by architectural historians covering up for the errors at the root of modern architecture. Historical buildings are pigeon-holed into styles ap- propriate to specific periods based on their differences from styles before and after. However, architectural history is much more a continuum of stylistic change, punctuated by revivals, not a series of more or less discrete jumps from one period to the next, reflecting some sharp turn in the character of a period of time, from which each style allegedly springs. Historians struggle to understand historic periods with the tools of language, thought and hind- sight – architects working in mute materials can hardly be expected to speak with any genuine coherence. Throughout the entire string of architectural periods, old buildings are much more alike than different. That is why his- toric buildings of diverse styles fit so well together on a street. Only since the advent of modern architecture has fitting in been a problem.

Most old buildings spring from the Greco-Roman classical orders (or their predecessors in Egypt and elsewhere). Some adhere rigidly and others loosely, often very loosely, to those ancient precepts. Change came slowly, with successive generations of builders, craftsmen and architects adopting the best practices and technologies to bring measured change that fulfilled the needs of humans and societies far more usefully and creatively than the revolutionary change of modern architecture. Traditional architecture and urbanism grow organically, a process that mirrors nature itself.

In so doing, old buildings reflect time with far more veracity than either modernism – which abhors precedent (or at least pretends to) – or the fraudulent stylistic periods invented by architectural historians and em- braced by Huxtable and her camp followers. This is obvious in any honest and intelligent reading of her collection of columns.

Even her writing isn’t what it’s cracked up to be: her style is often fuddled, no doubt because her ideas lack the cogency required to explicate with clarity. Her prose is not witty but a long sneer at people with whom she disagrees, including the public, for which she has no respect. It is enough for her that modernists may be relied upon to snicker into their sleeves. And yet Will They Ever Finish Bruckner Boulevard should be required reading for every architect interested in correcting the deep and tragic mistakes in the building arts of the past half century and more. Know thine enemy!

A few more photos of St. John the Divine are below, to counteract the slan- der of the critic. 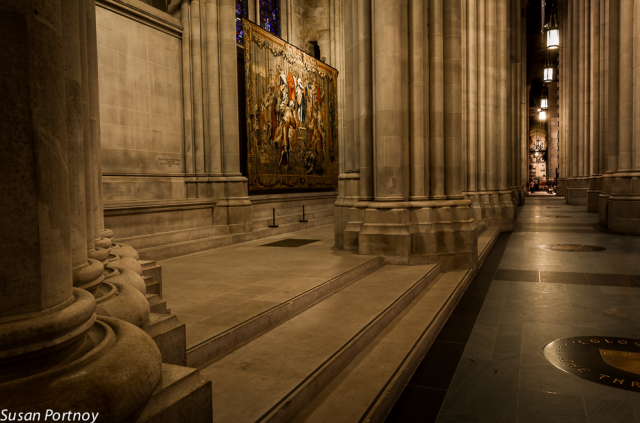 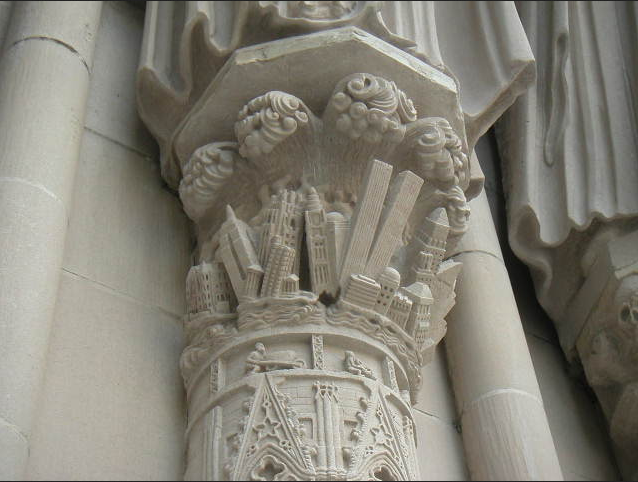 This blog was begun in 2009 as a feature of the Providence Journal, where I was on the editorial board and wrote a weekly column of architecture criticism for three decades. Architecture Here and There fights the style wars for classical architecture and against modern architecture, no holds barred. History Press asked me to write and in August 2017 published my first book, "Lost Providence." I am now writing my second book. My freelance writing on architecture and other topics addresses issues of design and culture locally and globally. I am a member of the board of the New England chapter of the Institute of Classical Architecture & Art, which bestowed an Arthur Ross Award on me in 2002. I work from Providence, R.I., where I live with my wife Victoria, my son Billy and our cat Gato. If you would like to employ my writing and editing to improve your work, please email me at my consultancy, dbrussat@gmail.com, or call 401.351.0457. Testimonial: "Your work is so wonderful - you now enter my mind and write what I would have written." - Nikos Salingaros, mathematician at the University of Texas, architectural theorist and author of many books.
View all posts by David Brussat →
This entry was posted in Architecture, Books and Culture and tagged Ada Louise Huxtable, Cathedral of St. John the Divine, Modern Architecture, New York Times, Preservation, Will They Ever Finish Bruckner Boulevard?. Bookmark the permalink.

8 Responses to Huxtable versus Huxtable