The Pritzker Prize for 2017 was just announced, and while it feels good to continue to celebrate the prize jury’s now years-long retreat from rewarding starchitects, the multitude of excuses offered for the Spanish (or perhaps the Catalonian) trio’s prize leaves one rolling one’s eyes.

It’s been a nine years since the Pritzker went to a standard-issue starchitect, Jean Nouvel, eight if you expand the definition to include Peter Zumthor, and a dozen years since it went to an American, Thom Mayne. This year’s selection was immediately linked by the architectural punditocracy to issues of diversity and multiculturalism. The triumvirate includes a woman. Their national identity, while admittedly European, basks presumptively in the Catalan independence movement. A hint of respect for collaboration and regionalism also characterizes the spin that spun back and forth yesterday between the Pritzker jury and the profession. The idea of nuance, often hard to detect in modern architecture, was also granted copious strokage.

The work of winners Rafael Aranda, Carme Pigem, and Ramon Vilalta, of RCR Arquitectes displays the conventional and now seemingly obligatory ability to design buildings that have little – nay, nothing – in common with their firm’s prior work, or with that of fellow modernists. Some of their buildings have a grittiness that, when it is not too akin to rust, gives them almost a natural appeal that harks back to the best work of Zumthor.

So it is difficult to decide which of their buildings to place atop this post. The Soulages Museum, a cubic Corten-clad building in France, will just have to do. It looks like an alley in the run-down industrial district of the Rust Belt, even though it is in France. I lifted it from an article on fastcodesign.com by Diana Budds, gaily subtitled “RIP, Starchitecture. And Good Riddance.” Its Pritzker coverage, “Three Little-Known Spanish Architects Win Architecture’s Top Prize,” has a relatively extensive slide show of the firm’s work. A second, below, is the El Petit Comte Kindergarten, in Spain. It looks like a cardboard box franchise warehouse painted to look as if it were designed to house machinery for the processing and packaging of very young children. 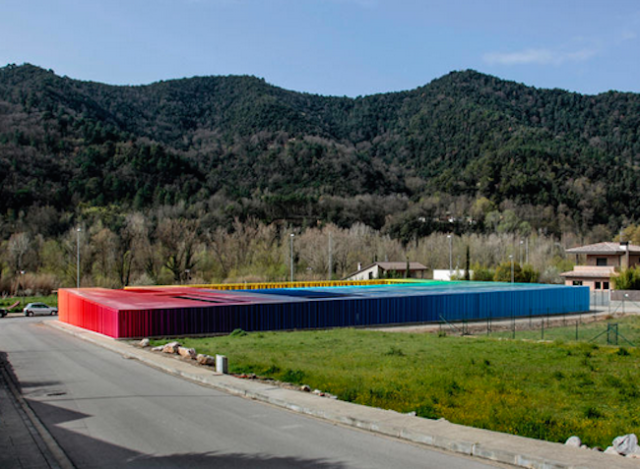 This blog was begun in 2009 as a feature of the Providence Journal, where I was on the editorial board and wrote a weekly column of architecture criticism for three decades. Architecture Here and There fights the style wars for classical architecture and against modern architecture, no holds barred. History Press asked me to write and in August 2017 published my first book, "Lost Providence." I am now writing my second book. My freelance writing on architecture and other topics addresses issues of design and culture locally and globally. I am a member of the board of the New England chapter of the Institute of Classical Architecture & Art, which bestowed an Arthur Ross Award on me in 2002. I work from Providence, R.I., where I live with my wife Victoria, my son Billy and our cat Gato. If you would like to employ my writing and editing to improve your work, please email me at my consultancy, dbrussat@gmail.com, or call 401.351.0457. Testimonial: "Your work is so wonderful - you now enter my mind and write what I would have written." - Nikos Salingaros, mathematician at the University of Texas, architectural theorist and author of many books.
View all posts by David Brussat →
This entry was posted in Architecture and tagged Catalonia, Diana Budds, fastocdesign.com, Pritzker Prize, RCR Arquitectes, Spain. Bookmark the permalink.