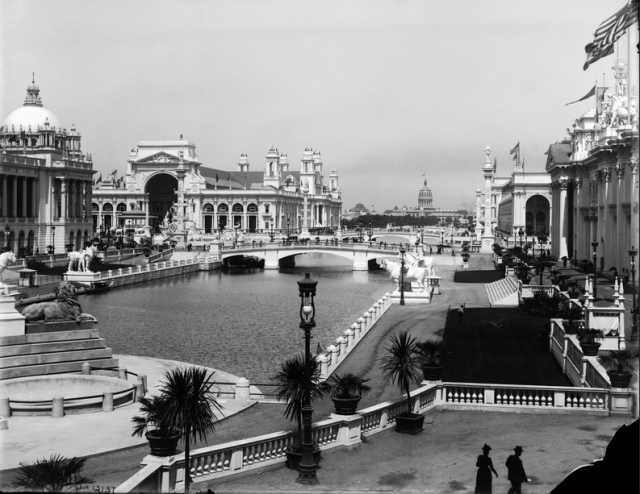 The White City at the World’s Columbian Exposition, Chicago, 1893. (Pinterest)

James Howard Kunstler’s magisterial book The Geography of Nowhere lays waste to the ideas that laid waste to America, but his thoughts on suburbia – crudscape and all that – come after the book’s “opening monologue” about the history of architecture amid the march of society toward modernity. After approaching the conclusion of the 19th century, he writes that “[t]o understand Modernism, it is helpful to consider what immediately preceded it.” He refers to the World’s Columbian Exposition of 1893, in Chicago, along the waterfront of Lake Michigan.

In terms of architecture, the fair was a culmination of all the historical styles that had paraded through the decades of the nineteenth century, like a series of marching bands, each in its own striking constumes – from the Greek Revival of the 1830s, to the Gothic cottages and Italianate villas of Downing’s day, to the Second Empire Mansardic business blocks on every Main Street in America, the Fifth Avenue chateaux of the robber barons, through every other sort of exuberant confection of America’s post-Civil War industrial boom. The Columbian Exposition was the climax, the grand summing up.

After describing its ringmaster, Daniel H. “Make No Small Plans” Burnham, he continues:

The enormous exhibition halls, designed by a Who’s Who of America’s most prominent architects, were done in a high classical manner that went ancient Rome a few steps further – pillars and arches and domes and spires and cupolas and swag-filled entablatures and capitals dripping acanthus leaves, all of it holding to a single unified cornice line. The buildings, the ceremonial arches, and even the lagoons were studded with statuary. Lit up at night by wondrous new incandescent floodlamps, it looked like the climactic scene of Thomas Cole’s “Course of Empire” series. Fair-goers nicknamed it the White City.

Even the usually skeptical Henry Adams gushed: “As a scenic display, Paris had never approached it,” he said. “The world had never witnessed so marvelous a phantasm.” It was especially amazing, he went on, that such a sublime spectacle arose out of the mercantile banality of Chicago. “One saw here a third-rate town of half-a-million people without history, education, unity, or art, and with little capital – without even the element of natural interest except the river, which it studiously ignored – but doing what London, Paris, or New York would have shrunk from attempting.” …

[Charles Follen] McKim saw that this was an architecture worthy of the forward-looking, rationalistic culture of big business and big industry that America had become at the end of the nineteenth century. It was calming, orderly and elegant. It harked back not only to America’s glorious past, but to our deeper continuities with European culture. Its restraint expressed supreme self-confidence and intellectual clarity, not the dark superstition and medieval hugger-mugger of the romantic styles. Its decorative motifs – arched and pedimented windows, columns, pilasters, garlands, roofline balustrades, quoins, cartouches – more straightforward in the sense that you didn’t have to read the novels of Sir Walter Scott in order to appreciate their meaning.

On my bucket list is a trip back to Chicago of 1893, sixty years before I was born there. Sadly, the fair was fake – not really fake, no, but temporary and constructed of papier maché. They were going to tear it down after its run of six months, but it burned down first. Only the Palace of Fine Arts survives. It was rebuilt in solid material, and remains along Chicago’s lakefront. I sure hope H.G. Wells can be revived to crank up his time machine.

This blog was begun in 2009 as a feature of the Providence Journal, where I was on the editorial board and wrote a weekly column of architecture criticism for three decades. Architecture Here and There fights the style wars for classical architecture and against modern architecture, no holds barred. History Press asked me to write and in August 2017 published my first book, "Lost Providence." I am now writing my second book. My freelance writing on architecture and other topics addresses issues of design and culture locally and globally. I am a member of the board of the New England chapter of the Institute of Classical Architecture & Art, which bestowed an Arthur Ross Award on me in 2002. I work from Providence, R.I., where I live with my wife Victoria, my son Billy and our cat Gato. If you would like to employ my writing and editing to improve your work, please email me at my consultancy, dbrussat@gmail.com, or call 401.351.0457. Testimonial: "Your work is so wonderful - you now enter my mind and write what I would have written." - Nikos Salingaros, mathematician at the University of Texas, architectural theorist and author of many books.
View all posts by David Brussat →
This entry was posted in Architecture and tagged 1893 Chicago World's Fair, Charles Follen McKim, Chicago, H.G. Wells, James Howard Kunstler, World's Columbian Exposition. Bookmark the permalink.

1 Response to A Kunstlerfest in Chicago