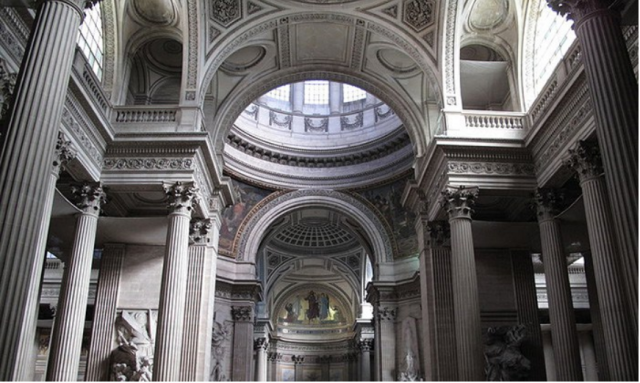 The Future Symphony Institute’s newest fellow, the composer John Borstlap, has written the latest in a string of essays that speak of music in ways that bring to mind architecture. Here is a paragraph from “Classical Modernity“:

Is there any fundamental contradiction found in putting a CD with a Mozart symphony in the player while driving a modern car on a paved road through the suburban sprawl of a big, modern city? Or in performing a piece by J.S. Bach on a piano, or his Brandenburg Concerti on modern instruments? Or in viewing a Vermeer painting dressed in modern “clothes” – the canvas being lightened by carefully adjusted spotlights which were unthinkable in the 17th century? The Historically Informed Performance (HIP) movement in music, which presents music from the past on old, authentic instruments or else on exact copies of them, is a very modern phenomenon and nobody would demand that such performances are presented with the musicians dressed in 18th-century garb, with candles on their music stands. On the contrary, successful ensembles like John Eliot Gardiner’s Orchestre Revolutionnaire et Romantique, though composed of period instruments, use all the modern means and recording facilities available to spread their vision – which does not in the least diminish other possible interpretations of the same music. It all forms a rich palette of varied artistic experience which is the hallmark of true modernity.

This brings to mind the many times I’ve confronted the argument so beloved of modern architects: that a new traditional house is no more appropriate for today than a doctor who bleeds his patients. It is a ridiculous argument, and I have never met a modern architect so breathtakingly stupid that he or she cannot be assumed to recognize its weakness. And yet it is heard over and over again, still to this day.

So enjoy this essay by John Borstlap. He is tapping into the courage required, after all these years, to call out sheer stupidity in argumentation.

This blog was begun in 2009 as a feature of the Providence Journal, where I was on the editorial board and wrote a weekly column of architecture criticism for three decades. Architecture Here and There fights the style wars for classical architecture and against modern architecture, no holds barred. History Press asked me to write and in August 2017 published my first book, "Lost Providence." I am now writing my second book. My freelance writing on architecture and other topics addresses issues of design and culture locally and globally. I am a member of the board of the New England chapter of the Institute of Classical Architecture & Art, which bestowed an Arthur Ross Award on me in 2002. I work from Providence, R.I., where I live with my wife Victoria, my son Billy and our cat Gato. If you would like to employ my writing and editing to improve your work, please email me at my consultancy, dbrussat@gmail.com, or call 401.351.0457. Testimonial: "Your work is so wonderful - you now enter my mind and write what I would have written." - Nikos Salingaros, mathematician at the University of Texas, architectural theorist and author of many books.
View all posts by David Brussat →
This entry was posted in Architecture and tagged Culture, Future Symphony Institute, John Borstlap, Modern Architecture, Music and Architecture, Pencil Points. Bookmark the permalink.