Unfinished pyramidal hotel and other projects in Pyongyang. (Dezeen)

News out of Pyongyang via Dezeen reports that its construction boom is fueled by crystal meth. A drug that jacks up levels of energy, alertness and self-esteem might well be usefully fed to workers undertaking delicate work with rivets while balancing on girders high above the ground. Way to speed the rise of skyscrapers! But I wonder why it has not worked so well on the city’s iconic Ryugyong Hotel? It has reached 105 stories (insists the regime) but its construction has bogged down, not yet having reached completion.

Without necessarily alluding to the brutal speed of modern architecture’s invasion of that field’s establishment in the 1930s and ’40s, I note a new book, Blitzed: Drugs in Nazi Germany, by Norman Ohler. It goes well beyond the old news that Hitler abused drugs. The German chancellor had soldiers and workers blitzed on methamphetamine. This may explain the ability of the Wehrmacht to freak out the French army in 1940. Ohler’s research

unearthed new details about how soldiers of the Wehrmacht were regularly supplied with methamphetamine of a quality that would give Walter White, of “Breaking Bad,” pangs of envy. Millions of doses, packaged as pills, were gobbled up in battles throughout the war, part of an officially sanctioned factory-to-front campaign against fatigue. As surely as hangover follows high, this pharma- cological stratagem worked for a while — it was crucial to the turbocharged 1940 invasion and defeat of France — and then did not, most notably when the Nazis were mired in the Soviet Union.

All this is interesting. Totalitarian regimes have ways of making you ingest stuff your mama would not allow. Workers in Pyongyang scraping the sky on crystal meth may be one thing, but stormtroopers on high are something else. Still, reading these news items I could not help but wonder whether modern architecture is a form of drug abuse. Perhaps the wacky modernist buildings that poke us in the eye as they arise on our city skylines may be attributed to their architects’ ingestion of LSD or other mind-altering psychelelics. I have no evidence of this beyond the appearance of the buildings themselves. I just put it out as a topic for potential exploration by researchers in the groves of architectural history and practice. 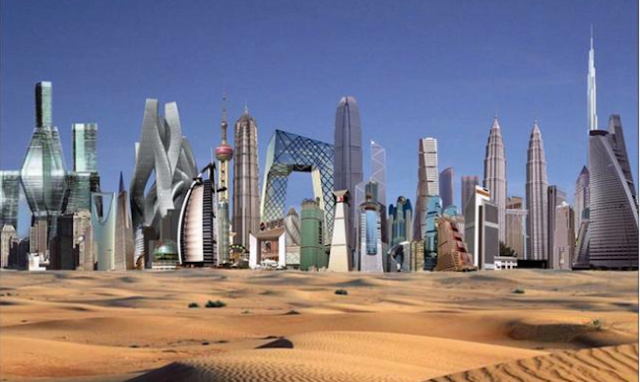 This blog was begun in 2009 as a feature of the Providence Journal, where I was on the editorial board and wrote a weekly column of architecture criticism for three decades. Architecture Here and There fights the style wars for classical architecture and against modern architecture, no holds barred. History Press asked me to write and in August 2017 published my first book, "Lost Providence." I am now writing my second book. My freelance writing on architecture and other topics addresses issues of design and culture locally and globally. I am a member of the board of the New England chapter of the Institute of Classical Architecture & Art, which bestowed an Arthur Ross Award on me in 2002. I work from Providence, R.I., where I live with my wife Victoria, my son Billy and our cat Gato. If you would like to employ my writing and editing to improve your work, please email me at my consultancy, dbrussat@gmail.com, or call 401.351.0457. Testimonial: "Your work is so wonderful - you now enter my mind and write what I would have written." - Nikos Salingaros, mathematician at the University of Texas, architectural theorist and author of many books.
View all posts by David Brussat →
This entry was posted in Architecture and tagged Drug Abuse, Hitler, Hitler's Drug Use, LSD, Modern Architecture, North Korea, Pyongyang, Skyscrapers, Wehrmacht. Bookmark the permalink.