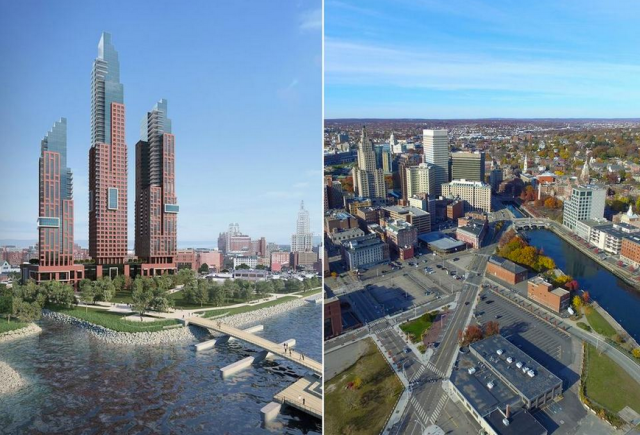 Proposal by the Fane Organization, left, for land next to proposed park. (Fane)

A New York development firm with offices in the Rockefeller Center has proposed to build three residential towers, in phases, rising 33, 43 and 55 stories up from the vacant Jewelry District land where Route 195 used to be. All three would be taller than the Industrial Trust Bank Building downtown (30 Rock is only 15 stories taller than 55). Zoning allows seven stories on Parcel 42, max ten under some circumstances. The Fane Organization says it will seek an exception to this, in addition to an as-yet-undetermined sack of city and state development incentives.

The Providence Journal ran in today’s edition a lengthy story, “Reaching for the sky in Providence,” about the proposal’s unveiling at a meeting of the I-195 Redevelopment District Commission yesterday. Quoting Jason Fane, it read in part:

“This will be an iconic project, and to succeed it’s got to be on a sufficient scale that it’s visible,” Fane told The Journal. “It’s changing Providence, and the commission will have to decide that they want something like this or not.”

If they want it, he said he wants to build it. And if they don’t, he said after the meeting, he’ll go away.

Except for the goofy-looking picture-window pods near the middle of each building’s east-facing façades, the architecture isn’t quite as abysmal as we have all come to expect. Each building mimics a postmodern wedding-cake skyscraper, with a degree of vertical attenuation in each. Each has what appears to be a brown masonry shaft rising from a five-story base (about the height of the average Jewelry District building) upon which all three would sit. Each shaft has what the modernists like to call “punched” windows, as opposed to the glass curtain wall with which each building’s upper stories would reach skyward. From left to right, the shortest building has a stepped roof, the tallest has a set of up-thrusting glass shards, and the middle building’s roof has a rounded element amid its pinnacles.

Being so far and away beyond the allowed height on the parcel – because it is right next to the public park – it is hard to see how the 195 commission can give Fane the go-ahead without essentially saying, “We have our rules, but who cares?” This trio of buildings should be downtown, or in the Capital Center. Capital Center has plenty of unbuilt land, and downtown cries out for more population density. The location of these three new towers will turn Providence’s already bifurcated skyline into a trifurcated skyline. The city may soon be able to boast the same scary cityscape whose isolated towers for the wealthy separate the haves from the have-nots in Blade Runner, Ridley Scott’s dystopian film.

The big question is whether this ambitious proposal is for real or some sort of joke, part of a cynical developer’s real-estate shell game involving players unknown to the commission. Does Fane actually see a market here for the as-yet-unspecified hundreds of apartments and condos they would build, perhaps from booming Boston, or do they take us for rubes holding out bags of tax money for anyone with a quasi-plausaible pitch to grab?

Of course, everyone wants jobs and investment in Providence. But these can be had without accelerating the unfortunate trends that have marred the city’s beauty over the past decade or so. Perhaps the commission can make it clear to Fane that we can do business with them without necessarily making Providence a worse place. Despite our experience since early in this century, development and ugliness are not, in fact, joined at the hip.

This blog was begun in 2009 as a feature of the Providence Journal, where I was on the editorial board and wrote a weekly column of architecture criticism for three decades. Architecture Here and There fights the style wars for classical architecture and against modern architecture, no holds barred. History Press asked me to write and in August 2017 published my first book, "Lost Providence." I am now writing my second book. My freelance writing on architecture and other topics addresses issues of design and culture locally and globally. I am a member of the board of the New England chapter of the Institute of Classical Architecture & Art, which bestowed an Arthur Ross Award on me in 2002. I work from Providence, R.I., where I live with my wife Victoria, my son Billy and our cat Gato. If you would like to employ my writing and editing to improve your work, please email me at my consultancy, dbrussat@gmail.com, or call 401.351.0457. Testimonial: "Your work is so wonderful - you now enter my mind and write what I would have written." - Nikos Salingaros, mathematician at the University of Texas, architectural theorist and author of many books.
View all posts by David Brussat →
This entry was posted in Architecture, I-195 Redevelopment District, Urbanism and planning and tagged Capital Center, Development, Development Subsidies, I-195 Redevelopment District Commission, Jewelry District, Providence RI, The Fane Organization. Bookmark the permalink.