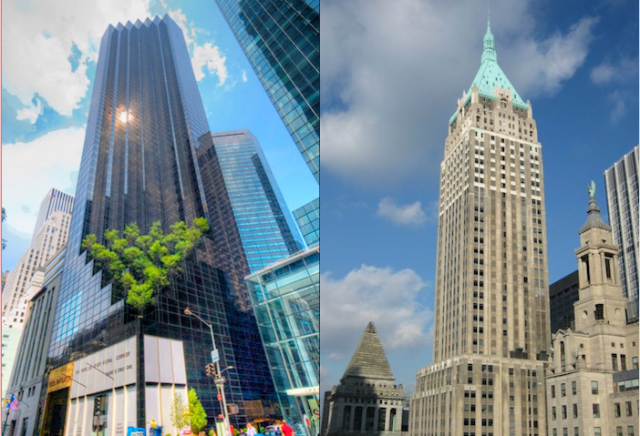 It’s hard to say, to say the least, what, if anything, Donald Trump’s victory may mean for architecture. It is easier to imagine that a Hillary Clinton win would have meant more of the same for how we build. Trump is not just a reality show host: he is a real-estate developer who specializes in the big and glitzy. Are the “style wars” between traditional and modernism on his radar? Maybe. Maybe not.  Does Trump Tower, where the victor had his campaign headquarters, reflect his architectural taste? It probably does. Not good.

Nevertheless, like last night’s electorate, it is possible we could be surprised. The Trump property that got the most play in the campaign aside from his tower was his new Post Office hotel in Washington. It is a new hotel but a historic building. There is also the Trump Building, in New York, a classical tower completed in 1930, for a month the world’s tallest building, and one that reflects the heroic era of Manhattan’s skyscraper skyline culture.

I don’t know Trump’s inner circle well enough to identify anyone who might stand up for tradition in architecture. As a sometime Republican and sometime conservative, he surely must feel some sort of kinship with the idea of tradition. In the hope and expectation that surround his new job, let me suggest a couple of interesting possibilities for developer and soon-to-be-president Trump to consider.

First, granting the number of larger issues on his plate right now, he should at some point consider reviving George W. Bush’s nomination of Thomas Gordon Smith, or a classicist of equivalent eminence, as the chief architect at the General Services Administration. In that job the Notre Dame professor could help even out the playing field for traditional architecture in future federal buildings, which the GSA controls. It has been staunchly modernist for decades. Smith’s nomination in 2006 caused a firestorm of protest from the usual suspects, and Bush, showing uncharacteristic wussitude, withdrew the nomination. Let Trump put Smith up for the same post.

Second, Trump will have the opportunity to tap into the thinking of City Journal, the quarterly of the Manhattan Institute, as he develops his strategy for the nation’s inner cities. The City Journal is not just a fount of policy ideas; it is also a proponent of the classical revival, having run many excellent essays over the years on traditional architecture and classical architects. 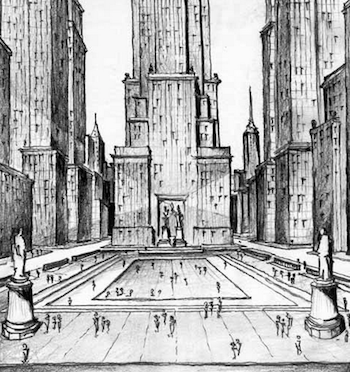 It is City Journal that weeks after 9/11 published the classical proposal for the World Trade Center rebuild, designed by the firm of Franck Lohsen McCrery Architects. Their excellent proposal never made any headway in the WTC design competition because that competition put its thumb on the scale for entries that were “of our time” – that is, which represented the chaos of our era. This is the same chaos that President-elect Trump has a mandate to reverse. The World Trade Center as it has emerged represents the taste, perhaps, of Donald Trump, but of the establishment for sure. Maybe Donald Trump will understand that architecture can be a symbolic indicator of his supposed desire to recast the establishment as a vehicle for making America great again, and, as he says, to heed, once again, the voices and the tastes of the average American citizen.

One more suggestion: The Donald should see to it that an early grave is dug by Congress for Frank Gehry’s Ike memorial design.

This blog was begun in 2009 as a feature of the Providence Journal, where I was on the editorial board and wrote a weekly column of architecture criticism for three decades. Architecture Here and There fights the style wars for classical architecture and against modern architecture, no holds barred. History Press asked me to write and in August 2017 published my first book, "Lost Providence." I am now writing my second book. My freelance writing on architecture and other topics addresses issues of design and culture locally and globally. I am a member of the board of the New England chapter of the Institute of Classical Architecture & Art, which bestowed an Arthur Ross Award on me in 2002. I work from Providence, R.I., where I live with my wife Victoria, my son Billy and our cat Gato. If you would like to employ my writing and editing to improve your work, please email me at my consultancy, dbrussat@gmail.com, or call 401.351.0457. Testimonial: "Your work is so wonderful - you now enter my mind and write what I would have written." - Nikos Salingaros, mathematician at the University of Texas, architectural theorist and author of many books.
View all posts by David Brussat →
This entry was posted in Architecture, Urbanism and planning and tagged City Journal, Donald Trump, Eisenhower memorial, Frank Gehry, General Services Administration, GSA Design, Manhattan Institute, Thomas Gordon Smith. Bookmark the permalink.