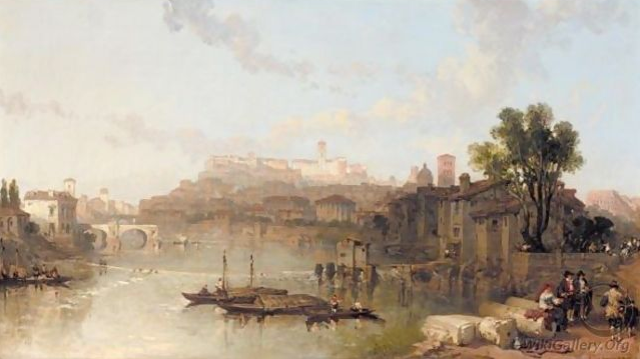 View from the Tiber of the Palace of the Caesars, in Rome. (wikigallery.org; artist?)

As we saw in his novel The Princess Casamassima, Henry James indulges himself in his descriptions of cities. In Daisy Miller, he describes the ruin of the Palace of the Caesars, and the Colosseum, in Rome:

A few days after his brief interview with her mother, [Mr. Winterbourne] encountered [Daily Miller] in that beautiful abode of flowering desolation known as the Palace of the Caesars. The early Roman spring had filled the air with bloom and perfume, and the rugged surface of the Palatine was muffled with tender verdure. Daisy was strolling along the top of one of those great mounds of ruin that are embanked with mossy marble and paved with monumental inscriptions. It seemed to him Rome had never been so lovely as just then. He stood looking off at the enchanting harmony of line and colour that remotely encircles the city, inhaling the softly humid odours and feeling the freshness of the year and the antiquity of the place reaffirm themselves in mysterious interfusion.

When, on his return from the villa (it was eleven o’clock), Winterbourne approached the dusky circle of the Colosseum, it occurred to him, as a lover of the picturesque, that the interior, in the pale moonshine, would be well worth a glance. He turned aside and walked to one of the empty arches, near which, as he observed, an open carriage – one of the little Roman street-cabs – was stationed. Then he passed in among the cavernous shadows of the great structure, and emerged upon the clear and silent arena. The place had never seemed to him more impressive. One half of the gigantic circus was in deep shade; the other was sleeping in the luminous dusk. As he stood there he began to murmur Byron’s famous lines, out of Manfred. …

Someone recently informed me that there is a collection of James’s writings on cities and architecture. If I can find that, then I can write this blog without doing any work of my own!

This blog was begun in 2009 as a feature of the Providence Journal, where I was on the editorial board and wrote a weekly column of architecture criticism for three decades. Architecture Here and There fights the style wars for classical architecture and against modern architecture, no holds barred. History Press asked me to write and in August 2017 published my first book, "Lost Providence." I am now writing my second book. My freelance writing on architecture and other topics addresses issues of design and culture locally and globally. I am a member of the board of the New England chapter of the Institute of Classical Architecture & Art, which bestowed an Arthur Ross Award on me in 2002. I work from Providence, R.I., where I live with my wife Victoria, my son Billy and our cat Gato. If you would like to employ my writing and editing to improve your work, please email me at my consultancy, dbrussat@gmail.com, or call 401.351.0457. Testimonial: "Your work is so wonderful - you now enter my mind and write what I would have written." - Nikos Salingaros, mathematician at the University of Texas, architectural theorist and author of many books.
View all posts by David Brussat →
This entry was posted in Architecture, Books and Culture and tagged Ancient Ruins, Colosseum, Daisy Miller, Henry James, Palace of the Caesars, Palatine, Rome. Bookmark the permalink.