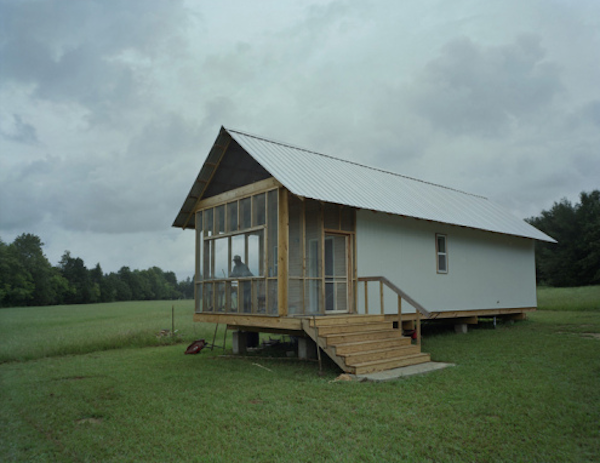 Rural Studio is an architectural outfit in Alabama that strives to produce houses for $20,000. The website Misfits’ Architecture posted on Rural Studio recently, listing the small, affordable houses by major firms and architects that cost more, often much, much more. Even the excellent Katrina Houses, created after the hurricane by Marianne Cusato, are said by the misfits to be “deliverable at $70,000 including construction.” The misfits’ post ended up praising Rural Studio for its commitment to the housing needs of poor and minority communities.

The misfits’ post was filled with examples of how the firm uses iterative learning processes to ensure that each of their projects is founded on firmer design and construction principles than the one before it. Supposedly they are designed with more rigor than a jet fighter. So, as one will be driven to expect, there is a lot of fascinating “inside baseball” design stuff in the post – fascinating because it is so rarely encountered in journalism on architecture (no less rarely than on my own blog, I must admit).

Founded by Samuel Mockbee and Dennis Ruth in 1993 (who died in 2001 and 2009 respectively), the firm’s leaders seem to have the funny idea that Mockbee and Ruth might be appropriate candidates for the Pritzker Prize. They should aim higher. The Driehaus Prize brings in $200,000, twice the Pritzker dollop. However, the firm would have to try harder to design houses the people can not only afford but love. To judge by the post’s images, Rural Studio produces houses that have that “I wanna be practical but I also wanna appeal to Progressive Architecture’s editors” look. Their whole outlook on design and building suggests that they are above that. But they needn’t worry about getting a Pritzker (a downer for anyone with taste), because

Actually, Rural Studio is not a practice or even a firm but an undergraduate program in the school of architecture at Auburn. So maybe it is not really allowed to produce a house that looks particularly like a house. Aside from that, Rural Studio reminds me of Union Studio, in downtown Providence, a firm that produces (among other things) affordable housing that looks really lovely. I can’t say costs are sufficiently low to be comparable to Rural Studio, but for a city practice they seem to have their hearts in the right place.

Anyway, readers should check out the post, and, along with me, doff their hats to Malcolm Millais, who sent it to me.

“The 20K House Is Bullsh*t” is John Anderson’s rejoinder to my piece and others’ about Rural Studio. On his blog RJohnTheBad.wordpress.com, Anderson says required costs related to housing and code regulations, such as the cost of digging a required well, are improperly omitted from the studio’s figuring, and that $20,000 to buy a 20K House is “aspirational.” Rural Studio admits that it has not yet achieved a true 20K House, but is working toward it. I must leave it to others to judge this alleged gap between rhetoric and reality.

This blog was begun in 2009 as a feature of the Providence Journal, where I was on the editorial board and wrote a weekly column of architecture criticism for three decades. Architecture Here and There fights the style wars for classical architecture and against modern architecture, no holds barred. History Press asked me to write and in August 2017 published my first book, "Lost Providence." I am now writing my second book. My freelance writing on architecture and other topics addresses issues of design and culture locally and globally. I am a member of the board of the New England chapter of the Institute of Classical Architecture & Art, which bestowed an Arthur Ross Award on me in 2002. I work from Providence, R.I., where I live with my wife Victoria, my son Billy and our cat Gato. If you would like to employ my writing and editing to improve your work, please email me at my consultancy, dbrussat@gmail.com, or call 401.351.0457. Testimonial: "Your work is so wonderful - you now enter my mind and write what I would have written." - Nikos Salingaros, mathematician at the University of Texas, architectural theorist and author of many books.
View all posts by David Brussat →
This entry was posted in Architecture and tagged Alabama, Auburn University, Dennis Ruth, Driehaus Prize, Malcolm Millais, Pritzker Prize, Rural Studio, Samuel Mockbee. Bookmark the permalink.

1 Response to Decent guys as architects